We plan to print a few parts directly on the build platform, w/o supports. Right now I measure a z-height offset of appr. 0.56 mm when printing a square. This seems to be in the correct ballpark claimed by Formlabs (~0.5 mm z height offset). We would like to minimize this values to some degree to get rid of some of the burr at the bottom of the printed parts.

My question to you guys: Did you reduce the z-height offset in the printer settings to reduce the squishing / the burr at the bottom of the parts? And if yes by how much? What z-height offset would one need to still print rather “securely”?

Also experimenting with that at this very moment with Tough V5. I have often printed parts without supports but I didn’t care about the burr and the z squishing on the first millimeters, this time I do to a certain extent.

Setting a positive Z offset on th printer may indeed help in reducing the burr but will also reduce the adhesion to the BP so it’s to be experimented with. The offset value depends greatly on the part being printed (surface area in contact with the BP and geometry) and the resin. Sanding the BP will help increase first layer adhesion to.

I am currently printing with a +0.3mm offset which has become my standard recently (much easier to detach parts and no failures yet), I will try to increase it until the deformations are acceptable or until the adhesion isn’t good enough.

EDIT : I just passed the first 50mm successfully. The first layers of the part can be roughly described as a tube (outer Ø 35mm, inner Ø 30mm, total surface area in contact with the BP is about 225mm^2). The print still has 1.5h to go.

In the meantime I had some relevations:

I have started a new print at +.3mm just like the previous one (just some small alterations irrelevant to our discussion). Regarding the burr, I am getting a .2mm geometry on the external Ø of my tube on the side that is opposed to the wiper, and the same geometry on the inside Ø on the same side as the wiper. This is pretty logical since it follows the sideways movement of the tank during the peeling operation.

We will test these two parts and if they are functional with the burr we’ll leave it at that. Otherwise I’ll try sanding the PB and increasing the Z offset. I have not measured the actual offset of my machine but I also have two BP so I’ll look into that ! Curious to know if you get good results with more than .3mm.

Unfortunately both my 0.3 mm and 0.4 mm offset prints failed and the part was stuck to the resin tank. Will stick to 0.2 mm now. At least that already helps a bit. The rest will be compensated either in CAD or in Meshmixer. Until Formlabs decides to implement this feature: Compensate real z offset in Preform

Really bad news on this topic:
I printed a testpiece to see how much the real z offset is for both my BPs. The test piece looked like this:
https://formlabs.com/de/dashboard/shared/#shared/1489526d-f81d-4df8-81a6-e5f30fdc11c0

The build area is both tilted (which we cannot compensate for) and
slightly concave. I.e. a Z offset which works well in the middle of the BP does not necessarily work well at the edge of the BP.

So yeah. Compensating like this is kind of Sisyphus work. Will work once, then do it again.

Imho you are better off using supports, even with parts positioned fully parallel to the build platform surface. Unless you really do not care about z height in any shape or form (e.g. figurines, toys).

Yes, all the build plates we have used for the last 3 years were concave.
We systematically CNC machine our BP when we receive them. They can be up to 0.5 mm off.
However the tilting can also come from the tray holder. If all your BP tests are exhibiting a tilt, you can adjust this with the torx screws that are at the top of the holder.

Thanks Olivier for that info.

Yes, both BP are tilted ~ 0.5 mm to the FRONT side. However I am unsure about compensating this, as A) afaik this is designed to help the peeling process of the first few layers (??) and B) this will probably change for other trays? I.e. I would have to re-calibrate for each tray?

Would be very happy to hear about your experiences, especially regarding the latter question! TY!!

@JohnHue What a great idea, can’t believe it never occurred to me to play with increasing my Z offset to reduce distortion of the first few layers.

@Olivier_Nicolas I don’t suppose you’re selling flattened BP’s? I have some very thin parts printed directly on the BP (only a few layers thick) and it’s a nuisance always having to refine the height in my model when re-situate the part on the BP.

Not really but I can help.

@Formlabs:
Just wanted to let you guys know that I am REALLY fed up with those concave build platforms now. In an current job I had like 3 failed prints in a row when before everything worked 100% fine. Cleaning the resin tank, lowering z height etc - all of which you suggest (https://support.formlabs.com/hc/en-us/articles/115000157564-Non-Adherence) did not help. Why? Because this is the BP after cleaning with IPA: 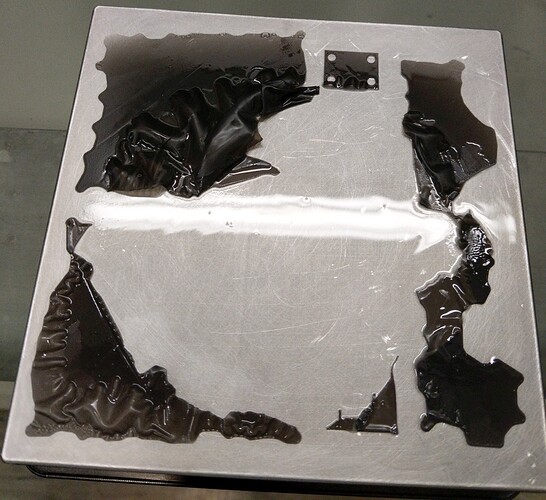 Guess what? The print adheres fine at the edges and delaminates in the middle. Just maaaaaaybeeeee this could be because the mid point is approximately 0.4 mm to 0.5 mm lower than the edges for both my BPs? Maaaaybeeeeeee? Quality control?

@Olivier_Nicolas: Will try to CNC my BPs now, too. Sad that one has to do that to get a 5k€ printer working as intended. Will also listen to you and compensate for the 0.5 mm tilt I saw in the prints.

Yes, typical.
You need to machine your surface.
If you use a CNC, make sure you do not compress the plastic base laterally and vertically too much.
The best is to make a machine fixture with… your form 2!
We use Rigid for this.

Have you sanded the base plate?

Is there any really good reason not to use the supports?

@billb: If you mean build platform with “base plate” then yes, I sanded it with 180 grid.

Also ordered a new build platform - Formlabs support told me that sanding the build platform will cause the parts to not stick anymore… so … who do you believe now?

The build platform you have definitely looks concave. That is something they should replace if still under warranty. I was told that rough build plates hold parts better though I never had that as an issue on my machine. Wonder why they say differently now?

If you mean build platform with “base plate” then yes, I sanded it with 180 grid.

Then that’s where the problems start. Unless the abrasive paper is supported on something that is wider than the build platform there is a tendency for the plate to be hollowed in the centre.

It would probably be easier just to buy a new build platform.

Then that’s where the problems start.

The 230 mm x 280 mm 160 grid wet sandpaper was supported on a granite plane table (marking plate). So no, that was not where the problem started, this was where the problem was stopped. And even if I sanded it by hand: With a 180 grid sandpaper you will have a HARD time sanding off 0.5 mm of the middle of the BP. Just try to sand of that amount of material - not with 40 grid, but 180 grid.

In the meantime I did indeed order a new BP at a local electronics store and what should I say? Plane af. I was really surprised, but to our measurement capabilities, the new BP was plane to within +/- 20 µm at least. So both the other BPs were indeed faulty and should not have been shipped like this. In the meantime we CNCed and sanded both BPs plane and on one of those I have the second successful print ongoing right now. “Problem solved” so to say…

Great to see that your problem is resolved.
Also we tend to inspect the build plate after the first layer peeling.
If some of the base layer shows un-sticked from the BP, we pause the print, remove the BP, remove excess resin from it, re-stick the base layer in position with fresh resin and place the BP in our UV post curing chamber for a few seconds. The we put it back in the printer and resume the print,
This will ensure a super strong adhesion of the remaining layers and stabilize the entire print.

Generally speaking, it is a good QC practice to inspect the first layer after the first peeling cycle…