Grey V4. Please take this product off the shelf

I’ve been working with the Form 2 for a few years now. I’ve had great prints, passable prints, and failures. And so far, I can look at the failures and identify why they failed and how I can improve going forward. However, I pop in Grey V4 and a new tank and I’m excited to see what their new formulation can do only to be left disappointed time and time again.
My first thought is the optics need cleaning. I do that, same problem with a different test print. Ok, I do a sanity check and pop in another resin and it’s matching tank and print a flawless model…
Back to grey v4, another model, same issue. Please fix the grey v4 print profile or take it off the shelf.

Thanks so much for taking the time to voice your frustrations. That doesn’t sound like a good experience at all with Grey V4.

We haven’t heard widespread complaints with the issue you’re outlining here. That’s not to say your concerns aren’t valid. Anything that prevents you from printing the way you want should surely be addressed as efficiently as possible.

In general, I would highly recommend reaching out to our support team so they can investigate what might be going on a little more closely, but if you’d like, I’d be more than happy to take a look at any pictures of your unsatisfactory print results here to maybe offer some recommendations about what to do next.

Again, I’m so sorry for the difficult time you’ve had with your recent prints. Hopefully, we get to the bottom of it so you can get back to printing ASAP.

I would suggest that you do a search on these forums for “Grey V4 problems” or “Grey V4 Failure” to see that it may be more widespread than you think.

If you need a specific thread with pictures and a summary of the many issues with this resin please see this post also on this forum.

Hi Guys, I’m wondering if anyone could help me regarding slightly deformed/skewing of prints? I’m try to print jewellery designs which need to be quite accurate, and being an obviously visual item they need to look nice and as close to perfect as possible (who wants to buy a misshapen ring?) Here are a couple of images to show what I mean: [Print%20Distortion%201] [Print%20Distortion%202] When compared to the CAD model, the cut outs that go under the stones are not coming out sharp and s…

If you read through that thread, you see that it ended up being an optics issue. As @DKirch stated, Grey is usually the least problematic resin Formlabs has. It is usually the best performing resin they have and all of our customers love it. It also happens to be the resin we sell the most of. It is strange that you are experiencing these issues. Hopefully opening a service ticket could help in diagnosing the problem.

That was what the last comments mentioned, but the topic was closed before an actual resolution was formed. That was also just the first post I found with a simple search of this forum for “Grey V4”. There are other similar posts that are out there referring to quality issues with V4 however all formlabs responds with is that they have tested it and it works fine. Even after admitting that V4 has a problem with foaming.

When can we expect to see the next iteration of Grey?

Thanks for the reply!

I did a search of our forums yesterday evening, and had a sync with our services team to make sure there weren’t any widespread Grey V4 issues I wasn’t aware of, and they said they’re not seeing anything out of the ordinary right now in terms of incoming support tickets.

Again, this is not to say you’re not seeing the issues you’re seeing, and we’d love to lend a hand to figure out what problem you’re running into.

At this time there are no plans that I’m aware of to release another iteration of Grey, but I’ll be sure to let folks here know if we do!

I for one liked Black v2 a lot better than Black v4. And it had incredible shelf life.

I tried one litre of grey V4 and had so many problems I just switched to a 3rd party resin.
Here is one of my posts:

Has anyone had any issues with V4 not printing overhangs that V3 could handle no problem?

As the original poster of Grey v4 always slightly deformed/skewed
I can confirm that the issue was absolutely not resolved with optics cleaning (attempted multiple times).

In fact I have since given up on using the Form 2 because of this, as I haven’t been able to get a useable print from it. I don’t quite have the time or willingness to invest in a whole new resin tank and cartridge to rule those two out as problems, especially as I’m not the only one with these kind of problems I think it might be a futile effort and a (further) waste of money.

This is precisely why I think Formlabs needs to take a step back and stop defending Grey V4. There are obviously variables out there that are causing issues with the resin that Formlabs has not taken into consideration. I think one of the primary issues that it has is the lack of crisp edges around support touchpoints. I.E. if a cube were printed at an angle (based on automatic setup via Preform) the point at which the touchpoint meets the part will bridge to the next touchpoint on the default settings from Preform. Here is a sketch of this issue: 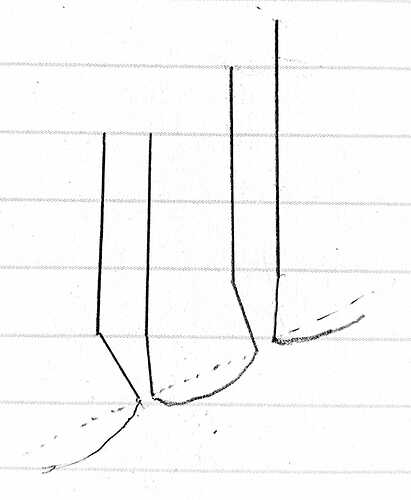 The dotted line is where the edge should be. Solid line what the result normally is in this situation.

Yep, I get that too. Working with jewellery where a tiny touchpoint makes a lot of difference between a good prototype for the customer to proceed and a terrible one, I’m not really happy with this result (if it actually prints).

Since I started using gray v4 I have never had a good impression. With gray v3 I never had any problems. I bought a new tank, cleaned the mirrors and it doesn’t improve anything. I spent a lot of money on a new tank without having to, spent almost an entire cartridge repeating jobs and testing every possible position with no result. People who aren’t complaining about V4 are probably not printing small, thin parts but only a blind person can’t see the various complaining topics about gray v4.

On the issue of black, I agree. I have not had a formulation of Formlabs black that worked, consistently.
I voiced my concern via a troubleshooting ticket and moved on…right to the Grey V4 and haven’t looked back.

I have not had a failed print in Grey V4 that wasn’t due to an error of my design. Either in not using enough supports (trying to save on post clean up) or not checking the tank’s clarity first. The Grey V4 is my go-to resin followed by clear and then white.

I print parts that have very thin walls, 1.0-1.5mm and some overhang. I am unable to post images due to copyright but I’m not just printing big things lacking fine details. If that were the case, I’d have kept my FDM printers.

Have you tried .7mm walls yet?

As a matter of fact, I am right now. A 5 hour print with several walls at .5mm thick.

Can you post pictures or is it under an NDA?

I can show some, from limited angles and with some areas redacted. The thinnest area which did print fine is .376mm thick. These are the areas where the light easily penetrates through. 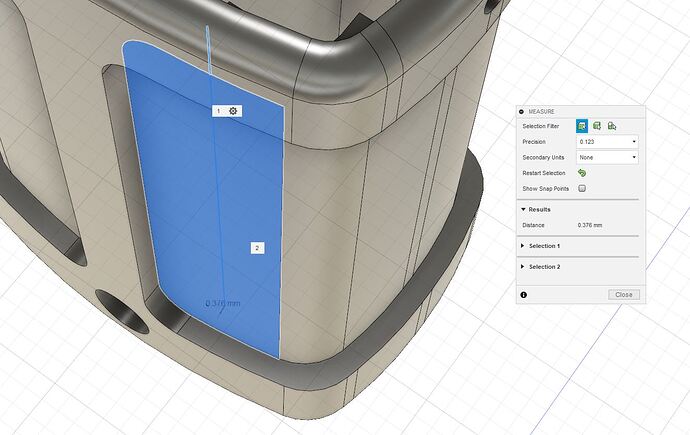 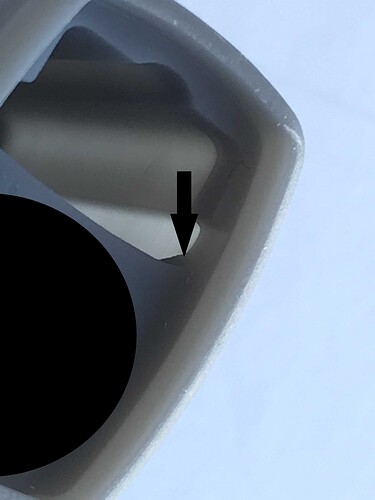 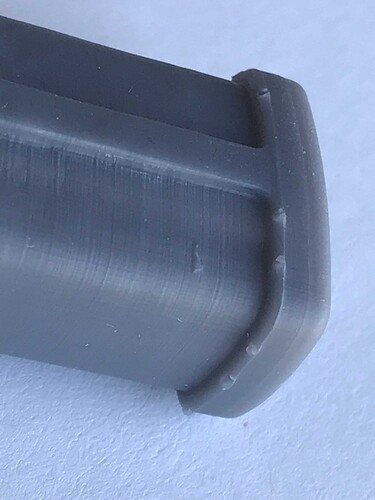 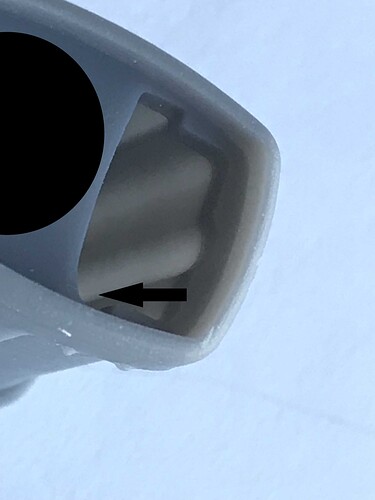 I inserted arrows to areas that were not crisp angles as they should have been.

This was printed at .025 and yet I have lines so I’m trying a different orientation.