Can't get parts to stick to the bed. Pictures inside

I’m having an issue that has stalled my production completely. Around two weeks ago my parts went from being VERY stuck to the bed (i print almost exclusively tough resin) to one part out of the platform not building, then two, etc.

I changed the bed and tank and now almost nothing sticks. I’ve gotten a few small prints, maybe 25% success since a few weeks ago. I’ve moved parts around the build area with no success.

Lowering the z-axis by .1mm got me exactly one successful print of two parts, after that every print has had at least one part not stick to the bed. Here are a few pictures, there were supposed to be multiple parts on the bed, and also pictured is the bottom surface of the successful prints I got, you can see what I believe is layer delamination, and perhaps where parts aren’t sticking to the bed on the base: 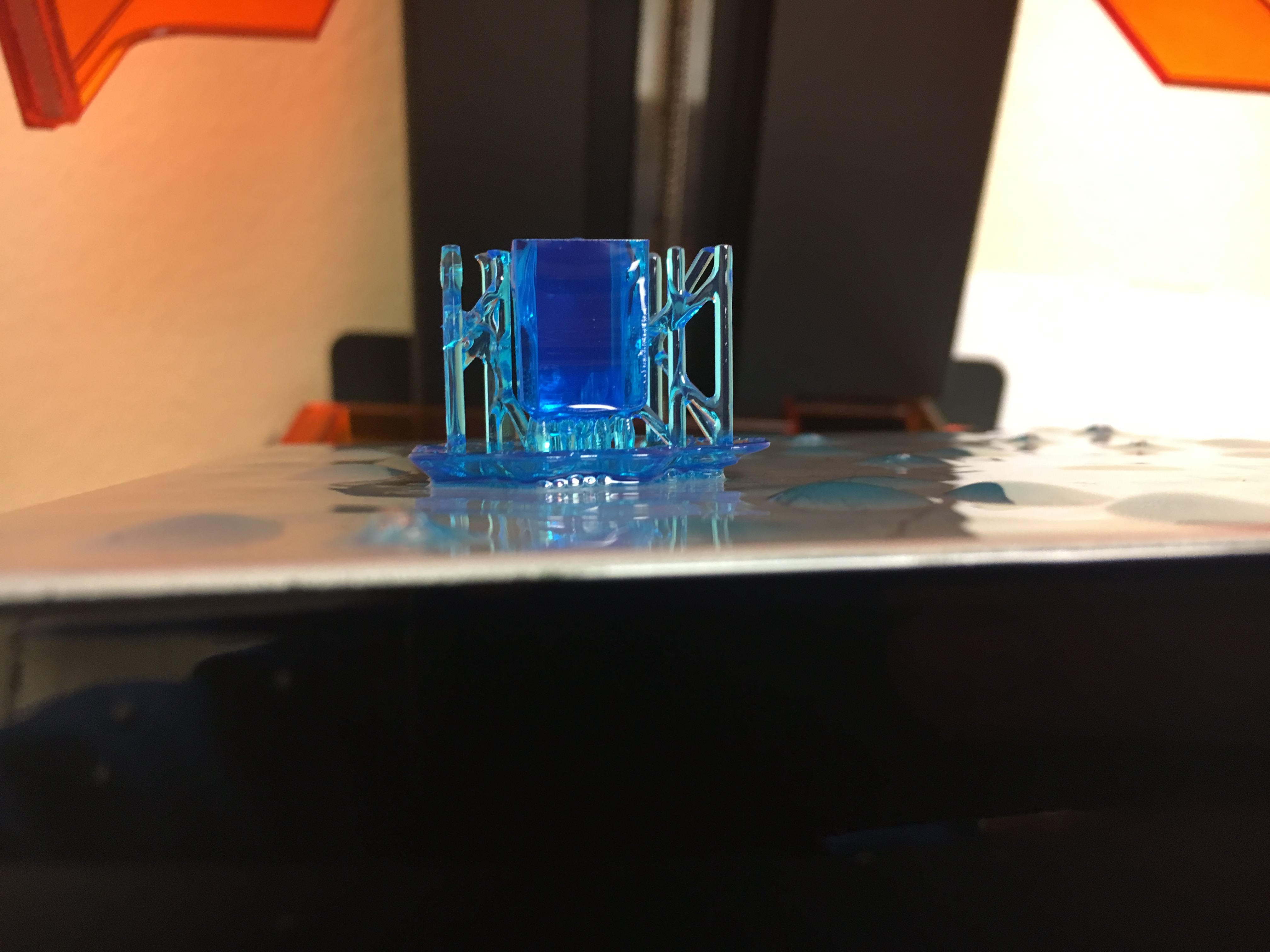 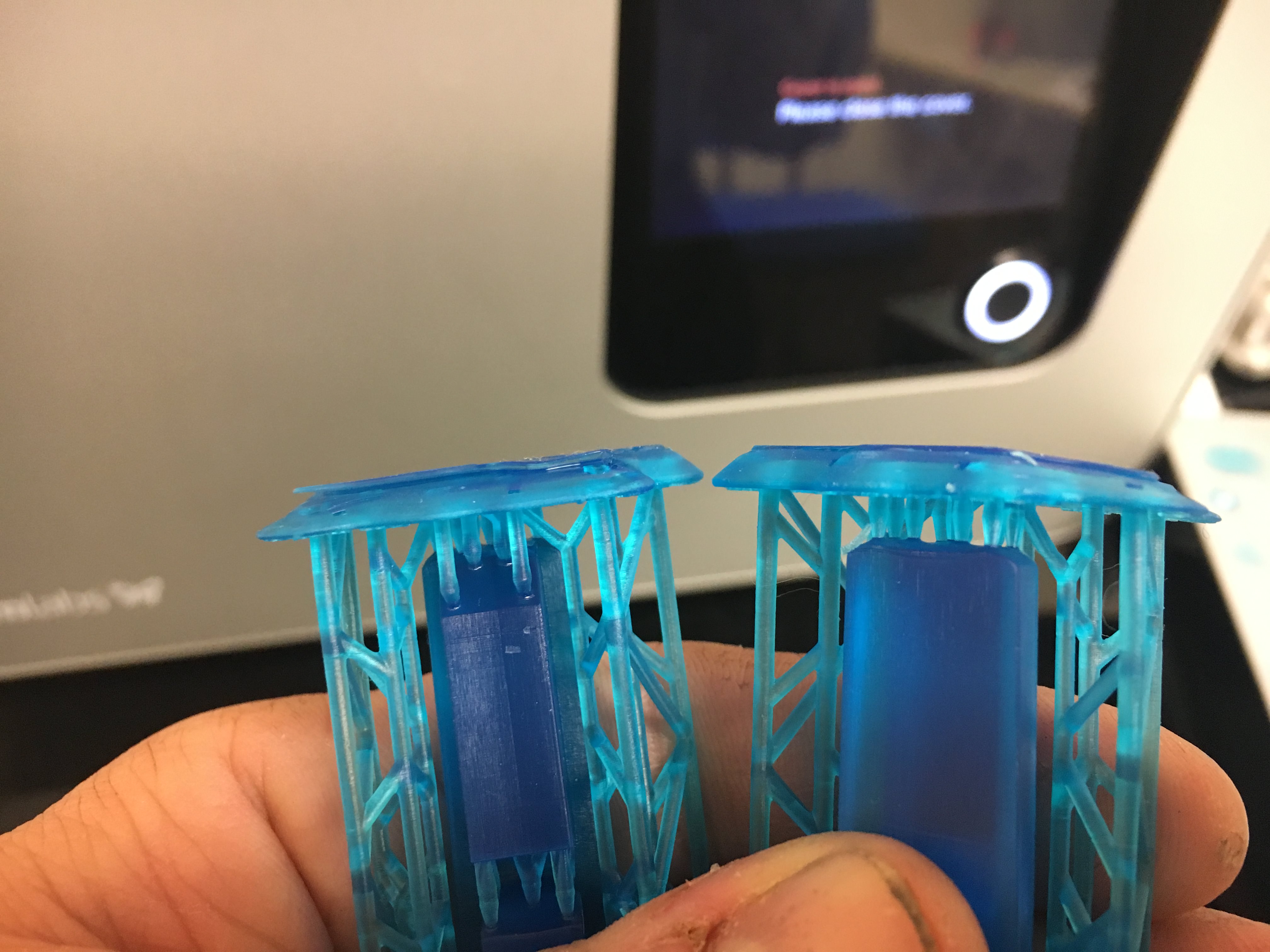 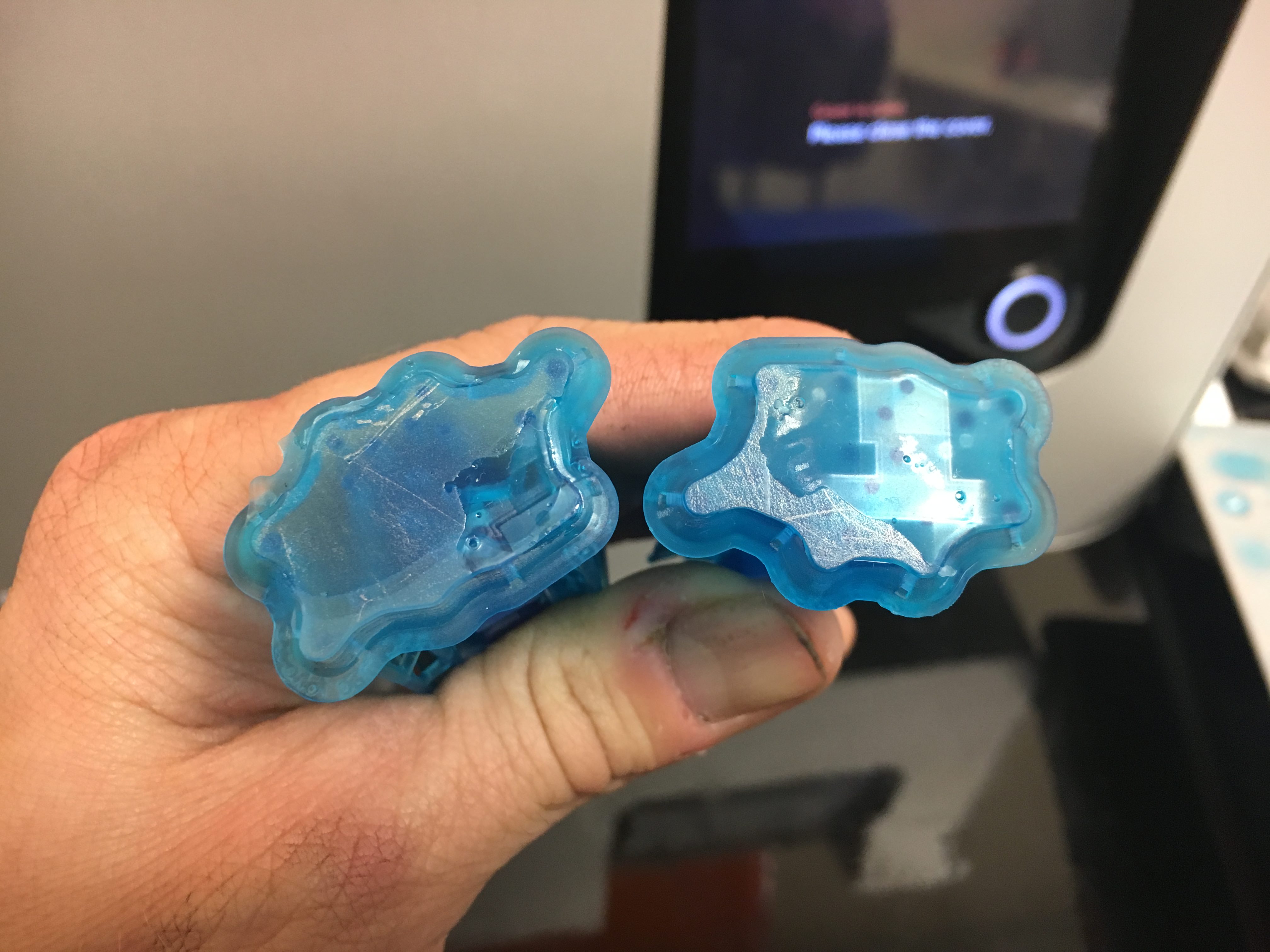 I’ve forwarded this to our process team so that we can ensure recent updates aren’t leading to poor part adhesion. Have you been able to check your optical window and tank for any debris or clouding? Poor adhesion tends to be caused either by under-cured parts or under-compression of the early layers.

If you don’t see any artifacts on the tank or optical window, can you try lowering the Z axis a bit more? Iterating downwards to -1mm is safe, and might help to correct this.

I did have the firmware update recently, but it didn’t change anything in terms of parts building successfully.

Will try a print at -.3mm z height. There isn’t excessive clouding of the tank, much less than previous ones I’ve replaced simply because I’m new to SLA and didn’t know when they needed to go exactly.

One thing of note, this only happened once, but after a print failed there was a large circular cloudy ring on the tank, not near where I was printing. It was various obvious and odd at first, but quickly faded a lot. Not sure what would ever cause this.

Lastly, I wish the Formlabs crew had a bit more continuity in their support/technical questions. I’ve received several answers that almost conflict with each other regarding adjusting z axis, cure settings, material properties etc.

You should note that Tough ‘clouds’ tanks differently than other resins. It will be more of a yellowing of the tank and is most easily seen if you take your tank out of the printer and place it over a white sheet of paper in a well lit room. Use the scraper to move the resin around to see the PDMS easily.

Double check that your build platform is nice and clean before you print next time. Use some IPA and a paper towel to wipe clean and dry the build face and sides. Just my $0.02 for sanity checks - consider opening a support ticket if this persists. Good luck!

I haven’t ever noticed any yellowing of our tanks, but definitely some clouding.

We do always clean the bed very well with 99% IPA and a shop towel, and scrape it before wiping and then check after to make sure stuff is as clean as possible.

I sent in two support tickets early last week but the crew said they hadn’t received them when I called. Open another late last week but haven’t heard back yet.

Have another print going at -.3mm now, will be able to see if it’s sticking here in a bit. My biggest concern is if this works, why was such a big difference needed? With FDM .3mm nozzle change is huge, SLA it would seem to be even more with the resolution difference.

Here is -.3mm layer height. About the same result as I had 0 with no adjustment, although I will say this stuck and sometimes 0mm would fail. 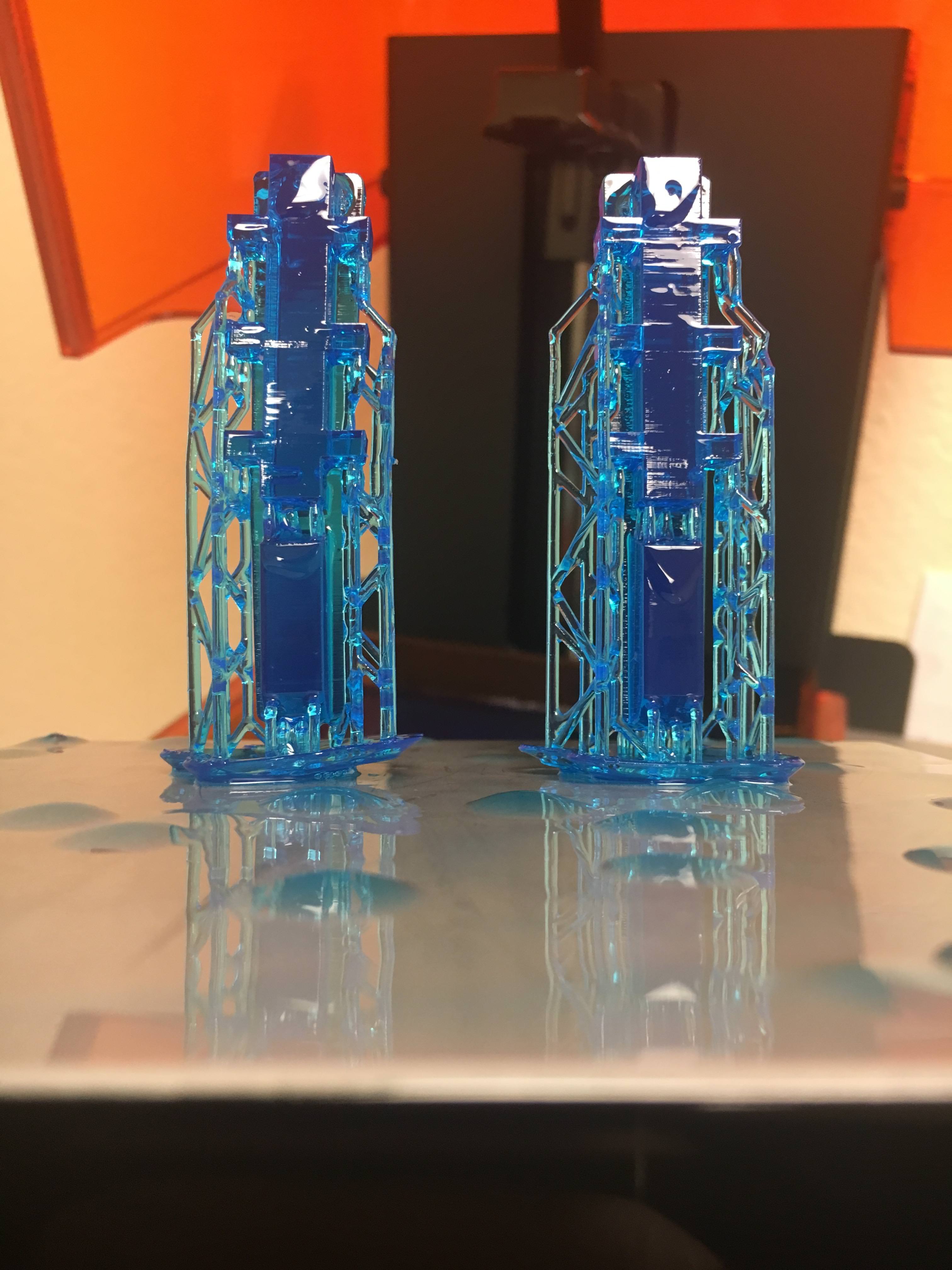 Also here is a picture of the tank. It’s got more clouding at the rear, but seems to do this same behavior everywhere on the bed. My other tanks that worked fine until this issue started popping up saw at least this much use, probably twice as much if I had to guess. 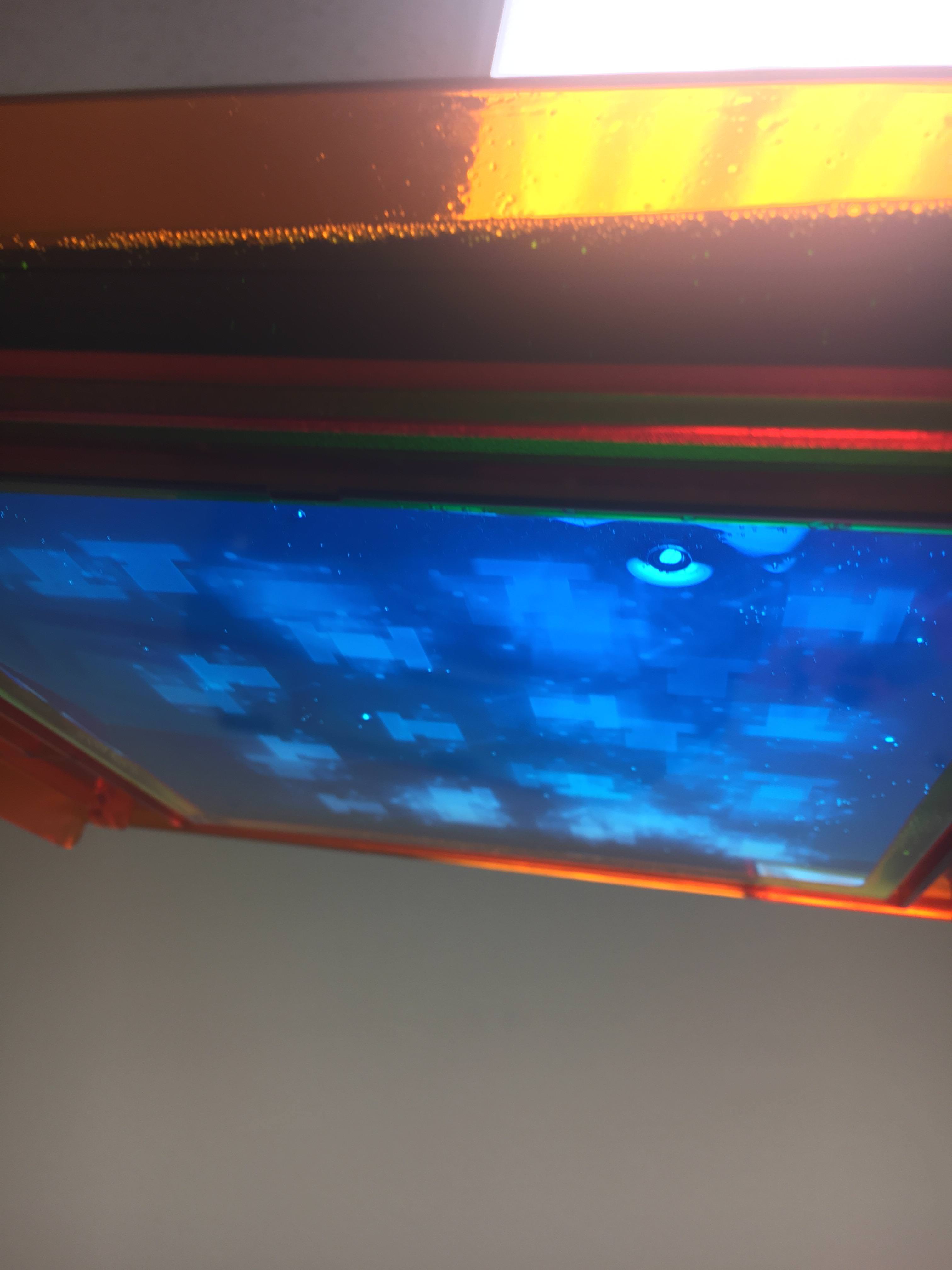 Concerning tank: Because your orientation of the parts is the worst you can do for the PDMS layer. You only wear out the same cross section over and over again, that’s why it clouds so badly. Just give an angle of around 45° to the parts and you will see way less wear. Also the adhesion to the platform will improve a lot.

I do agree that angling them would probably be better, but I have printed probably 500 of these pieces with no issues until they suddenly started occurring.

I put in a new tank of durable material with a brand new bed and just had the exact same result. Really frustrated.

I’m having the same problem with the tough resin. The last prints were so difficult to remove from the bed and now even after the first layer it keeps falling off.

I could see a bit of hazing of the optical window in the machine but I pulled it out and HOLY COW. That thing was gross looking, tons of haze everywhere and a speckled type appearance. This pic doesn’t do it justice but here’s a new one on right vs left one. 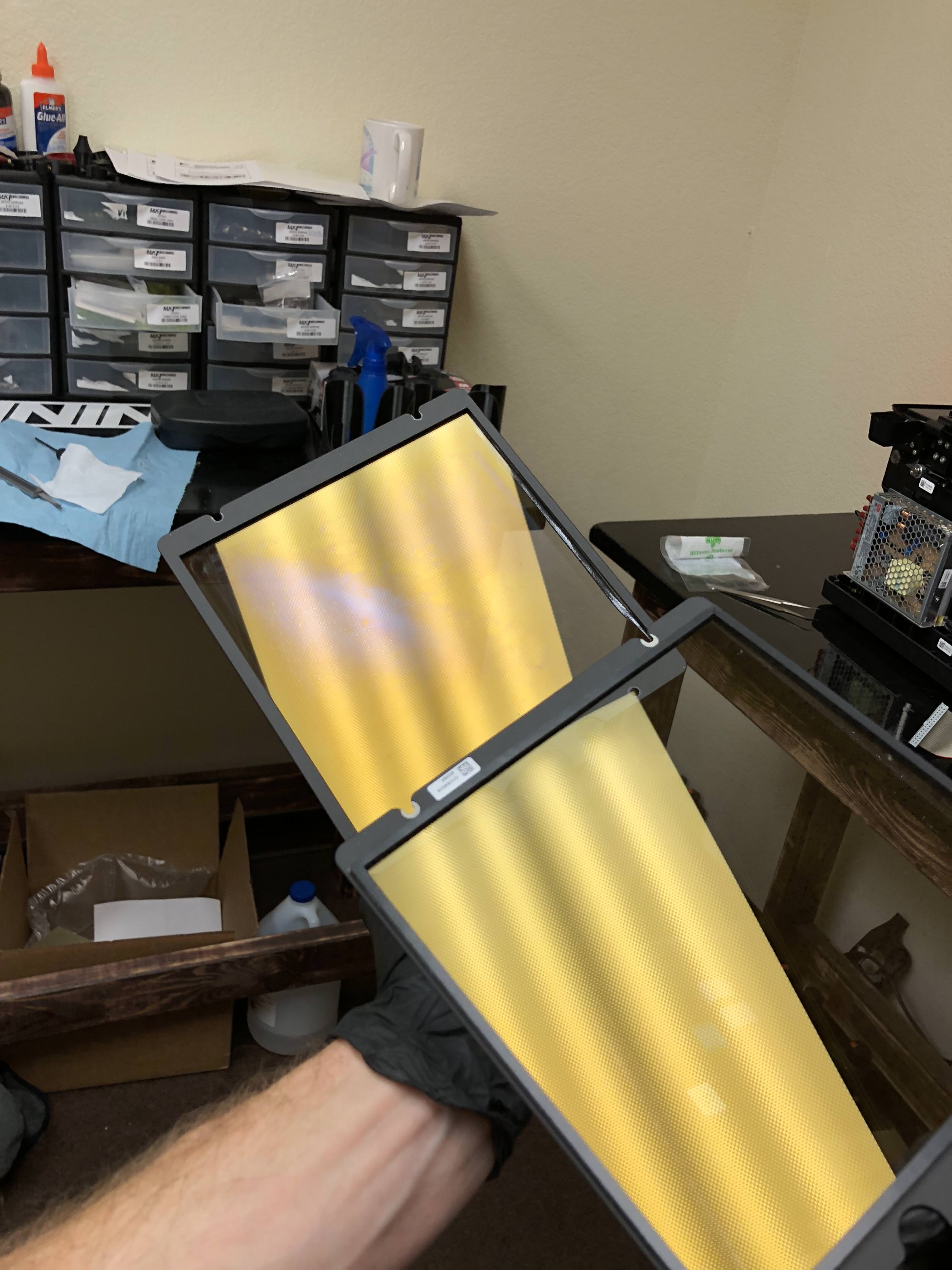 is the laser damaging the glass window?

I didn’t even think this was a possibility.

I’m not sure. I cleaned galvo mirrors, main mirror, changed optical window, and now things are printing great once again. I’ve made more stuff in the past few days that I had in over a month combined I bet.

Hi mkmaching,
You are using a form2, correct?
If so, how did you change the mirrors? Do you have a manual or guideline or such?
I’m having similar problems but with a 3rd party resin (Blue Cast).
Strange thing is that it never happened for 1 year and now all of a sudden parts are falling off or not printed at all.
Regards from Belgium