Layer 1 not sticking to build platform

Is it time to think about replacing the build platform? it has been in use since spring 2017, gone through at least 10 litres of resin. Tray is new. 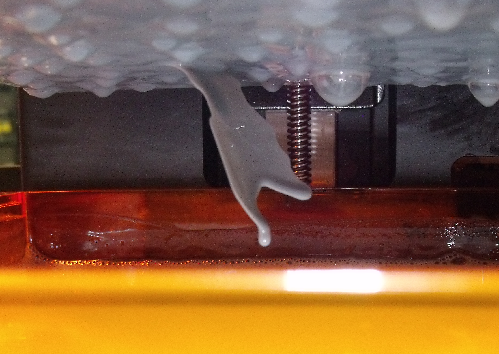 BTW - Sanding the build plate did not help.

Try polishing it till something like 2400 grit. If it still doesn’t stick, lower the z-axis.

OK, I’m confused. Some say 180 grit or wire brush. You say 2400 grit. Is the objective to rough up the plate or make it smoother?

New platforms don’t look like 180 grit. I’ve had much better luck with a slight polish than rough surface. My platform is still the original one from 2016 and doesn’t have any adhesion issues.

You are printing open mode with ALW resin, right? It can help heating the resin before starting the print.

No, printing in “closed” mode with DF resin.

If the printer setup works with a Formlabs resin then it suggests that the profile you are using in Preform for the DF resin is an incorrect profile, have DF changed the resin to a slightly different formulation or version?

had same issue before. have you touched the calibration screws ?

to make it sticky or loose on platform you have to adjust the heights of the platform. that can be done in setup.
play with it, that cant hurt. as i remember when you add numbers (moving up the platform) you making the first layer bond stronger to the platform. opposite happens when you moving down the platform.

also it could be your carrier tray is dirty or overused

I tried setting the Z axis down -.1, same result. The long raft sticks to the plate near the edges but comes loose near the middle. I printed a job on July 3 with 2 even longer rafts and all was good. Two days later. same tray same resin, haven’t touched any calibration screws and I can’t get it to stick. The only thing I can think think of that has changed is room temperature, having a heat wave here that started at the same time as this problem. Here is the object I’m trying to print. 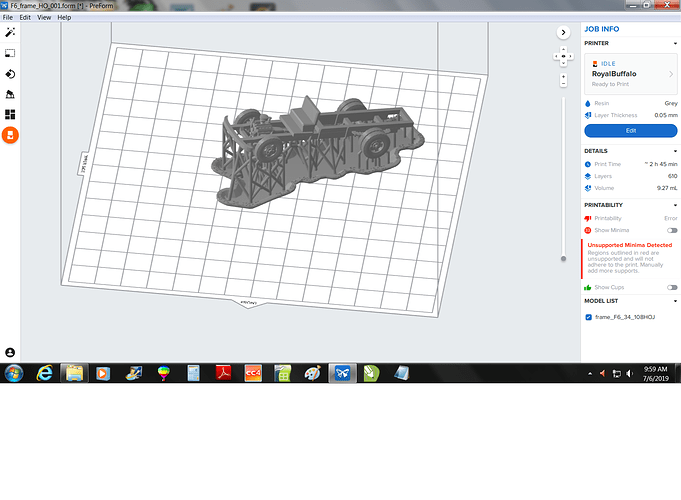 Then I tried this job which has 4 small rafts in the corners and it was OK. 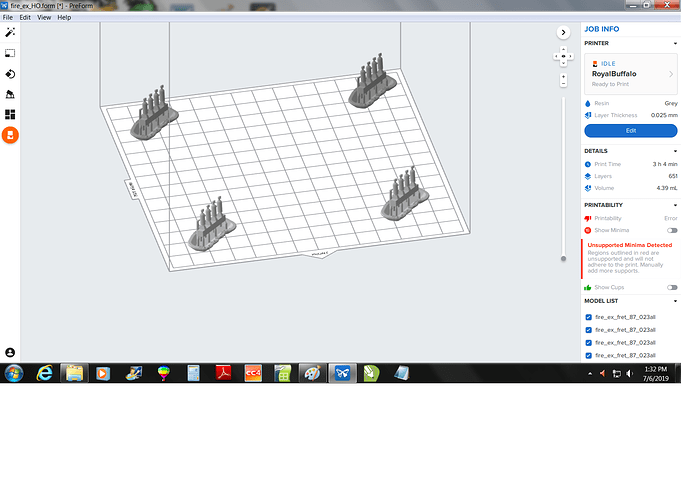 Are you printing with the DF resin for this? If so it sounds like the adhesion to the build plate has reduced. The small parts will not require much adhesion to work well, but the larger print has quite a lot of surface area and as such adhesion issues will be noticeable.

Some questions / points for you:

1: What does the pdms layer look like when you look through it? Often its more clouded in the middle, where most people tend to locate prints. The clouding limits the amount of UV energy getting through for the cure. That will reduce the adhesion

2: Has anything changed with the resin?

4: Have you done the Formlabs optics print test to check the optics? Dust / dirt on the mirrors can have a very adverse affect on adhesion in different areas of the build plate.

If you don’t have the test file, this thread has a link to it (in Fantasy2 post) Clear Resin - Print failure

As I said in my first post, this is a brand new tray, I had only used it for 2 jobs before this problem started. I only use DF resin, been using it for months, I have no other resin in stock that I can try. I cleaned the optical window at the same time I replaced the tray and the first 2 prints were good, both with rafts larger than the one in the screen shot. Then the printer sat powered down for a couple of days. Nothing was changed, just powered it up again and the problems started.

The larger raft helps adhesion to the build plate, the key is what area of the print is in contact with the PDMS, whilst I hear what you are saying, its still worth checking the PDMS for clouding. Its also worth putting a metal rule across the build plate and checking it for flatness, I have seen them buckled in the centre - that can increase the distance locally (on the build plate) from the PDMS to the build plate for the first layers.

The fact that you are on here seeking an answer because you have issues getting a good print in the centre of the build area says that somethings changed, it could simply be a number of things that have changed slowly over time, each one on their own not too significant, but together cause a problem in combination once they have changed to a certain degree.

The other answer is for you to seek Formlabs help…

I checked the build plate with a metal rule and it looks perfectly flat. The PDMS layer looks OK from the bottom, but I’m waiting for a shipment of paint filters to arrive so I can clean out the tank and get a closer look.
I was able to print the part simply by aligning the raft along the front edge of the build platform.