Can you include paint filters in your Forms 2 package?

Paint filter is a must for use of Form 2. It think it should be included in package. In Europe here, it is so hard to find it. There are nothing in the shops around me, so i ordered online, but they sell in set of 100. So, i have a big box to last me for eternity.
I need paint filter for cleaning resin in the tank after failure when printing. (print tear up during peeling etc)
I need paint filter to clean the particles inside iso propyl in the Pre and Post-Rinse Tubs. (After using black resins, small particle of black fall on my clear resins print)

Any paint factors should stock them. EBay too for small numbers (5s, 10s).

FWIW, I’ve gone through 5 or so per print failure - they clog so quickly with the fine particles of part-cured resin that it’s more time-effective to switch to a new filter. I also strain out my rinse tanks periodically too using the same filters, but I haven’t had the same issue with contamination as you have.

Point well made! Not all of us have spouses to keep us in a steady supply of torn pantyhose (an excellent resin filter BTW, draped over a plastic cup and secured with an elastic band around the edge). I mean, I have such a source, but surely you’re not all as lucky as I.

pantyhose? won’t that introduce microscopic nylon particles? Is the hole in pantyhose too big to filter small particles? Kind of think of it, the hardware store, who does not sell the paint filter , told me about pantyhose.

I would have to agree, I have used at least a dozen paint filters (fine mesh) since owning my Form 2. They are a must have to save your contaminated resin after a failure and dirt cheap!

i have sad news, i tried to clean my tubs of alcohol with paint filter, it is a failure. I still see a lot of black spots when i soak my clear print item. I cannot see them in the alcohol, but i see them on my clear print. The print is sticky and it goes into the gap between layers , it is tiny , i cannot remove them. I need to buy new isopropyl . I will not use black resin any longer. NO NO NO,

What is the law for disposing about 7 litre of iso propyl ?

The law varies by municipality. I am in the greater Los Angeles area and I know it is illegal to dump IPA. Our warehouse already has a hazardous waste recycling company that comes by on a monthly basis to get Acetone and other materials, so we just add the used IPA to the list.

Other people have come up with various ways of reclaiming the IPA. A few methods work (kinda) and some don’t. I have also gone from black to clear or white with unfavorable results. I know some people have multiple vats for certain colors as well. Just depends on how far you want to go!

I also use paint filter for resin, it work very well. On alcohol, totally useless. It is time to buy new alcohol.

I don’t know a way to reclaim to ipa . but disposing it you could just let it evaporate and you’d have less to dispose of

http://www.harborfreight.com/catalogsearch/result?q=paint+strainer
they don’t ship these for some reason but cheap enough 100 for 4.99$

https://www.grainger.com/product/DEROYAL-Cone-Paint-Strainer-WP105066/_/N-j6x/Ntt-Paint+Strainers?EndecaKeyword=Paint+Strainers&NLSCM=5&nls_boost_words=noContent&searchRedirect=Paint+Strainers&sst=All&s_pp=false&picUrl=//static.grainger.com/rp/s/is/image/Grainger/41U066_AS01?$smthumb$
the key is search for paint strainer not paint fitler

For IPA filtering won’t necessarily do much, since it dissolves the resin. But, to help a bit, I filter it through some paper towels and it does remove some stuff.

Take your IPA wash tub and put it in the sun for an hour (lid loose or it’ll pop). if you let the IPA sit overnight, you’ll find all the resin that was mixed in to the IPA settled out on the bottom of the tub in a fine “powder”. Filter the IPA through a paper conical coffee filter. Viola! Clean IPA. 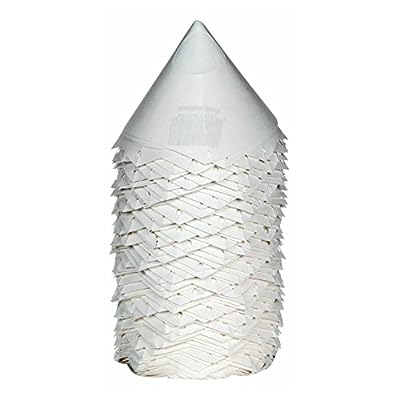 Those are the filters I have been using. I went to my local paint store a few months ago and bought a couple dozen for a few dollars. I believe they are 190 although I am not 100% certain. They are labeled Trimaco V#4394 Fine Mesh.

I need to order some more…if anyone has any suggestions.

As far as Trimaco filters are concerned:

So confirmed that I am using 190 microns and had good results.

paid wayyy tooo much. 100 for 7 bucks harbor freight. they just wont ship them

I didn’t buy them from the Amazon link…I was just linking to show which ones I have. Like I said I bought a dozen or so from a local paint store for a couple bucks, and reordered from Grainger. I think I paid $12 for 100…but i can’t be certain.