What damages can I expect from using OpenFL with very low laser light and slower galvo movements on the F1+? Thank you for your thoughts

I don’t believe slow will hurt anything. FL limits the max glavo and laser settings but has never said anything about going slow.

I really hope so. I’m getting good results with the monocure resin (white). The resin has very high photo initiators (i’m just guessing) that is so sensitive it always over cures with the standard form 1+ material profiles. I tried lowering the dose using OpenFL and experimented for a few days. I have to go super low to get to this result. 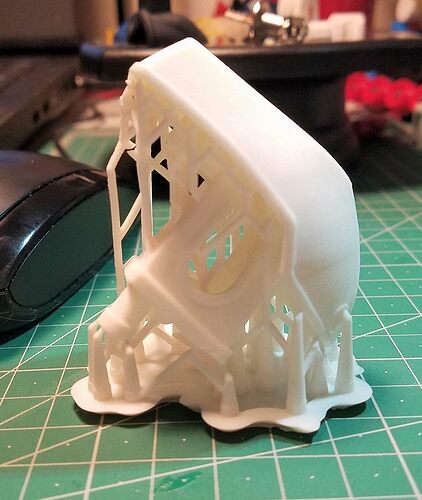 How low are your settings? Just curious. I wonder if you will notice a longer PDMS layer lifespan.

I’m still looking for the sweet spot. But I’m happy with what I have so far.

Wow, you weren’t kidding. Fl resin numbers aren’t anywhere near that low (from what I have learned)

Yeah, in contrast, The formlabs clear v2 requires 62mW based on the provided ini file from OpenFL.
Took me a lot of trial and error to get this low. Never really thought it would work. This is for the monocure white. Believe it or not I’m still having minor over curing on the clear resin with these settings. I will be testing the black resin tonight. See if i can get the same result. I’m expecting a little higher setting but still low by any formlabs resin standards.

I’m really hoping that these low settings would have positive effects like longer PDMS and Laser Diode Lifespan. If not, I’d be satisfied with not breaking anything in the process

You will definitely not break the printer by moving the laser slowly or at low powers. Some things to keep in mind:

Another thought for your consideration, reducing the speed has the opposite effect of dropping power.

edit: You can also print that Benchy on the build platform like you would an FDM (might save you some time + resin). As a general rule of thumb, if it self-supports on an FDM, it will self support on a Form1+/2.

Hi Dmegret, thank you for your response. I did went a little overboard with the supports. I set it up to print that way to see how far I can go with the current low settings. (i was observing the supports more than the actual 3D-part since over curing is more evident in the support structures). I did consider the power to speed ratio as described in the OpenFL documentation and thank you for explaining it better than the documentation.

For best quality it helps to keep the exposure amount as low as possible, but doing that you also risk making the layer weak which can come apart during layer separation or cause the print to fail.

I am using a Form 1 in open mode and was thinking of trying the Monocure resin as even with shipping from Australia the price is still cheaper than the Funtodo F1+ I have been using.
The Funtodo does warp quite badly with long thin parts, have you printed anything similar with the Monocure?

I made a spreadsheet a while back that allows you to create a profile based on the cure power you need. I’ll see if I can dig it up.

It also allows you to create new thickness settings based on curve fits.

I found that spreadsheet, didn’t realise it was you who had posted it.

I had got close to the correct settings by trial and error, first with Makerjuice SF the then the Funtodo. The Funtodo prints well at 0.1mm and actually seems better at 0.05mm and 0.025mm, but I do get the warping. I guess it’s mostly unavoidable as the base wants to shrink but can’t as it is stuck to the build platform. If you space the parts about 10-15mm from the build platform it does help, but the Funtodo is quite soft so the thin supports are very bendy.
Have you seen much shrinking/warping with the Monocure, and is it the standard or rapid?

The spreadsheet was actually interesting to make. Combining several cells into one for the copy paste sheet was interesting. Look at the formula and say it 10 times fast.

HI,
I am currently trying to print on the Form 1 using Monocure standard white.
I am unable to get the right setting with openFL.
its either printing gibberish, or nothing at all.
Can someone please help me with the exact laser power setting and speeds. (A whole range is hard for me to test) as resin isn’t a very easy find for me.
Thanks in Advance

If you are getting rubbish or nothing at all the power setting is way too low, post the text of the file you are using.

These are my current settings.
I have increased them slightly but started of with what was given in this thread at the start by Ken.

Your power settings look about half what they should be, if you bought the standard resin it should be pretty close with the stock Grey FLGPGR02 - I think Ken possibly bought the rapid which needs about half the power.

Have you run a small model test with a base support on the Grey FLGPGR02 setting at 0.1mm?

Try to calibrate your printer first. Print using the standard formlabs settings. If there were no changes in the monocure formula then you should get an overcured part but definitely not gibberish.

If so, then the problem could be your printer so adjustments should be made there first.