I’ve noticed lately that some support bases are about 1/2 or less the thickness that they should normally be. This has caused some failures with one printing shearing everything off including the supports which where plenty thick.

I’ve looked around and can’t find any setting for the support base thickness. Anyone have input on this?

It sounds like the the support base is compressed and the Z axis on the printer needs to be razed. I would start with a .1mm increase in clearance to see if that helps and test it with a small model 1st so you dont make a mess and waste a lot of resin.

Sounds possible except it seems to vary and it’s happened on both Form2 machines. That’s what really stumped me. I was using the standard orange resin trays. I’ve now switched mainly to the LT trays but still see a bit of it.
Problem for me right now is production. We have close to 200 orders in that need multiple prints done. Only running 2 weeks behind right now.

Here is a photo of what I’ve been experiencing.
The two support bases to the left are from the newest Form 2 I have.
The two Support bases to the right are from an older unit. Both seem to be having issues which I find questionable.
I’m using Preform V. 2.19.3 and have been for almost a year with no issues before now. Neither of the printers has had firmware updates either. 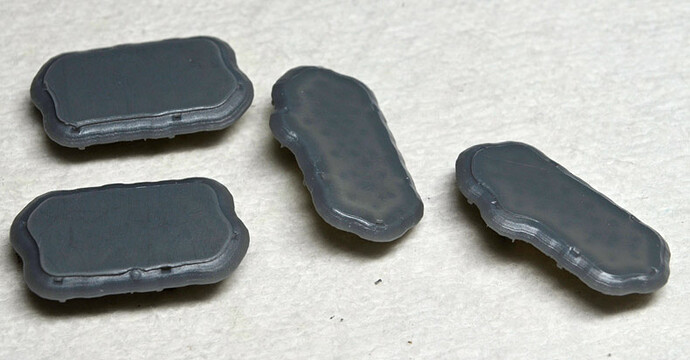 I upgraded PreForm to the newest version and also, of course, updated the Firmware in each of the Form 2 units. Ran a print job on each and what a MESS. Lost almost 75% of parts on the build. They were either totally on the resin tray base of broken off just at the support base.

I then immediately reinstalled the older version of PreForm and the rolled back the Firmware. Printed a job on each machine and they turned out perfect in comparison. No lost parts.

I’ve had this issue before with PreForm. Sort of like they don’t test it thoroughly… The last time it shrank the parts slightly. Reported it and FL found I was correct and fixed that version…