Lately, it seems like the base-plates my Gray prints are very brittle, even a light pry from the removal tool just shatters the base instead of lifting it up. Is there something I can do to make my parts pop-off again? (ie sand the base? thicken the base itself?)

I’m having the same issue and I use ALW resin. Sometimes they just shatter.

Having this issue too. It seems it’s over-curing and sticking to the build-plate like it’s welded on. Doesn’t happen every time though, its a bit random.

I look towards Preform as it adjusts the power of the laser. Could be hitting it too hard just during the build of the support plate. That happened in the past and the support plates were all but welded to the build plate. I had to use a hammer and chisel to get them off.

I believe many people are adjusting the z-offset so that the raft is sell compressed to the build platform. this may be the route you need to go down. there’s plenty of threads on here take a look.

The raft is stuck to the build plate, that’s not the issue. Only one row or so breaks off after layer 2 or 3. The first layers are there so the Z axis isn’t the issue I feel. FL didn’t think it was either. They feel I need to clean the glass and the main mirror.

Yeah I feel like my gray builds went to hell after one of the more recent firmware updates. My builds using tough resin are perfectly fine, its just gray that seems to have this disintegrating raft issue.

What do you guys have for your “base thickness” setting right now? Mine is at 2mm, which I think is default… perhaps thickening it to 3mm or 4mm would help?

Contacted ALW on this and they assured me that my current resin is the same and from the same batch. So it’s not the resin that’s the issue. The firmware and Preform have not changed in the last month so it’s not that either. Only leaves a dirty mirror and underside of the glass. I’ll attach that next week maybe when I have some time.

I run with everything set on what the machines came with. I don’t mess with these settings as for the most part both machines run well.

Ditto with coloured resin. This resin is incredibly brittle at best, but now it’s really hard work to remove from the build plate without breaking the part,

Hi Ben
Cant speak for the others but Im running the latest Preform [2.18.0]

All settings default as far as I know,
This is what I see

I’m having this same issue on my printer. Print in the latest Tough and Black resin versions and running Preform 2.19.1. It doesn’t happen all the time which is frustrating, as when it does happen it wastes a lot of time having to pry welded rafts off, and then having to sand the build platform because of stuck resin and/or huge gouges in the aluminum when chiseling raft pieces off.

Did you guys ever figure out what the issue was? I can’t believe it would be dust on the glass/mirrors. I would imagine that would affect the laser power and do the opposite (cure less rather than cure more and weld it on and become brittle).

This has happened with both my resin types and not entirely sure if it’s location dependent on the build platform.

Just uploading an image here to show how brittle the rafts were. I had to use a lot of force and a very sharp flat tip xacto knife to chip these bits away. 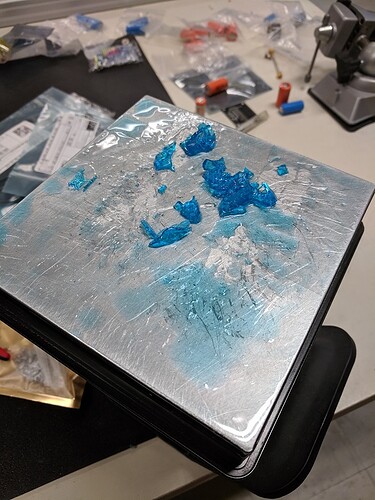 Oddly enough, my tough resin has been pretty solid but my gray falls apart at the slightest pressure. what is your raft thickness set to?

i find that the adhesion problem gets worse with subsequent builds.
This points to the fact that microscopic trace amounts of resin are getting stuck in the scratches on the build platform with more being left behind with each build.
As this resin remainder builds up, the laser reburns the trace resin, hardening it and bonding it to the new raft being laid down.
Some resins have more of a problem with this than others- but I find grey, rigid, and tough all rapidly become harder to pry off with repeated builds.

What has been working for me is an orbital sander with 120 wt paper on it. The moment I have the slightest trouble getting a part off the platform, I clean the thing and sand it down and clean it again.

this usually results in the next build’s parts popping loose like in day of yore.

One of these days I am gonna buy a new platform- just to see if the adhesion with a new BP is like when the machine was new.
If so- then its definitely related to wear on the platform resulting in increasing mechanical bonds.

@AZideaworks my raft thickness is just set to the standard…so 2mm.

@Sculptingman that’s really interesting and I think that makes sense. I also usually sand the build plate after a print with brittle rafts and I recall that subsequent prints are better afterwards. And then it happens again after several prints. This would also explain why it doesn’t happen all across the build plate if it’s trace amounts from previous parts in select areas. I’ll keep an eye on this and possible lightly sand the build plate in between each print. Thanks for the insight!

So I just finished a print - this time the parts popped off wonderfully and it was the first print done since sanding the build plate from the last brittle raft encounter. So I do believe what @Sculptingman says is accurate, as this matches what I’ve seen. Am doing a light sanding after each print now and will see how that holds up.