I’m curious if anyone has worked much with reducing the support structure. Specifically with Tough 2000 in a 3L, but really anyone who has tried to find the happy medium.

I’ve found FL is way too conservative. I didn’t mind so much with prints on the 3, but with the 3L, I’m using as much resin for support as for the actual model.

So far, I’ve reduced the density to 60, but haven’t seen much reduction in resin use. I’m about to try 50% and reducing the touch size as well, since with the current print it’s taking hours to remove the structure.

I’m not sure looking at the piece will help, since I’m after general information.

Any thoughts? Thanks in advance

Yes, I have observed the same problem you are describing with Tough 2000 on my 3L. The supports are too many and too close to the parts.
I was hoping a corrective update of Preform. Sometime I put manually the supports…

Yeah unfortunately I have to deal with this too.

So much so, to the point where I sometimes will just place supports manually entirely.

I usually do 80% density on the form 3 and then remove supports here and there. On the 3L since parts are so big, I have to do the same thing but it’s a lot more work because parts are large.

Sometimes it can take 30-60 minutes for me to find the right orientation and manually edit supports such that I minimize them for cleanup. It’s somewhat annoying but saves a lot of hassle afterwards.

Sometimes it can take 30-60 minutes for me to find the right orientation and manually edit supports such that I minimize them for cleanup. It’s somewhat annoying but saves a lot of hassle afterwards.

I do the same. It takes a lot of time… More than just doing auto supports, but necessary.
It’s like a small part on the Form 3L is over supported like if it was a tall part.
This is really annoying and I hope they will ameliorate this soon.

I can’t remember the last time I used PreForm defaults for a print. I always start with 80% density and .5 contact point size. If PreForm complains that the model isn’t fully supported, I go in and add a few more support contact points by hand. I’ve never had a print fail because of these choices. And the prints are substantially easier to remove from the supports.

Now, I don’t have a 3L, so I can’t say if this translates well to very large/heavy prints. But I’m thinking the issue is “force per unit area” so if a print gets bigger the same density of supports implicitly means more supports to keep that force/area value the same. So I’m thinking it ought to scale.

I’ve used 55% density and .7 contact support on a model weighing over 3lbs. I find removing the “Full Raft” and using the “mini-raft” option makes removal so much easier. I went from spending +30 minutes to remove a 10" gear, to less than 2 minutes. It really changed the game for me, also using a LOT less resin.

Way off topic but…

It took me about 1 minute to remove this print using my Milwaukee 6" Insulation Knife (Home Depot). Start at any edge, work blade under the print (it’s a very thin/stiff blade), then twist the blade a bit and work the blade deeper. I get about 1/2 to 2/3rds through the base and it usually pops off (have actually ruined a print by having it go flying off and hitting the floor). The mini bases are easier to remove, I do agree, and the bases uses less resin, but I find that some prints tend to warp in post cure if removed from the supports, or if I use mini bases. The entire print needs to be constrained to a common base to prevent warps. 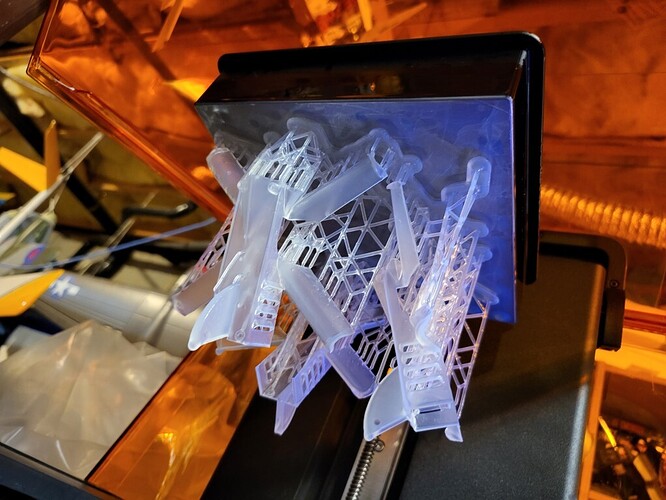 i just ran a print with the settings: density .85, point size 45 slope 50, which worked just fine, despite being a considerable reduction. I hadn’t known until support just told me, that the support density on steep angles doesn’t change unless you also reduce “slope” in advanced settings.

Aside from being far easier to remove, i saved over 250 ml. of resin.

I’m going to try lowering it even further.

The previous prints, at higher densities, 1.00 and above resulted in fused support lattices, where the structure became monolithic; solid.

i don’t know if this is a recent bug.

Has anyone else seen this?

I always start with 0.7 density and 0.4 touch point size.
Depending on the part I may add a bit of manual supports and, if the shape allows me, I add larger touch point supports in specific areas of the part (those that won’t be visible, for example).

Smaller parts usually go as 0.35 touch point size and work fine for me.

It’s all about physics vs the overall part finish you’re trying to achieve.

The default settings are very conservative so that you can get a proper working part every time but way too exaggerated in my opinion.

Interesting, I didn’t know that you had to reduce slope as well. I do notice that sometimes changing from 100% to 50% density doesn’t do as much as I would imagine.

Here is a test comparison. The first is at 100% density. The second is 50% density. The third is 50% density and 50% slope multiplier. It looks like the latter is no different at all from the second. The part was only at a 45 degree angle though so maybe it needs to be steeper for that to have an effect?

I also don’t get why reducing density from 100% to 50% haphazardly deletes supports in some areas but leaves large clusters elsewhere. You would imagine that reducing density would simply space the support points more evenly apart.

This is a huge annoyance to me when working with 3L parts because I have to go in and manually edit so much. I’ve also complained about insufficient manual editing tools for 3L parts that really hinder productivity (eg. would be great to have a paint on supports tool, paint on keep-out tool, or lasso tool, etc.) 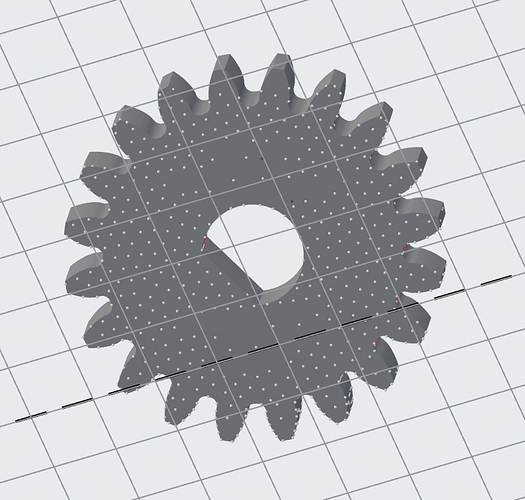 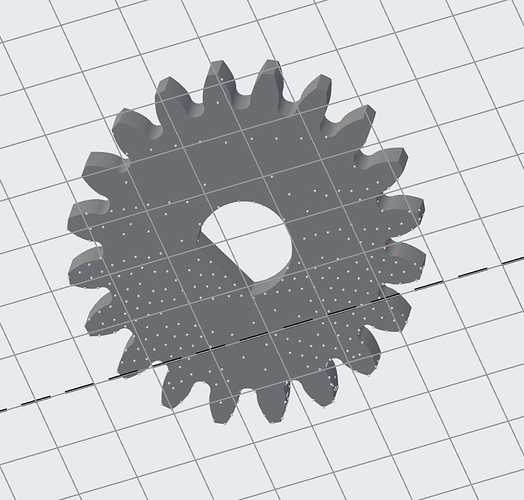 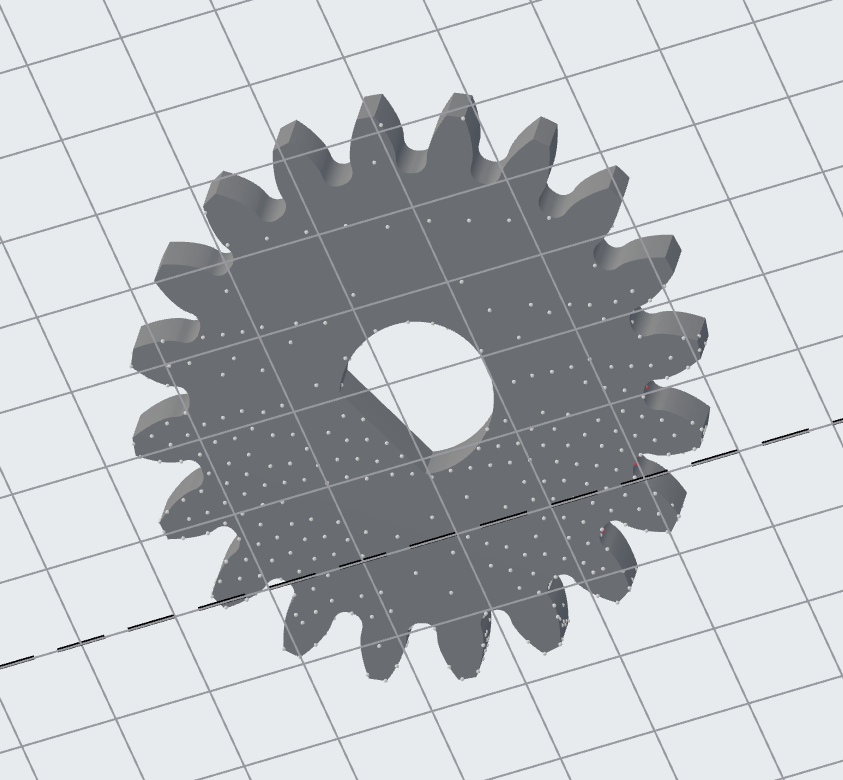 Note that if you reduce the support density too far, the model won’t be fully supported and you will have to add supports manually (or increase density).

It’d be nice if there was a switch to tell PreForm to support the model with the minimum number of supports required to achieve printability so I wouldn’t have to guess if 80% is enough or not.

Can you include the resin use in each part? I’m curious about the % reduction.

My model is a bird with thin wings and legs that uses the full print volume, The wings are at. 45° angle, and get a dense cluster of supports with all settings. Based on the latest print, I can reduce further.

The prints take almost 2 days, so testing is slow.

Support tries to be helpful, but they don’t have hands-on experience with the issue, and are way too conservative. First suggestion was to increase the density to 1.30 to compensate for tiny touch points, which made matters much worse. The supports fused into a solid mass.

We’re really on our own.

I think those screenshots were in Castable Wax on the 3L just because I happened to choose that…maybe it’s different on other resins.

It’s definitely frustrating at times. I literally do support placement almost entirely manually these days and it feels like such a waste of time.

On the plus side, all my prints on my 3L have been working flawlessly so at least there’s that!