Usually the prints are pretty impressive, but there some instances when it fails to deliver.

Take for example the attached images. The planar face on which the buildings are placed has some streaks on it.

My first guess was that there is something wrong with the STL, but I’m not so sure as the streaks are not covering the entire surface. You can see that there are some clean areas as well.

Anybody else encountered this behavior and if so, is there a fix for this?

It seems that there is an issue with the upload feature on the forum, so here is a link to some pictures together with the STL and FORM files. On the same job I printed an engine and this had no issues. 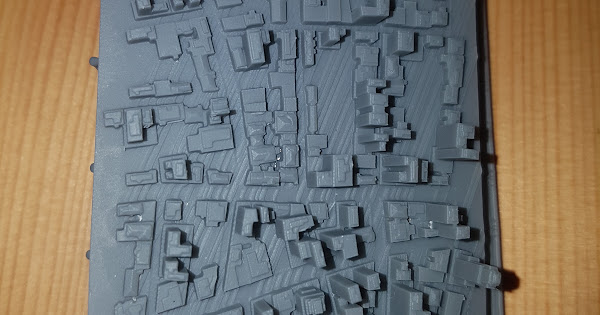 I have run into this before - the thing to first check and the most common source of this is co-planar planes and features in the STL. By which I mean that there are one or more planes in the model that share the same plane.
Something about the math goes wonky with Preform/Form/whatever when it runs into these.

The sample on the right will correct this issue.

Also, a saving your STL with the “binary” option selected will also fix this, I believe.

Thanks a lot for the co-planar hint.

When I design my own objects I always intersect them a little before merging them with a Boolean function in whatever software I might use at that time.

This STL is from Thingiverse so I have no control over it. It was just a test print.

Have a great day!

A great tip is to use Netfabb’s repair scripts to automatically fix your models. It detects most errors and fixes them quite easily. I have been using it since… forever and in most cases, it saves me from doing any manual fixing.

I personally use Materialise Magics 22 to merge and unify parts. In the past I have also used Netfabb. Netfabb software tends to be a bit sluggish compared to Materialise. Netfabb tends to decimate and add more artifacts with each step of repair.

There’s also MeshLab, which has the virtue of being free. It runs on Windows, Mac and Linux and can do quite a few sophisticated repairs/mutations on meshes, though the user interface is less than intuitive.

Preform already uses Netfabb’s core to repair the models, as far as i can remember.
It usually does a better job than Netfabb (Premium), especially with regards to self-intersections.

If it’s coming out of Preform badly, Netfabb likely won’t do much (additional) good - in my experience, your last bet is either Materialise Magics, or remeshing in Zbrush (if it’s an organic model). Or, of course, fixing manually, if that’s an option.

You don’t need to merge/boolean parts, as long as they’re intersecting a little bit it will be treated as one solid object in Preform.

We’ve occasionally had similar problems as this. I doubt this is a problem w/your STL file(s). Try to observe how the striations lay, with respect to the surface of the build platform. When the resin tank slides sideways between the layers, the mechanical forces can flex the part side-to-side slightly, until the layer breaks it’s adhesion to the tank. If the next layer starts burning in before the part naturally relaxes back to it’s true position, the next layer will print slightly offset from the previous layer(s). If the striations you’re seeing are parallel to the platen surface (aka planar in the Z axis), this may be the case. The part could then benefit from more robust supports, or rotating the part to better self support itself during the tank slide motions.