Print defect, orientation or other issue?

I threw together this test print to try out a few things and the result was overall good. The odd part is what looks like a trail off the text tests. It is literally a line standing out off the text only on one side. If it were all the way across, I’d say maybe orientation or something. Any thoughts?

Details: 50 micron, grey V3 on a Form 2 and nearing the end of the first liter ever printed on it. 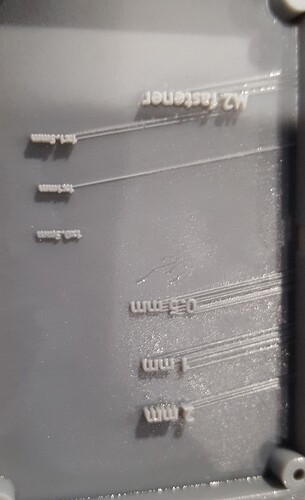 This is likely a problem with your STL files. There are already a few topics around this issue. It’s due to the way the STL is generated or the program that you use to design the part.

Rotate the model 90° and print it again. Did the streaks rotate with the model, or did they maintain the same direction?

If they rotated with the model, they are either an artifact of an STL error, or an artifact of the slice, possible a laser trace that should have had the laser turned off, but did not.

If the streak keeps that direction, then it’s a problem with with some light reflection or refraction due to some imperfection in the glass.

I assume this model was printed flat, and not at an angle. If you were to orient it at an angle (of the vertical), would the streaks still be there?

Ah thanks so much. Just like the user in the thread, I too am using Sketchup and it appears it was an issue with my text being a component.

Thanks. I apologize that I missed that already being covered. I try to follow the forums each week since I purchased my Form 2.

you just need to make sure that the bottom faces of the text are not coplanar with the main surface, so just extend it a little bit further so that it is intersecting the main mesh rather than directly on top of it.