I am printing in Gray V3, while I am new to Form 2, not new to printing and modeling. On my recent prints I have noticed that there were lines on the printed model, not everywhere, but they appear when a object is on the surface of the model. I have scraped them away (kinda) on the first time, and on the second time I used a q-tip and IPA to scrub them down at the end of the wash cycle. I can’t predict where or when they will appear. Otherwise the prints are very successful. 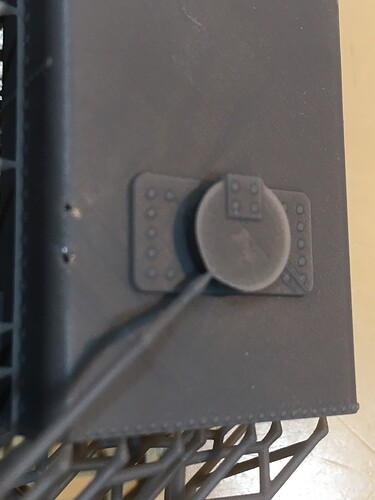 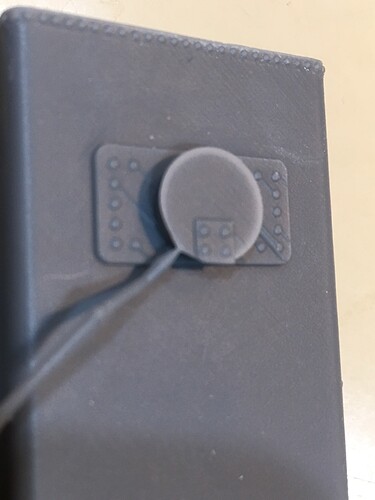 Note the streaks that appear after the rivet detail, they were on the larger tank body too, after a designed seam line, but only on one side. I used the auto align and support tab.

What’s the STL like? Is it a single shell, or are their separate shells for the different parts?

Those look like the patterns you get if you have separate shells which are just barely touching. When you have two shells which exactly touch on a plane, PreForm has trouble resolving that plane. Because of numerical roundoff, some of the fill scans will end up missing some of the shells, while others will hit all of them.

If this is what’s happening here, the best thing to do is to union all of the shells together in your modeling program.

If you can’t do that, then the next best thing is to extend one shell into the other so that there is a bit of overlap (about the width of one layer perhaps). PreForm can figure that case out. It just has trouble when the planes are almost identical.

The model is 1 piece and it’s hollow. I have test printed it with PLA, for sizing/scale. I then added the rivet and seam detail. Yes it could be make in multiple parts I guess, splitting the tank horizontally along the seam and adding the details on the top separately. Frankly the model is super, its just this effect of lines that need to be cleaned up 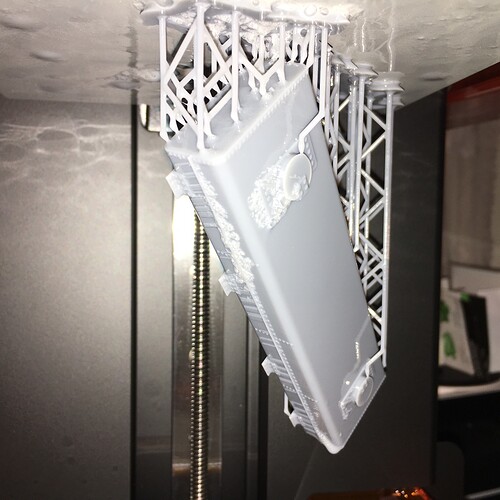 No I wasn’t asking whether the object was one piece. I was asking about the internal structure of the STL file. When you added the details, did you do a “boolean union” to combine everything into a single shell, or does the STL file contain multiple shells which combine to form the one object?

You can get better results if you orient the object yourself and place the supports yourself. From what I can tell, it looks like that’s the top of the object and the other side probably doesn’t have much detail, it would help if you angled the piece more so that the top part is angled upwards more.
Ideal orientation starts at a corner so that it builds up from a small point to the rest of the model. When placing supports, place them first at points that are unsupported and then add supports to other areas to add stability.

Oh sorry, no it was a 1 shape extrude from end to end, the seam is artificial, as well as the other parts. The only other think I did was use a shape (rectangle) on the bottom to push thru and open it up.

You are right, the top and sides are the only parts that matter the underside with the hole is there for adding weight as needed.

That streaking looks an awful lot like what I was running into when I had parts of my Sketchup model done as Components. If the components are not made to extend into the main watertight body enough, then its the issue that Mgarrity was talking about, I’ve found it listed in other places as Coplanar Surfaces. They also didn’t happen with regularity, but were random with each print. The netfabb repairs seem to make it watertight, and it passes, but then the lines show up.

I fixed it by exploding my bigger, more complicated components and making them part of the manifold, and making sure all of my rivets were “stuck”, with the backside of the rivet component open, and showing a hole in the main part. I hope that makes sense.

Corey,
Thanks I understand that…yeah in those areas…the seam line for example is built upon the surface, no part of it entends into the other shape. In the case of the tank openings and rivets, those indeed pierce, but there maybe a coplanar issue with the rivet head and the surface. Thanks all for you comments, before I finalize another for printing I will check this out. Do you think the angle of the print makes a difference?

I had the streaking happen on multiple prints of different parts at different angles, but always at random until I went back and cleaned up the drawings. If you don’t mind me asking, what CAD are you using to draw your parts?

Corey,
Sketchup, and like others have said, its probably the coplanar issues. I will go back to day and check all and fix all the possible areas. I can use the first model, and the second one will be used for mold making.

I fixed the models coplanar issues, reprinted last night and NO ghosting/shadow lines. Another great print.

Thanks all who contributed to this fix!