I’m new to the forums and just getting started with my Form 2. Such a great community, I’ve already read some great tips and inspiration here.

I’m working on creating some custom Lego parts, and I’ve noticed that with some of the parts I’ve printed, I’m seeing some streaking effects, particularly where there are raised parts on an otherwise flat surface, such as the studs (see attached picture). Has anyone else experienced this? Am I orienting the parts wrong? I think I used the one-print wizard to orient and add supports, though I think I may have rotated them on a case-by-case basis to make sure no supports were directly attached to the top faces.

Thanks in advance for any thoughts you might have! 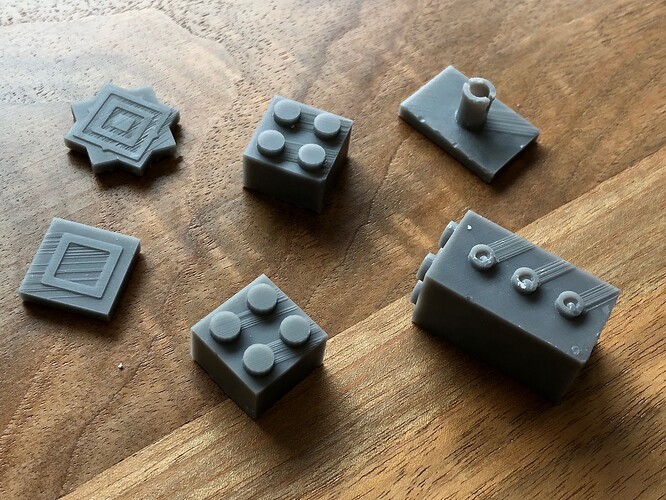 This is an STL file issue, as I understand it.

I don’t know all the inner workings but the gist is that the STL file has problems with separate planes that are co-planar with each other. Something about it makes the algorithm unhappy and generates these lines.

As far as how to fix it, if these are parts that you’ve designed, all you need to do is make your part features ‘overlap’ a tad - make the features protrude into the main body of the part.

If they are not your parts, I would try a program like meshmixer and fix errors, and re-generate the .STL’s as ‘binary’ and at high as reasonable resolution.

Its not just STL- its a geometry problem that can be created in any modeling app and is more common in parametric apps like Solidworks- Sketchup etc.

Ideally- you should not have separate volumes at all, faces coplanar or not.

The correct methodology is to make the surfaces cross as sigmazero says, and THEN to MERGE the two volumes using a boolean operation to eliminate geometry and topology that is internal to the solid volume you are trying to print,

ANY solid object, mathematically, ought to have just ONE single surface on its OUTSIDE that delineates the boundary between solid material and the surrounding space.
Mathematically, a true solid only has ONE side… an Out side,

Making models with multiple separate volumes and unprinting or unmilling geometry still internal is Bad modeling practice and it is the source of most problems that occur when importing models from one app to another,

If your files are no more than 125mb you can fix them using the netfabb free online service:

Also, I strongly recommend Meshmixer for boolean operations and hollowing of meshes.

Thanks all for your advice and thoughts on this! While I’m a designer by trade, I’m a relative newbie to 3D and entirely self-taught through trial & error. SketchUp is what I’m most familiar with, and until I purchased the Form 2 I was using a cheaper FDM printer and these sorts of issues didn’t surface much due to the lack of resolution/nozzle size there. Glad to hear this isn’t an issue with the printer but just in the way my files were prepared!

Typically I have these issues if I import an STL file into SketchUp. I know that STLs are not optimized as an interchange format but rather an output, but that’s usually where I find 3D models as a starting point (such as the Lego models on printabrick.org that I customized). Until @sigmazero pointed out the co-planer issue, I wasn’t aware that there was actually an option in SketchUp when you import STLs to merge co-planer faces automatically which definitely helps. Also, in SketchUp I tend to try to use components as much as I can to make it easier to tweak repeated objects (such as the height/size of the studs) across models, but by nature that then combined multiple objects/faces that share a plane.

I printed two of these pieces again after adjusting the studs/faces to be inset slightly per @sigmazero suggestion, and they came out perfectly (see below).

To @JasonSpiller 's suggestion about trying Netfabb, this seems to be the same service that PreForm automatically asks if I want to use when I brought these “broken” STLs in - is there any difference in using the web-based option you linked to? 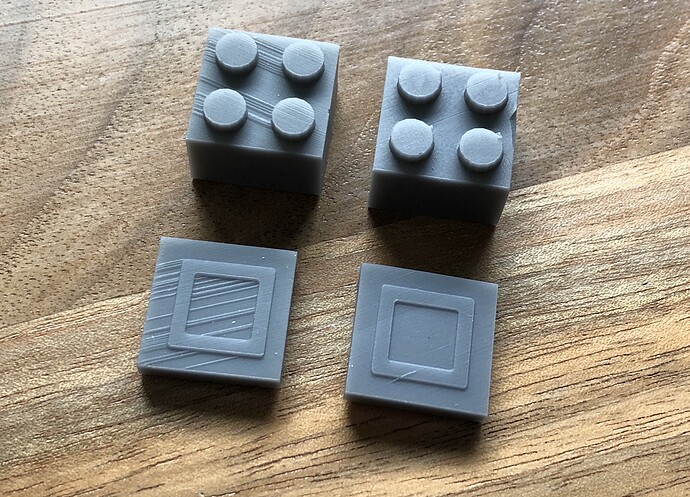 Sketchup is known to output problematic STL files. I would recommend you to have a look ad Fusion 360 and Onshape, both are free to use under certain conditions and are much, much more tailored to the kind of parts you seem to be doing. I have always found sketchup to be kinda… sketchy… and in so many ways that I really do not understand why people still recommend using it.

It is still considered amateur modeling to export models you intend to print as intersecting volumes. The result is interior geometry and topology that can confuse a solid printer engine as to which surface is the correct “outside”… I have even seen SLA printers interpret crossing volumes as a boolean void… and leave that space hollow or liquid resin filled.

You will also note in the parts that you printed that the cylinders have visible facets. The modeling app you are using is modeling circles as 16 flat faces… in FDM this is immaterial— but you are in Form 2 land, now, and the Form 2 is capable of resolving those facets.
Fusion 360 is a parametric app that will model as true circles and cylinders… and you can output to OBJ for import into Preform.

most good quality modeling apps will allow you to set the number of facets they divide a circle into… you will find that you need to model circles at 60 faces and higher for them to print as genuinely circular on the Form 2.

I prefer to use the free online service as I know that I have a water tight working file, whereas the repair in preform only applies to the preform files, not the original mesh itself.

Formlabs printers do not require the meshes to all be welded together, you can simply have parts intersect to be printed as a single object. However, I have had that issue when using FDM printers where the intersection is hollow. But not the Form1/2