Found several posts on Form1 resin tank cracking but would like to share the Form2 resin tank cracking.
I found some resin leakage on the rails after printing so quickly removed resin tank and cleaned up spill.
Luckily there were no resin in the mirror so should be good to go.
I put aside the resin tank with the lid on and the next day saw that it continued to leak. To my surprise, there was a huge crack across the tank starting from the resin spout area.
I opened a ticket and was told that sometimes resin stick on the lid can cure and cracks propagate when you open the lid
and was told to not use the tank anymore (obviously

)
Make sure your lids are free of resin before placing on tank. I wish there was a warning about this. 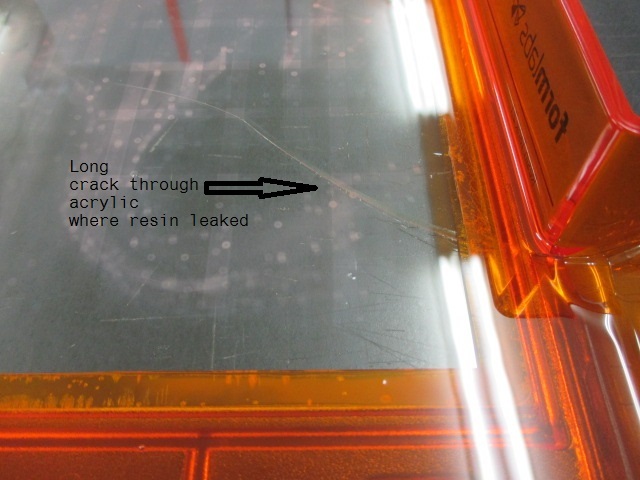 Wow. That doesn’t make any sense. Are you sure what they didn’t mean was, if resin cures and makes it hard to remove the lid, you might crack the tank trying to remove the lid? It’s really hard to imagine how the plastic tank lid could be responsible. The acrylic tank is much much stronger than the plastic lid. IMO, seems more reasonable to suggest the tank might have been defective or that it was over-stressed during installation on the printer than to blame that flimsy plastic lid no matter how well the lid might be stuck down to the tank.

I’d also note, looking at your picture, there doesn’t appear to be any resin along the rim/lip of the tank. Does the explanation you got from FL even apply in your case? Is there any cured resin on the lip of the tank or the corresponding area of the lid?

Does the explanation you got from FL even apply in your case?

This feels like a boilerplate response left over from similar issues with the F1 tank. The rear left corner had that thin section to aid in pouring and it was in fact possible to break the acrylic with the thermoformed lid if you removed it as if it had a hinge instead of lifting straight up (I have personally done this).

In this case? No, doesn’t seem relevant. Somewhat explains their response though.

Also interesting that their choice of wording was “propagate” which implies the cracks were pre-existing. Hmmm.

That is the first I have seen a tank crack at the bottom like that. Wonder if it was damaged in shipping or dropped at some point that caused it to fail?

That is what I understood from her comment as follows ( copy and pasted):

"We sometimes see this type of crack of there is resin on the lid where the lid and the tank come together.
The resin cures slightly, and once the lid is removed, the tank cracks.

As it were, this type of crack could cause leaks, as it could continue to expand. We recommend not using
this tank for printing. Do you have a spare tank you could use? "

As my main issue was the leak (which luckily did not touch the printer mirror, phew) I wondered what the cause of the leakage was and when I checked my tank the following day I found this. There might likely be some resin by the rims when I closed the lid. The attached figure was after draining.

On another note, if I don’t use my tank for a while, I do drain the resin and only wipe the residues before I use it again.
I told them, I wished there was a reminder that this is a possibility and the response was " thank you for the suggestion about the reminder label" and all I could think of was , oh bless her and thought it would be good to share in the forums for others to be careful of as I learned a lot from the forum as well.

That is hard to tell unless I check their shipping and production history. It also traveled a long way towards Japan so that could be possible.

This is the picture from the spout where I suspect the propagation might have started. 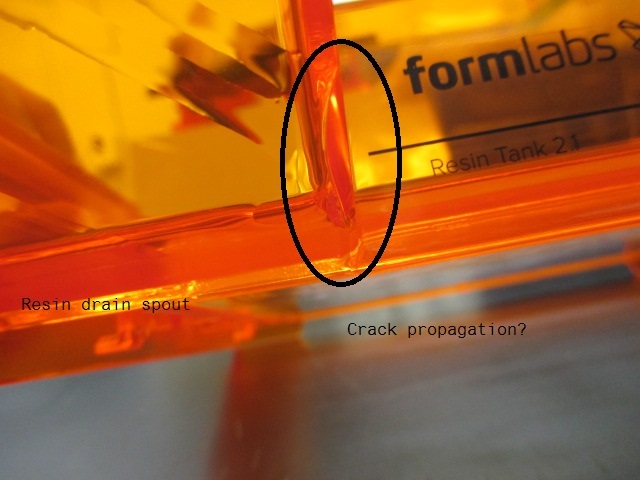 Great idea on the tape!! So simple and why did I not think of that!!

I don’t know why they put the drain spot on the highest pressure point of the tank ie back corner on hinge side has the least deflection of forces. Anyways on new tanks run some clear packing tape around the outside of the tank starting from the front panel. This beefs up the tank and also in case of a crack would prevent a leak. So far for myself this has prevented any cracking. Guessing the tape is just strong enough to make the difference.

This has been a problem with FL tanks forever. I’ve discussed this with an injection mold company and their take on it is 2 fold. The design of the part is inherently bad, improper radii and flowcontrol in the mold which produce stress points and improper plastic for the application. I had 3 tanks made of glass for the F1+ and have never has a problem since. It is a shame that a fundamental problem that can and has destroyed printers is not addressed by FL