Print Orientation for this Design

Hello, I made the noob mistake of orientating the following part in a flat orientation with the detailed text facing away from the build plate (I.e. support structure on the bottom side of the part). The text graphic extrusion came out it pretty poor quality and the printer bound up a lot as the tray had to break friction of the entire face, making a terrible noise. Now that I realize my mistake, what orientation would you recommend to get the sharpest feature detail?

Many thanks in advance.

The file is titled “coaster” so I assume it’s 4"-5" diameter. I would probably orient it 45°-60° (flat being 0°). Keep the text facing the tank. You can try it vertically as I mentioned, just go nuts with the supports, use more than you think you will need.

If the gear teeth are only for decoration they could be edited to require less support.

I would orient it at a 15 to 25° angle on both X and Y, with the face without text facing the tank. Usually I would print such parts at a close to 90° angle but in your case it may be difficult to clean the gears.

Flat on the BP was definitely not a good idea, and the bad results on the text are probably due to the part being quite unstable because of the unsupported surfaces on the other side of the part.

Assuming that the object is 100 mm in diameter.
The smallest letters seem to have a thickness below the minimum for printing.
Good luck.

So here is the outcome, image on left was the original flat orientation. image on right is the auto orientation output.

The auto orientation produced much better results but not perfect yet.

I’ll have to tweak my design to make the features larger to achieve the desired result. 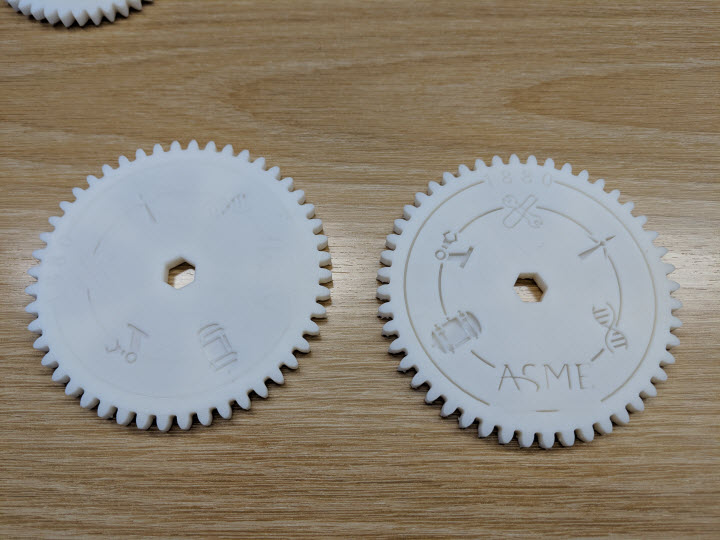