I just want to start this by saying that my Formlabs machines have been, and still are, great workhorses for our business and are extremely reliable, especially because we have deep knowledge on optimal print settings, orientations, etc.

However, are there any other power users on the forums who feel like the Preform support generation is moving backwards?

I have logged several support tickets in the past concerning some issues and feature requests to make Preform much more efficient. I’ve also raised concerns in the past about the new settings being more failure prone.

The same model that I know prints successfully in past versions is now flagged as having a printability issue in the new version. It seems like the algorithm is super conservative now, more so than before.

There are also several other bulk manual editing features that could be added which would greatly improve the speed at which some of us generate print files, especially for large models on the 3L.

I’d really like Formlabs to start focusing on Preform - specifically on how to make support generation more efficient for us power users who know that default settings are very overkill…and also to maybe take a step back and re-evaluate whether the current supports algorithm is really going in the right direction…because lately it feels like it’s not (more print failures, higher densities required, more post-processing, more material consumed, etc.)

I want to show a concrete example of some things that could help for speeding up print processing.

Below are two parts. The left is one that has supports manually placed by me for minimal post processing and material consumption, but that I know has printed successfully many times in the past.

The right is Preforms auto generate with 0.5 density (the lowest I can go). Some issues I face on a daily basis, especially on 3L parts are listed below. 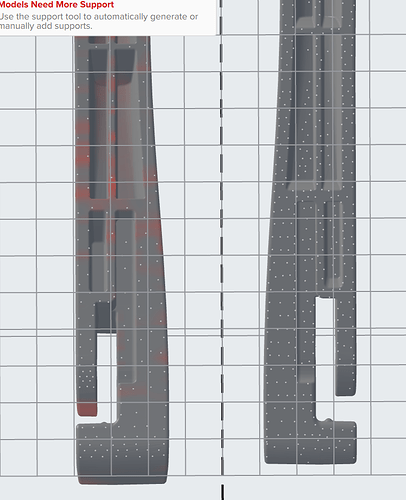 Thank you for the Preform feedback. I have a couple of notes on the things that I know work when it comes to supported parts, and the rest I can put into feedback for our software team.

Preform does, by its coding, prioritize success over minimal supporting and I’m sure you’ve noted that you can remove some percentage of the supports and still have success- it’s preferable for most users that we offer print success over support minimization. Also, on Preform 3.28, you should be able to rotate a part around the z-axis without losing the existing support net; just use the ring on the part to turn the part. Other rotations change the orientation of the part and so reset the supports.

Otherwise, I’ll put in a request for bulk supporting over an area that isn’t the entire part for you, as well as noting the issue with support density.
-Jen

I’m voting for more attention to leonhart88’s issues. How about more effective adjustments? I routinely set density, touch points, and slope to the minimum, as a default, and rarely have failures.

Even at the minimum settings, I still get support matrices that are so dense they turn into solids, rather than the scaffolds the UI shows. That wastes a huge amount of resin, and my time, since the supports don’t separate easily.

Maybe an “expert” mode that offers something between the hyper conservative defaults and manual?

Thank you for your added feedback on this. I certainly agree that more control and customization options for manipulating supports in PreForm would be quite useful. I’ve passed your feedback along as well, highlighting the need for more control over support density as well as improved support fine-tuning in general.

Preform does, by its coding, prioritize success over minimal supporting and I’m sure you’ve noted that you can remove some percentage of the supports and still have success- it’s preferable for most users that we offer print success over support minimization. Also, on Preform 3.28, you should be able to rotate a part around the z-axis without losing the existing support net; just use the ring on the part to turn the part. Other rotations change the orientation of the part and so reset the supports.

Totally understand that, but it would be nice if there were additional “advanced” features for power users like myself who can start with minimally supported parts and add supports where needed rather than going from a vastly over supported model and having to remove supports. More flexibility/tools/features for advanced users is what I would like. For example, being able to select a face or drag select an area to populate with a given density of supports…or the ability to block erase or add supports with a paint brush would be amazing.

I understand other rotations change the orientation and might need resetting the supports…but in many instances this isn’t true. Especially, say if you are needing to rotate a part slightly in the X & Y due to a cup that Preform wasn’t detecting or something like that. Rotating by a small angle won’t really change anything, but currently Preform will force you to repopulate supports.

Another example is illustrated by these images. I had originally been printing parts with a higher tilt angle as shown highlighted in red. However, I wanted to tilt it more parallel to the build plate to increase print speed. All of the support locations on this part can totally be kept the same with minimal issues during support generation. In fact, I basically had to manually re-add all the support points to roughly the same location they were originally in on the tilted piece. There are many instances like this where one would ideally keep the support locations…or at least be asked whether they would like to keep them. 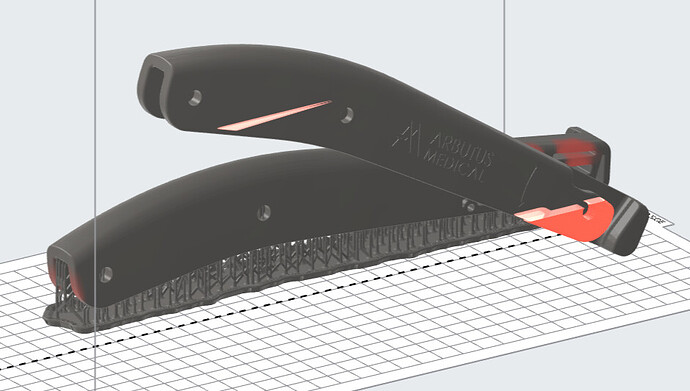 100% agree here. The default settings are so conservative that I never use them anymore because of all the reasons you laid out.

Like you, I have extremely high success while probably routinely having 50% or less supports on parts compared to default generation.

An “expert” or “advanced” mode would be perfect…many FDM/FFF slicers have options like this for power users.