Frame that holds the resin tank is shifting forward and backward

Can you take a picture of the part you’re referencing? That would be a big help in working to troubleshoot this.

The tray carrier is mounted on springs which are used to level the tank. I’d recommend against tightening these screws as it can impact printing and often requires factory re-calibration to correct.

The part I’m referring to that is easily moved forward and back and also rotates, is the upper most black frame.
This is the frame that holds the tank.
This frame is mounted on top of another frame by means of springs and scews, which, i assume limit it’s motion, but allow it to move, such that the tank, platform and elevation system is not ripped apart during the peel process.
You can move this upper frame forward and back and also rotate it with a small amount of pressure. It’s not totally free to move, however, I have my suspicions that the tank is not returning to the exact same X. Y and rotational position after the peel process has completed.
Maybe it’s not critical that the ‘tank’ return to the exact same position, and maybe it’s only critical that the ‘platform’ return to the same X, Y position. If this is the case, please inform me of this. I was having print issues where the print was getting displaced in the X, Y plane, both position and rotation, at a particular layer. I surmised the tank was moving, so I fashioned a holding system that prevents the tank from sliding within the top frame. I’m convinced my system of holding the tank in the upper frame work perfectly, However, I’m now suspecting the frame that holds the tank is moving a bit during the peel.
If I’m going down a wrong path of analysis, please inform me. 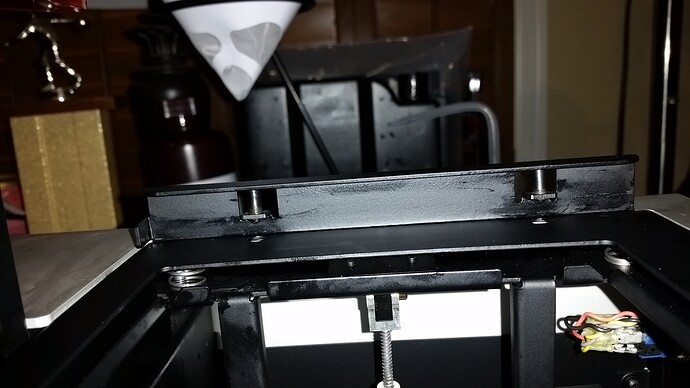 Ah, I’d missed that this was a Form 1/1+. These were a bit before my time, and our support team is going to be best suited to look into this with you. You can get in touch through this page.