Hello.
We have a Formlabs 2 at our college that we have been trying to get going. First few prints have been awesome using the Castable V2.
However as of late the prints (the same print that turned out great) has gotten worse and worse.
It’s almost like the layers got messed up and are offset a little. Very messy prints and the Castable liquid in the tray has tiny soggy lumps in it. 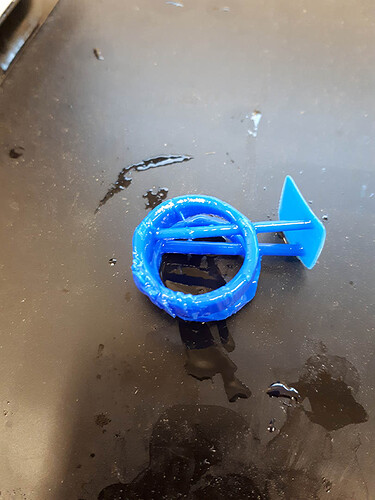 How old is the Resin Tank? You might want to change that and filter the resin to see if it fixes the problem.

Can we clean the tank or is it garbage after this?

Some people re-coat the tanks. Most the tanks last about 1-2 L of resin ran through them, then they are replaced. Formlabs will be releasing the LT tank soon (I hope) and those tanks are supposed to be 20x the life expectancy. I have a few customers waiting on those and am excited to see the results it produces.

It looks like your print isn’t stable enough, if that’s the actual print with some kind of base then the base is too thin and you have it supported on just one post, as it gets taller the part will flex after each layer when it slides the tray and the layers will become misaligned.
If you have partially cured resin in the tray then it would be best to filter the resin with a paint filter, the tray is probably OK if you’ve printed less than 2L.

Thanks all. I will give cleaning out the tray a try and bolster up the supports. Thank you