I don’t have the printer yet, but I am trying to understand some of the choices Preform makes.

In these two PreForm screenshots, there’s the same part. The picture with the 45 degree tilt is what one-click print did. The other one was me just putting it flat to the build plate and then generating auto-supports.

Clearly PreForm is doing what it’s doing for a reason. I just don’t understand what that reason is, which is why I’m asking here. 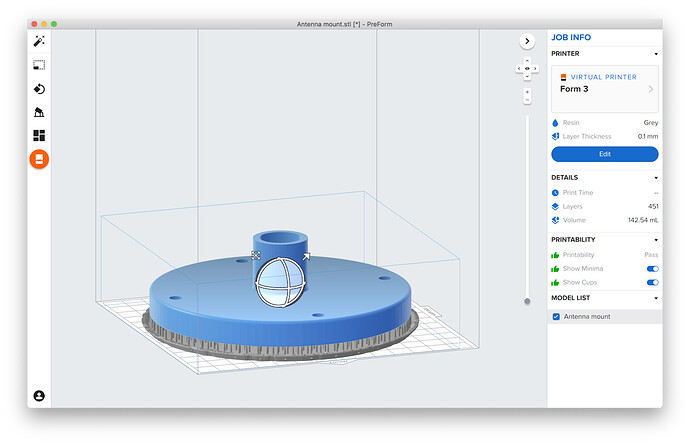 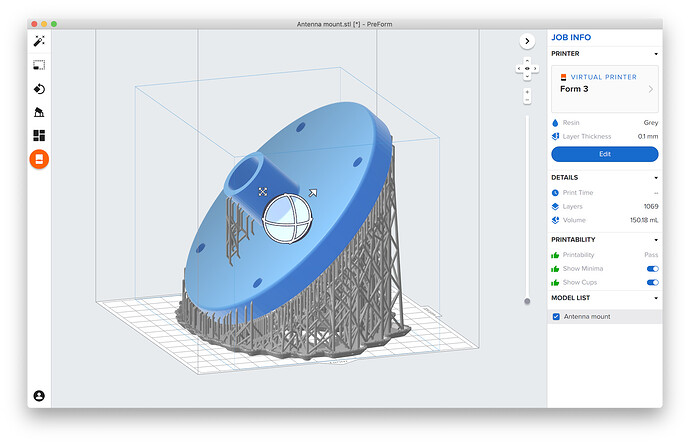 My Form 3 hasn’t arrived yet, but the very general rule in stereolithography printing is to avoid presenting the release surface with one huge flat region of your model. Problem being that it greatly increases the lifting force needed (ie, put a huge glass plate at the bottom of a swimming pool and try to lift it off — even if grabbing by the edge or corner)

If you were to compare the actual slices of each orientation, the angled one ought to have profiles with smaller surface areas; presumably easier to peel off the rigid release surface (Form 2 vat)

Admittedly, I didn’t follow this rule much with my EnvisionTEC and B9 printers. Jewelry-focused build envelope of my EnvisionTEC never stressed the stretched FEP vat, and my B9’s sliding vat would horizontally pull the PDMS layer away to sidestep that hydraulic suction. This is what got me interested in the Form 3; the idea that I’m no longer dealing with flat surface (model) against flat surface (vat).

The Form 3’s flexible bottom vat might make this ‘rule’ obsolete entirely or partially, but it’s clear that PreForm is going to follow the established guideline for now.

Ok, that makes perfect sense. What I think I am going to do (when the time comes) is flatten the item down enough that it won’t need supports on the top surface, but not all the way.

Thanks for the explanation.

This shouldn’t be as much of a problem for the Form3, for the Form3 you would probably be able to print directly to the platform and wouldn’t have to worry about it. The only problem with printing to the build plate directly without using supports is that currently with the Form2 it changes exposure times after about 5mm which leaves a line on the print, I don’t know if that will continue to be the case with the Form3.