I’m writing with a strange problem I’ve just encountered with Tough resin on Form2.
As you can see in the picture below, there are 3 prints all of them with the same settings and raft thickness set to 2 mm. I printed 28 pieces in separate 3 sessions, one after another.

Do you have any idea why all three rafts have different thicknesses? The models themselves are just fine - size wise, it’s just the rafts. Only the first session went with 2 mm rafts, then as you can see, the rafts printed thicker and lastly way too thin.

During the second printing session I heard some noise as if the platform struggled to move freely. It happened twice before 13th layer. Later things went normal.

The resin tank has only 200 ml milage 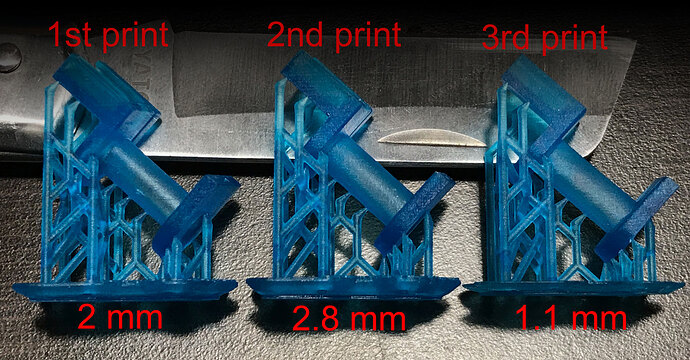 Have you used the same build platform and tank ? Have you or someone else changed the Z Offset value on the printer in between the prints ? Are the prints made from the same file which stayed on the printer of did you reload them from Preform each time ?

It is indeed strange that the raft thickness changes without intervention, i’m sure there’s an explanation in something you changed.

Yes, the build platform and resin tank are the same. With the first print the tank and resin were fresh.

The Z axis offset has not been changed at all.

The first two prints were from the same file uploaded to the printer and the third was the same Preform file but uploaded again with no changes whatsoever. (no update of Preform or printer either)

Before I printed the whole batch, or rather 3 of them, I did some tests on a few sole models to verify measurements. Once everything seemed fine with my design, I went on printing.

Just after the last batch did I discover the discrepancy between the three rafts. Strange indeed it is to me too.

And as I mentioned in my initial post, the only weird thing was the sound or dragging motion within the first 13 layers or so.

OK so, usually this wouldn’t be so much of an issue because we don’t really care about the raft as long as it prints fine… but in recent updates, Formlabs added more features in Preform to better support “on build platform” printing and if this first layers thickness variability is also occuring with such prints then it’s much more of an issue.

I have not been measuring or giving attention to the rafts in general, but have been printing quite a bit directly on the BP with optimised parts and have not seen any issue.

Maybe we can summon someone from @Formlabs to give their thoughts about this ?

Not positive but here’s a theory;
One main purpose of Rafts is to soak up tolerances. Raft thickness (or if printing flat, Z compression correction in Beta) is a function of the Tray, the Build Platform, and the machine.
Each tray is slightly different in Z-height, and not perfectly flat. Each build platform is not perpendicular to Z axis. And each machine’s Z axis is not perfectly vertical.
Rafts soak up all these errors. When printing the first several mm’s of every print, the machine compresses and smears these first few layers. what is left is a (nearly) perfectly flat Z-plane (the ‘top’ surface of the rafts). then the supports and parts are built on top of these new, nearly flat planar surfaces (rafts).

You are absolutely right, The rafts are there to give Formlabs a way to guarantee BP adhesion without compromising the model.

However, with the same tank, same BP, same printer, same resin, same file… there shouldn’t be such a dramatic difference, even across the whole BP surface. Initial layers compression does exist but it shouldn’t vary, at least not that much.

Haven’t really looked, but not sure how repeatable the BP locking mechanism is. So just the act of taking the same BP on and off will change the Z error stackup to some extent.
also, OP didnt mention: were the 3 models shown printed in the exact same location on the BP?

Thing is, on the two Form 2 and across the dozen of tanks and 3 BP I use, I have never seen such a difference. I print parts in Tough and Grey pro directly on the BP, on two different printer with one tank per resin and across 3 BP and have never seen difference of more than a few tenths of millimetres.

If a BP is skewed by 1.7mm there’s a huge issue and it would for sure cause adhesion problems on one side vs the other, as this value far exceeds the range of tuning for the Z axis. Locking mechanism is much more precise than that, so I don’t think this is an issue either.

Hi,
The location of all the prints was identical. The only difference was in the third print which had 4 models removed but the rest remained where they were before.

Speaking about initial layers compression, the thing is that it observable on all of the prints even on the third squeezed one. Though, you can see the the compression layers area is proportionally smaller to the previous prints.

I’ll have another go and see what happens and I’ll share the results.

Hi @august, earlier commenters on this thread are correct - tiny differences between build platforms, tanks, even things like if you don’t slide the build platform all the way in when you close the handle…these can cause slight variations in Z height. One purpose of the rafts is to absorb those differences so your parts are unaffected (which is looks like they are).

Specifically in your last print where you removed 4 models - the compression force is the same, so with 4 models removed you are distributing that force over less surface area, so each part will actually get a little more compressed in those first several layers in the raft. This would explain why the raft is so much thinner in the 3rd print.

Specifically in your last print where you removed 4 models - the compression force is the same, so with 4 models removed you are distributing that force over less surface area, so each part will actually get a little more compressed in those first several layers in the raft. This would explain why the raft is so much thinner in the 3rd print.

That’s the missing link. So obvious ! Wouldn’t have guessed that it had such a drastic effect.

Hi @gtl, this seems to explain everything. Thanks a lot!