Hi
This was my first print on Form 2.
I removed the models, put them in IPA while shaking for about 30 seconds and then left them for 10 minutes. Then I changed to the second bath and repeated.
Then, I post-cured them below one of those nail lamps for 30 minutes.
I washed on water with a toothbrush and now I don’t like the surface. It’s white on some areas. It seems dirty.
What went wrong? 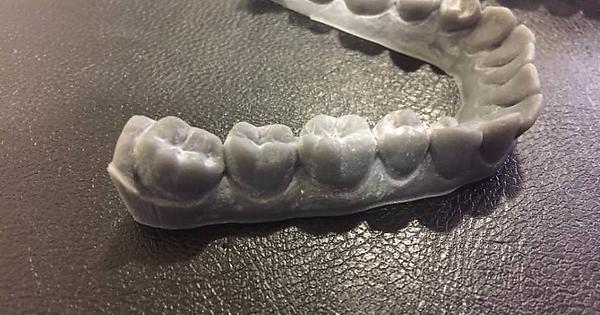 What resin are you using?

It’s the Grey Resin from Formlabs

My guess is that the white-ish discolored areas on the prints are from the toothbrushing.

I wouldn’t normally expect grey resin to scratch like that, but maybe 30 minutes under the nail lamp wasn’t quite enough of a post cure to harden it against toothbrush bristles. I’ve observed a variety of resins show white scratches and abrasions when they’re handled roughly before being fulling cured.

That’s not the typical surface and there are a few things we can try to get this corrected. How clean is the IPA you’re using? Some of the matte resins will leave behind a powdery resin like you’re seeing and refreshing the IPA can be a big help.

You might give the parts an hour or so to dry before post-curing them. If IPA is on the part while they’re being post-cured, it can lead to gummy sections after curing that might look like this after being agitated with a toothbrush.

Try rinsing in your main container of IPA and letting it sit for 10 minutes, and then just do a quick rinse in your clean IPA to get any residue that the first one might have left, and then rinse it with room temperature water for a moment (do this with the lights turned down or it’ll start curing unevenly and leave spots on the print) and fill a container with enough water to cover the part and put the part in the water and put the container in your curing station and let that cure for 5-10 minutes. After that, take out the part and dry it with a paper towel and put it back in the curing station for 45 minutes. Don’t use a toothbrush, that shouldn’t be necessary and will damage the surface.
The reason for the water is that it helps the outside cure more quickly by blocking oxygen from the surface since oxygen inhibits curing of the resin.

thanks. I followed your tips, printed a couple of models and now everything looks fine