White residue on all my prints

I am not sure if this is the right section but I really didn’t think this warranted going in the support section.

When I print and post cure my prints (Clear and Black V02) I notice what I can only explain as a white residue / cloudiness. It sands off but I am just wondering am I not cleaning the print good enough in the IPA bath? I will gladly post pictures if it would help.

I can clean it up for the most part but would like to avoid it if I am doing something wrong.

Try rinsing the print in water before post cure.

The alcohol bath doesn’t destroy the uncured resin, it just dissolves it. The resin goes in to suspension in the IPA and over time it will cure in to tiny solid particulates. The bottom of my wash tanks accumulate a thin/fine dusting of this particulate if left to sit for a while after being used. It looks mostly white, even though the resin wasn’t. Stir it up, the IPA gets cloudy, so for sure some of that sticks to the print when I take it out of the IPA.

I have been printing last night with black resin and after the IPA bath I washed the print in water and it got clouded and changed its color to grey. After leaving it to dry out it returned back to its original color.

I presume your IPA is not highly concentrated or you mixed it with water previously which causes this effect?

If you have the lights on while rinsing the print in water, the resin will start to cure unevenly which will cause lighter areas on the print where the water is. A lot of times, it’s not residue but the surface of the resin being cured.

Thanks for all the info and suggestions. This whole Resin thing is new to me, I am still trying to take it all in.

If you rinse in IPA then toss it into hot water then add light you can force a lovely white patina on the whole print. Any water honestly- just make sure your print is dry of the IPA before putting it in water to prevent this. 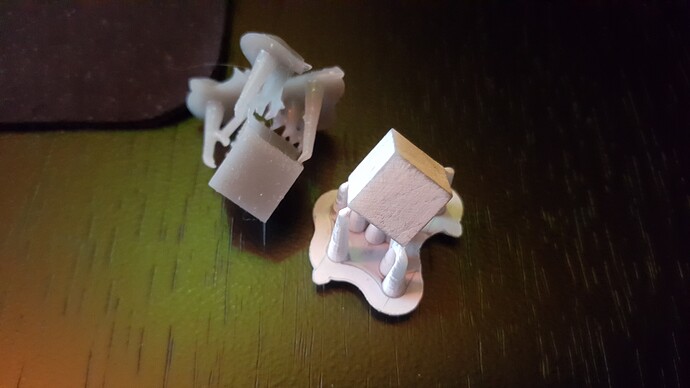 I bet that is it, I have been curing in water because I read that it cuts off the Oxygen and makes it cure faster, I bet I am not letting all the IPA evaporate first. Thanks SGruber!

Hi,
after the alcahol bad, i take off the suport. After that i but the pice under UV. Once the pice is not more stichy
you will not more have residue.

@gregor616, you don’t have to use water. You can also try glycerin or mineral oil. I think the former is cheaper and also water soluble, so it washes off easily after the post curing.

I did an air cure of some black parts today and they hardened up nicely with no residue.

I didn’t realize you were curing under water. That does something to the surface of the print, maybe changes the surface tension of any remaining uncured resin. I can only guess. But it does change the surface finish of the part I doubt it’s a problem of remnant IPA. IPA dissolves readily in water. It won’t remain on the surface once immersed, like an oil might.

The only resin I cure underwater is Flexible, because FL says that is necessary. The more-plastic-like resins air-cure. Besides making the surface a bit more foggy, I’ve found that water curing tends to make parts warp more as they cure. I couldn’t get a part to stay flat if I water cured it. Also, I’m less concerned about the surface of the part curing, than I am about the resin on the inside, and immersion in water doesn’t do anything to accelerate that curing, it’s already in an anaerobic state.

underwater is Flexible, because FL says that is necessary. The more-plastic-like resins air-cure. Besides making the surface a bit more foggy, I’ve found that water curing tends to make parts warp more as they cure. I couldn’t get a part to stay flat if I water cured it. Also, I’m less concerned about the surface of the part curing, than I am about the resin on the inside, and immersion in water doesn’t do anything to accelerate that curing, it’s already in an anaerobic state.

I’ve found the warmer the water the more likely it is that this will happen. If the model has had a chance to dry I’ve never seen this at all though.

I notice in my home made Jar the water definitely got warm after a few hours. I cured a few prints without water and like the results much better.

Yep. The LED strip for my curing jar design are 20W I think. Watts = Heat. They do a reasonably good job of heating up the water over the course of a few hours. And post curing in warmer ambient conditions means the resin gets a bit softer as it cures, which I think is why it tends to warp more.