In some prints, the supports touches the walls and merges.
Is this a software problem (bug)? 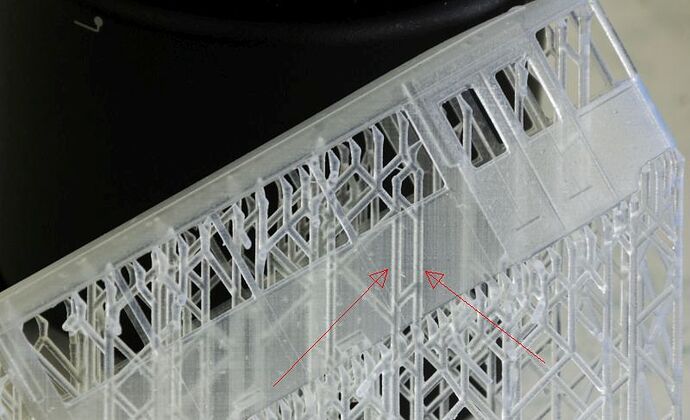 Looks like a bug indeed. For this model I’d recommend flipping it so that the hollow area faces the other direction. You’d have an easier time removing the supports and sanding them this way.

It’s not really a bug, the issue is that the support generation makes sure that the supports don’t touch other parts but if something is close enough to another surface then it can stick even if there’s space between them. That’s due to the laser reflecting off the pigment particles in the resin and curing resin around where the laser hits. Ultimately they need to adjust the support generation system for the materials so that the ones with more pigment have the supports angle off so that they are further away from surfaces.

Is this with the latest version of PreForm? I was hoping they did something to help with this happening.

It is a bug and has been for a very long time now. The solution is not to reorient the part but to give us the control to move the supports at the base and touch point. As well as having more space between the supports and the part.

Yep, this bug has literally always been in Preform, and has been complained about for over 2 years.
@Formlabs - can you please bump the priority on this? It’s burned me more times than I can count, and there’s really no excuse for it to exist - just add a knob to set a minimum distance from the part - it’s obviously already a hard coded value in your software, so just make it a variable that defaults to your hard coded value with a textbox in the gui. How long or how much effort can that actually take!!? Sheesh! Dynamic dragging of the support base would be awesome, but in the meantime…

Ultimately they need to adjust the support generation system for the materials so that the ones with more pigment have the supports angle off so that they are further away from surfaces.

no. they need to give the user control.