Most excellent, I must make one!

1mm wall thicknesses are a challenge to print successfully. Looks like you’re getting the hang of it now! Nice!

I have printed a series of Stands with 1mm walls and a logo on the front. They came out really well - Just selected no internal supports, let Preform choose the orientation and supports made 7 copies to fill the build plate and hit go! all seven came out fine. So i printed 7 more

Well I suppose luck had more to do with it than skill! Well that and the brilliant people at Formlabs!

I think I am going to attempt the same thing sans internal supports to see if that comes out.

I’m probably going to cast it out of copper - I’ll post pics of the cast - if they are worth sharing.

Yes, pix! Thanks for sharing your technique:)

Well I tried our Lost Shell Sand Casting method, and the process doesn’t work nearly as good as it does with PLA plastic. 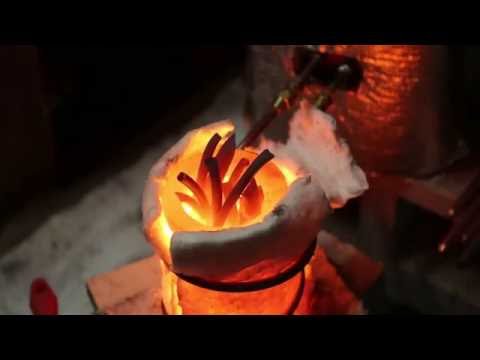 The method involved buying the print in sand and letting the molten metal vaporize the plastic.

It seems the part of the mold that filled first (his head) turned out pretty good, but the plastic wasn’t able to vaporize quickly enough and rose to the top of the mold causing turbulence and disrupting the sand mold (best I can tell). So I guess I will just stick to investment casting for SLA prints.

Worth a shot - otherwise I would have been left pondering if it might work well enough to use.

But I love the accidental outcome - it looks like an ancient artifact. Cool!

But maybe the printer is just phase 1, where you print the model, cast that into a simple cutaway silicone mold, then cast solid versions of the print from a material that burns out very easily (possibly expanding urethane foam[1]?). Bury that cast object (in whatever castable material that burns out cleanly) in the sand. A lot cheaper and faster to make many as well.

Thanks! Not really what I was going for but art tends to have a mind of its own.

You are correct for something like this it would certainly be possible to make a silicone mold and then use wax or some kind of foam. With wax though, it would have to be investment cast adding additional costs, time and energy.

But the point of this process (and my Lost PLA process) is that it can be used with geometries that can not be removed from silicone molds. Further more, silicone molds don’t allow a high degree of dimensional accuracy so machine parts (e.g a gear) would come out too distorted to use - in my practice at least.

Another reason is I am mostly interested in one-offs. So for a single cast, it is less expensive and less time-consuming to burn out the original than it is to create a mold of it (castable silicone isn’t cheap). I don’t have any intention of starting a buddha statue factory, so I wouldn’t really make use of a silicone mold.

Curious, Why did you not use their Castable resin… I thought that was designed to be burned out

Its designed to be burned out in the lost wax process and its much tougher and harder to burn out than wax. You would get much the same problem trying to use it for pour casting in sand.
It would work perfectly in investment casting though.

Gotcha, I know just enough about foundry to be dangerous.
I use my printer to make master patters for RTV w/ Poly Parts so no burning involved.

That won’t work for most the geometry I am interested in casting in metal - undercuts, though-holes etc. are a no-go. Also, since I am mostly interested in one-offs, for me, a RTV mold is an extra process and expense.

An alternative suggestion would be not to use SLA printing but instead to get some blocks of Machinable Wax and Mill the items you want in Wax on a CNC milling machine. If you have undercuts and holes etc then you can either use a 5 axis machine or mill the object in sections and glue them together with superglue into your final object. You can then use that to cast.

I have a large (huge?) 4-axis CNC machine I use for carving patterns. But even with a 5-axis machine - its not practically possible to machine the same geometries a 3D printer is capable of producing. The detail practically obtainable with a CNC machine isn’t even close to a SLA print either (for organic geometries at least).

That said, if the pattern is wax, it still requires investment casting which is already possible with FDM and SLA prints. The point of my Lost Shell Sand cast process is it eliminates the need to use investment and works fine with FDM prints.

This was just an experiment to see if SLA prints worked similarly well as PLA does.