Can someone explain to me why one channel in my part is shown as cups. As you can see from the top view these are see trough 6 holes. I wanted to print this part sitting directly on the platform but preform ( 3.10 ) won’t let me…

That first “perspective” picture shows the problem. When the part is placed directly on the base, the build platform “seals off” the opening that is against it. Imagine the situation once the first few cm of that print are built. You have a long cavity that is closed at the end touching the build platform. The other end pushes against the tank, making the cavity somewhat airtight. That forms your cup. Resin trapped inside won’t tend to drain (the same way you can lift a column of water by plugging the end of a straw with your thumb).

You can either lift the part up onto supports, or put in a small horizontal vent hole near the base-end of that channel: 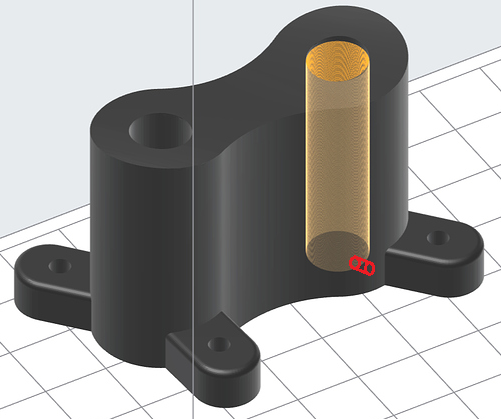 Your walls might be thick enough that you could just ignore the warning and see what happens, but you’d have to filter the resin if it fails and there’s a risk that it might harm your tank.

Makes sense. Thanks rkagerer.
So at this point I’m wondering whether I should make a vent hole for this one specific cavity only, since it is highlighted or should I add 5 more vents for the remaining channels too… will experiment and see what happens.

I think the four smaller holes are small and short enough that it’s not a concern.

I’m not sure why the other large hole wasn’t flagged by Preform. To be on the safe side, I’d vent both.

Do you really need to print the part directly on platform? You could print it with rafts and support (but in the same orientation) and just sand the bottom flat after removing the supports. The first few layers will get squashed anyway when printing directly on platform, so your Z accuracy would presumably be similar…

So as I expected after adding vent hole to the highlighted cavity the other tall one got flagged. Venting that one too resulted in green thumbs all around. I did that just for experimenting. For the final print I’m going with vents added to all 6 cavities. Better err on the side of caution. It’s just a fixture. Bottom or general appearances are not that important as long as it does it’s job. Although good surface quality would be nice…

Glad you got it resolved. I really do think the smaller holes would be fine without vents if you choose to test out more iterations of your design in the future.

@Pankl_3D underscored a good point - if you need dimensional accuracy in the Z direction (i.e. up the height of the part) then you either want to print on supports, or tweak the “Z-Compression Correction” advanced setting in Preform. As he said, the first several layers come out squished. I have a diagram illustrating that here.

If printing directly on the base you might also notice some bleed around the edges. I’ve found that can usually be reduced or eliminated by adjusting the Z Fine Tuning on the printer.

But lifting it onto supports eliminates both of those issues and your cupping in one stroke, and gives you a nice, chamfered raft to ease removal.

(Personally I like printing parts like this on the base, but it can take a bit of tweaking to dial in acceptable results).

My part came out well. No issues. I measured it’s length and it matches 3d model almost spot on. If there were any squashed layers the difference is unnoticeable. After all part is like a tree trunk solid without any horizontal cavities.
Thank you all for your help.