Has anyone had success printing small channels within the models. And if so how do you generally position the parts. I have a custom part that needs an 0.035” (0.889mm) wire to run through the middle of it. I have tried multiple version of the channel and latest one is at a 1.3mm diameter (almost 50% larger than the needed size) however the channel is still pretty tight and in the middle (length of the channel is about 160mm) it becomes almost impossible to push the wire through. Currently the part is positioned diagonally. I have also tried flushing the channel with alcohol right after the print in hopes to clear it but that has not been very successful. I reaalize the size of the curing laser is at 0.14mm which leads me to believe that a 1.3mm diameter channel should be just fine ( let’s pretend it will go down by at most 0.28mm which is still at 1.02mm final diameter). Any thoughts or suggestions would be appreciated. Thank you.

Sorry, but never had much luck with small bore channels through a part; we usually end up drilling them out with sharpened piano wire if they are straight, but if there is a bend in the channel, this is not possible. Can you split the model and build the channel as two troughs, then glue the parts together? Laying nylon fishing line in an oversize channel might help, flood the mating faces with resin, assemble and cure together with UV, then pull the line out. As you pull it, it stretches, and hence reduces its diameter slightly and will release from the resin and come out, leaving a smooth bore behind in your part. We used to do this all the time casting vacforming tools from ali-filled epoxy…

Thank you. I will try that. I was going to drill as you mentioned but I like the finishing line trick. Thanks.

I have had no trouble printing wire channels that are straight thru. If you need an angle bend it must not be too sharp to 90 degrees or the wire will nor bend easily. Using clear resin allows you to see the wire as it moves thru the channel.
I am not a 3D modeler by trade so sometimes when doing intersections I forget that the intersected parts need to be removed or they interfere with the wire channels.

What has been the smallest size you were able to print? And if so how do you position your parts are the at 90 degrees to the bed so that channel is perpendicular or is it still at some diagonal angle?

I am printing in white for this projeft. It has a little more strength due to the size of the part.

I routinely print channels inside my part with holes on CAD that are 0.035" @ 0.5"-0.75" long and they end up being anywhere between 0.000" and 0.025" diameter after the print. It might have to do with surrounding wall thickness too, but I can’t say for certain. My channels are just straight though and I orient them to build vertically. I believe the problem with orienting them in other ways is that the laser overcures depth so a previously uncured layer is going to get cured on the next layer or perhaps 5 layers later and closes off your channel (this is why the underside of a part is always poor quality). Since you have a 90 degree bend, I don’t see any way of getting around that issue unless you can somehow separate the part. Flushing with alcohol is definitely necessary when doing channels like this so keep that up in case one does print clear. Good luck, let us know if you figure something out.

Unless the channel is vertical there will be some shrinkage due to how the light will cure extra material on downward facing surfaces.

Hi all. Thank you for your feedback and help. To clarify i have a straight channel, no angles. I am hesitant to print the part at 90 due to bottom piece. However this may be something I could print directly on the bed.

I am also uploading a couple images of the part in case someone has ideas on how to better position it. 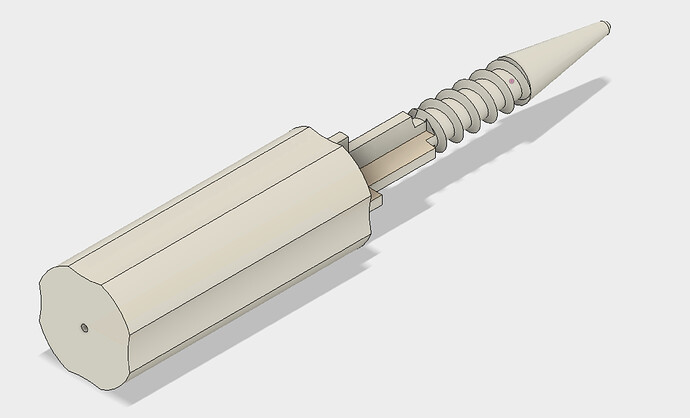 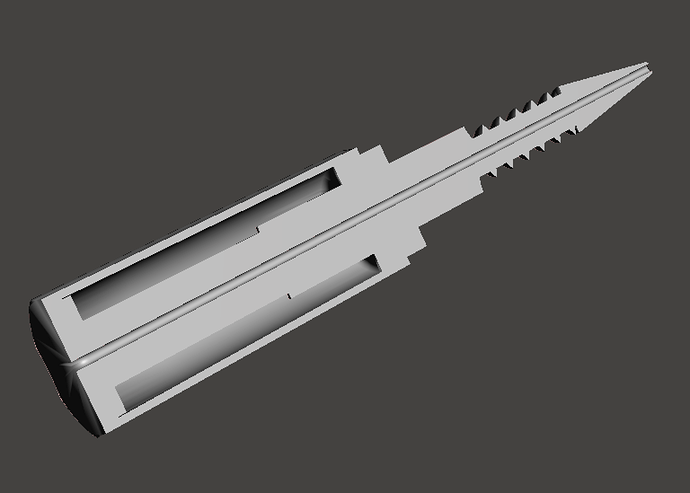 A 45 degree axis is likely to be best here as far as resolving the channel goes, as that will maximize the cross-sectional area. 1.3mm is well within the minimum hole diameter spec so I’m surprised that this isn’t resolving. After printing this, I might recommend trying to run IPA through the channel to clear out any residual resin. If this is continues to fuse, get in touch with our support team so that we can help out with next steps.

To build on Frew’s answer - the minimum hole diameter is not a given - it depends on the length of the channel. The images in the Design Guide are fairly indicative of the test parts used for these measurements so you can see this is not a particularly long channel that was used to establish a reliable minimum. For tall thin wires, as with longer internal channels - think of it more like a ratio in terms of what will work successfully rather than a upper or lower limit across all geometries.

We have been talking to a customer (with the hopes of a future resource!) who has made some very impressive millifluidics and learned a lot along the way. Here are some anecdotal working notes:

The parts were printed flat with a rotation in x of 1.5 - 2 mm, with additional material on either side of the channel to prevent parts breaking on removal. Stakes razor blades around to remove from build platform.

Cleaning the internal channels is also quite critical in this case for fluid flow - maybe less of an issue for wire insertion. Lots of flushing involved, and multiple stages to ensure final rinse with very clean IPA. It’s also important to fully dry the parts, because the heat of curing can pull stuff into the smallest constriction of the channel, blocking it and sealing it up.

This customer only looked at transparent materials because it’s helpful to inspect the channels and the process - but generally, looking at are higher accuracy materials may be helpful here.

For material choice - it of course depends on your intentions for the part and what you need it to withstand overall.

For that part I would definitely print it vertically, especially since it would allow you to avoid putting supports on the screw part.

What I would do, be aware that the height will be a little off because the starting layer thicknesses will not be precise (which is usually taken care of with the support base) so you might want to make it a little longer than you intend so that you can sand it to the appropriate length afterwards. I would also model your own support structures on to the outside to help keep the part stable as it gets taller, you can easily put some support points on areas that are easy to sand afterwards.

I printed the part last night perpendicular to the plate. No supports with the exception of internal ones. I love the finish on it. Very smooth. However the channel from the bottom (on build plate) got completely obliterated. I think I will try to do the piano wire trick since the size of an 18Gauge wire is just a hair over what I need. However (this is Tim “The Tool Man” Tailor in me) I was also considering taking a nail gun with a long 18gauge brad nail and after lining up (very precisely) just doing one pass with that. Probably not the best idea but could be fun. 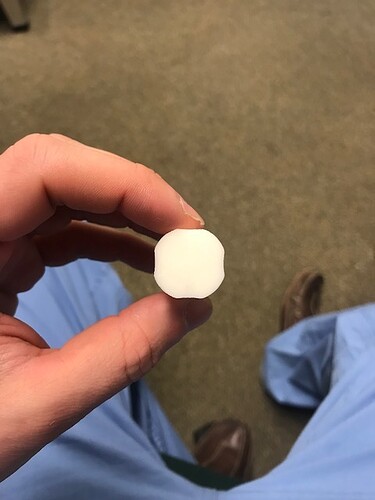 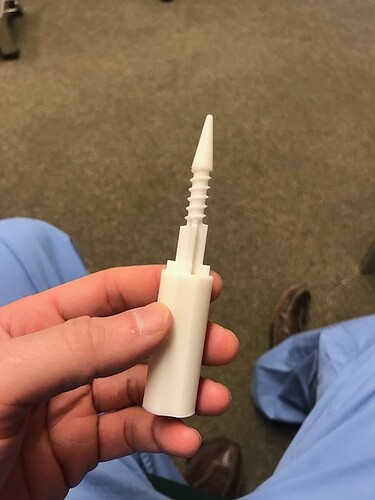 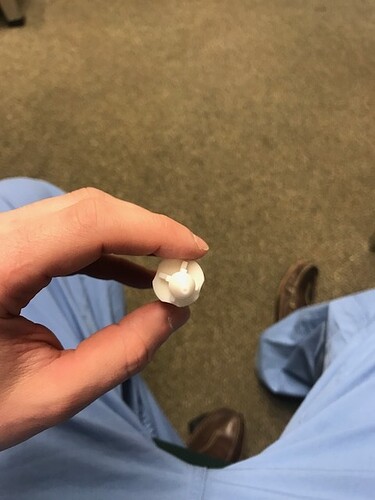 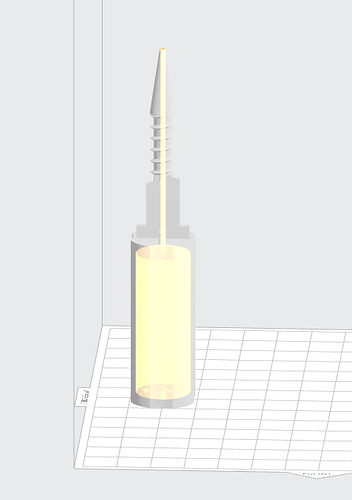 After some creative post processing thanks to everyone’s advice I was able to get the channel cleared out.

First I drilled it out with an 18gauge needle to free up the channel a bit. Then did multiple flush passes with EtOH. After doing these steps a couple times the wire seems to be passing through just fine.

Thank you for your feedback. 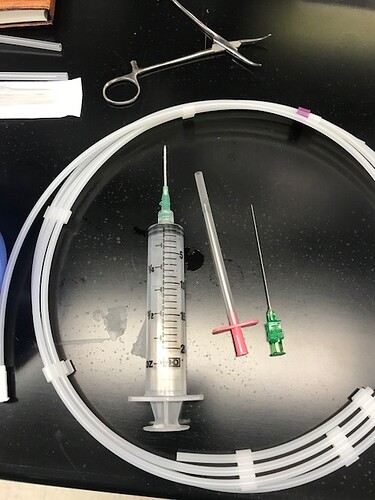 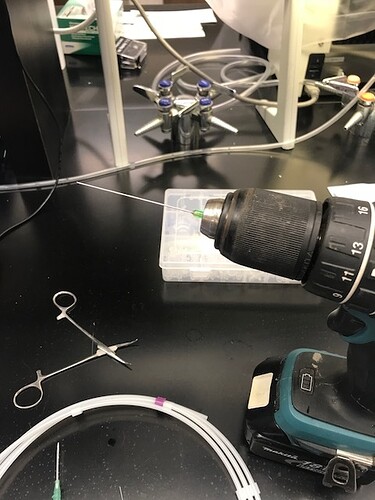 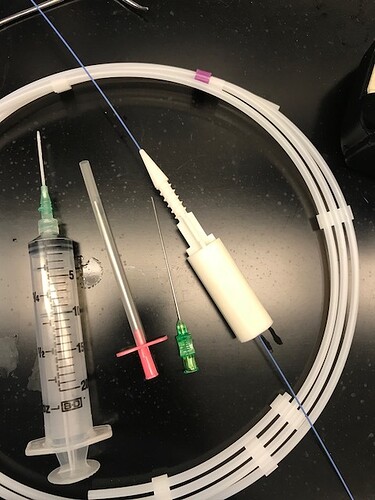 Hi, for long & thin channels where you need holes on end to be some small given diameter is working well to make the channel with variable diameter. Sure if there is internal space available. 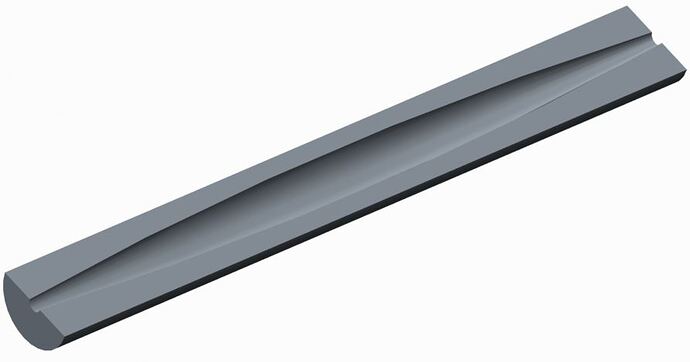 The issue for channels like that or anything where one surface is close to another is that there’s a bit of light bounce within the resin, so resin that’s around the point that the laser hits will receive some indirect light and cure a little. Small channels like that make it harder for the resin to flow off the print when it pulls the print up after each layer so the resin gets multiple exposures over time which can fill in small cavities like that.

I have printed succesfully rectangular 0.6 mm channels, which were 50 mm long. I used clear resin on Form 2, and the parts were at an angle of about 45 degrees. That small channels did not succeed always but 0.8 mm do as long as the tank is in good condition.

This makes sense - we treat the base differently to ensure it cures well to the platform so your channel would get obliterated on the first few layers. You could maybe design in some extra material that you machine off afterwards to accommodate those early layers.