This is the cad model of the chip,

Please someone help us to resolve this.

Did you print at an angle and did you flush channel with IPA? If not try printing at 45deg angle to build platform at both sides and flush fluid channel with syringe that has IPA. I often print tiny holes and usually those below 0.6mm do not print at all or print very unreliable.

Thank you for your suggestion, I was building the parts directly on the build platform to avoid doing post Processing. To get better transparency.
This time I will try to build at 45 degree angle.

And can you suggest the resolution to print 1 mm depth and 2mm wide Channels!?
For the above shown model.

I think 50um will be just right. Going smaller will produce better details (I need that in model railways) but it will also add additional layers that could clog up tiny holes. Flushing channels with IPA is a must because they will be filled with resin after printing and that resin will harden when you cure it and produce a clog. For getting a better surface finish you could try something other than IPA (monocure resinaway or something similar).

Cool idea, I may have a need for this device too. I wonder if you printed it in two halves? One flat plate and one half with the channels? You might have to design in a seal or gasket. But if it works you could take it apart to clean it.

I did some work with a Phd student over a year ago trying to achieve a similar result (very narrow channels in clear resin). We were making tubes rather than a long flat piece but had the same issues. We found that going past a certain point the resin cured in the channels, we suspect simply down to unintended exposure to the laser light.

Any chance of posting the STL file so that we could also try printing this and have a look at how it looks in preform?

That might be your best way to get help. Please confirm the total thickness of the plate and the actual size of the channels

1 file sent via WeTransfer, the simplest way to send your files around the world

If you find a way to print it, Please help us too. Thanks in advance

Thanks for uploading the file. It would be very difficult to print without supports (as it is in the file - straight off the build platform). I would suggest something like the picture below. 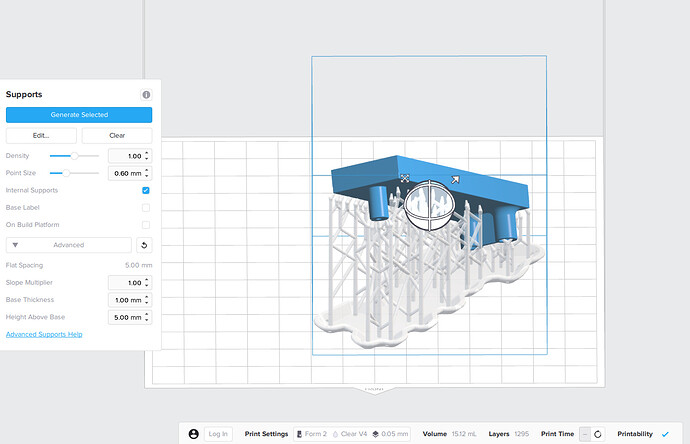 The next issue is the Version 4 clear resin - it does suffer light bleed and as such its going to be very difficult to print and keep the channels fully defined.

Most 3D printed resins display a degree of flouresence after printing when exposed to UV - will that cause any issues for you with the microfluidic application?

I am testing another brand of clear resin designed for engineering applications at present, it demonstrates significantly better resolution than Fornlabs Clear Version 4, and no problems due to light bleed.It has not yet been released to market but I’m told it will be released early next year - if you want further details PM me your email address.

We already tried building with supports similar to what you mentioned, with 50 and 100 microns, But failed with the Print. 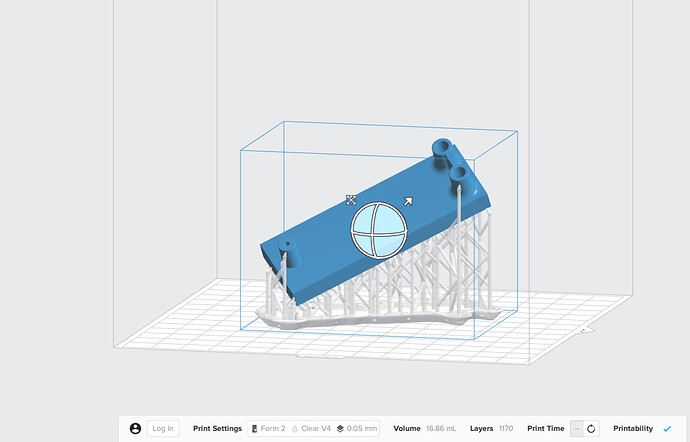 In what way did the print fail - was it simply the channels were filled? Have you any pictures of a failed print?

The part is looking fine, but the channel is totally blocked…
We tried to clean with air compressor also but didn’t work.

The one I have printed is exactly the same with Clear Version 4 - will try to print it with the new resin and see if that works.

There is a problem with the STL. It looks as if you have drawn the piece as a two-part mould and then booleaned then together. It also gives you ‘U’ shaped channels. A better way on drawing this part would be to draw the block and the channel as separate parts and subtract the channel from the block. This would ensure that there was not a dubious parting face along the channel.