Dennis - do you know how old that version 1 resin is? It’s possible the resin itself is expired.

That’s possible. I’m sure I bought this gray resin at around the time it was introduced. However, the bottle was still in its package until three weeks ago when I used it to successfully print the gray cheetah, so I’m not sure that’s the problem. Can the resin go bad from just sitting in the printer for that long? (Remember, the printer is fully covered with a light blocking cover when not in use.)

My Clear resin is even older. Could that have gone bad by now too? I’m going to try it tonight. Will let you know how that goes.

Hmm. This should teach me not to neglect our projects for so long…and I think Sienna will agree.

I’ve been reading past threads on Gray Resin v1 and it sounds like it does need to be stirred up really well before printing.

I did shake up the bottle really well three weeks ago when the prints came out successfully but the stuff currently in the tank must have separated. Actually, I could tell that it did just from looking at it, and I probably didn’t stir it well enough this time. (I was afraid I might scratch the silicone.)

Hopefully, pouring what’s in the tank into a cup and giving it a good stir will get it going again. If that fails, I’ll try cleaning the tank and pouring in a ‘fresh’ batch. (As fresh as what I have on hand anyway.)

Will let you know how it goes tonight.

So many projects, so little time!

If the resin is over a year old, it’s probably gone bad even if kept in the bottle. Stirring is definitely required so you can try that…but it’s possible the resin is to blame here even if the cheetah came out well.

Keep me posted on the results of your print!

I checked my account and it looks like I ordered the Gray v1 resin almost exactly two years ago. (I still can’t believe it’s been this long!)

Regardless of how it goes this evening, I’m going order a fresh bottle. I just need to decide if I want more Gray or if I should go back to Clear. Gray is nice because I can see the detail better for finishing but Clear looks so super cool when the laser is creating the part.

If you choose for detail, choose black

Thanks for the advice. I’ll keep that in mind.

I filtered the resin through a paint strainer into a cup, stirred it up really well, and then filtered it back into the tray. Found some gunk in there, including a very flat ‘butterfly’. Paint strainer is definitely easier and less stressful than using a comb.

Okay, it’s finished. The result is actually much better than what I was getting this weekend–the tail is a bit malformed but at lest it’s recognizable. Stirring the expired resin probably helped but it’s not going to be good enough.

On the bright side, this somewhat improved result makes me optimistic that a fresh bottle of resin should do the trick. Thanks for the advice Jory.

By the way, I ordered another bottle of Gray last night. I’d love to try Black when I get back to sculpting my own projects but for now I want to minimize the variables until we get the Form 1+ rolling again. (Plus, I do like the look of the Gray.)

Some questions about Clear and Form 1+ resins in general:

I have an unopened bottle of Clear on-hand but it’s probably even more expired than the Gray I was using. Is the shelf life for all the resins about one year? Do current resin labels have an expiration date printed on them?

I noticed that Clear can now be printed at 200mm. Does this mean Clear can be printed much faster than the other resins? If so, I might want to order more Clear for Sienna’s projects. I think getting nice results rapidly is probably more important to her than capturing tiny details. I already have a spare tray I can use for a different resin. Should I get another build platform too?

Thanks in advance for any helpful info.

I noticed that Clear can now be printed at 200mm. Does this mean Clear can be printed much faster than the other resins? If so, I might want to order more Clear for Sienna’s projects. I think getting nice results rapidly is probably more important to her than capturing tiny details.

Yes! “Draft mode” (at 200 microns) is really, really fast: in our tests, it’s faster than printing at 200 microns on consumer-level FDM machines.

Good to have you back on the forums – I’m looking forward to seeing your new projects!

I have a co-worker with a Fennec Fox. Would you be interested in selling your file so I could print it for him?

Resin shelf life is about 1 year in the bottle. Probably not necessary to get another build platform.

There have been a few iterations on the bottle label, but some do have the expiration date printed. If you are unsure, we can also check for you.

Thanks everybody! I’ll pass the word on to Sienna.

Keith, I’ll ask Sienna what she wants to do and message you privately.

Jory, thanks for the info about shelf life and labels. I’m pretty sure all the resin we have on-hand is way past expired since we’ve been away from printing for so long.

We still have one unopened bottle of Clear. I might as well give it a try but will keep my expectation low. If it only works for a short period like the expired gray did, maybe we’ll get a few good prints out of it. 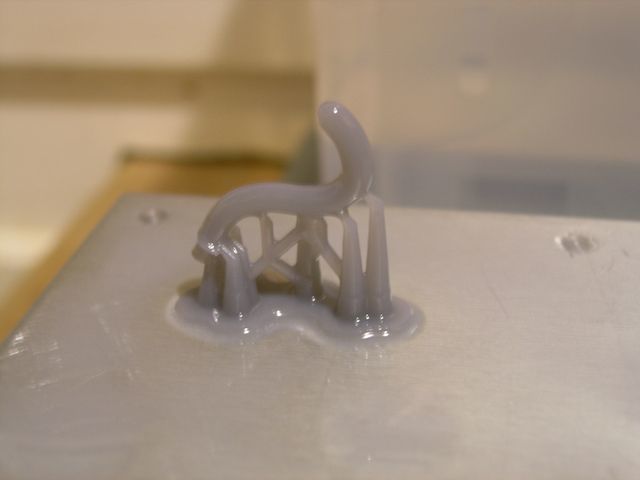 It looks perfect! The issue before must have been expired resin after all. This took about 35 minutes to print at the lowest quality setting and I’m amazed by how smooth it looks.

Printing the Fox now. According to the printer, it should take about 2 1/2 hours to finish. Fingers crossed! Will post a pic in the morning.

Here’s what we found when we woke up this morning: 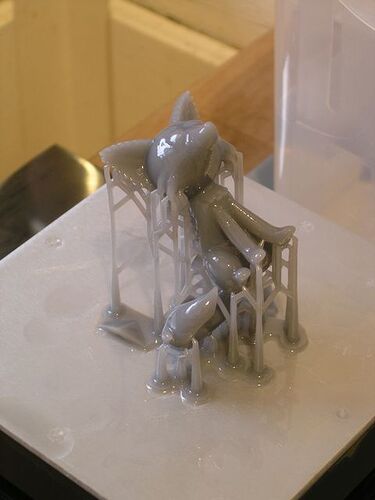 Now curing in the backyard: 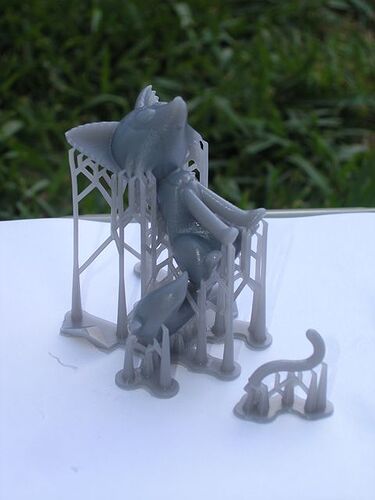 I was pleasantly surprised by how much detail came through in the process. In the 3D mesh, the mouth and the line around the muzzle are very subtle and I was almost certain these details would get lost in the physical print, but they are clearly visible! And this was printed in ‘low res’ mode.

Sometimes I’m glad to be wrong.

This is very exciting! Will post again after Sienna paints it.

I trimmed the Fox toy last night. (FYI, I like to use wire clippers and a small Xacto knife.) 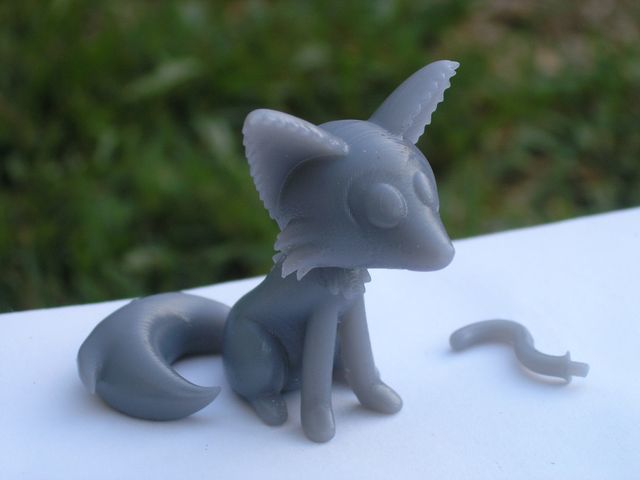 There are a few pits in the back of the head that will need to be filled. This happened with the Cheetah too. It must be harder to create a ‘spherical’ surface if there are a lot of support connections there; I’m guessing gravity may also be a factor. I used the auto-generated supports and the number of supports in the back of the head and shoulder blades area, where the back tufts are, seemed a bit excessive. The unsupported front tufts printed just fine, so for the next print test, I may try deleting some of the supports in the back.

I’ll be using Tamiya Plastic Putty White to fill the pits and extra fine sand paper to smooth it before applying the primer coat.

I guess I should have placed a coin in the picture for scale. The fox sits about 2 inches (5cm) tall.

Sienna is very pleased with it and she can’t wait to paint this.

Nothing new…it’s just two. This was a test for printing multiple copies at higher resolution. Plus the first fox’s tail got broken off so I needed to print another. (This time it was my fault.) 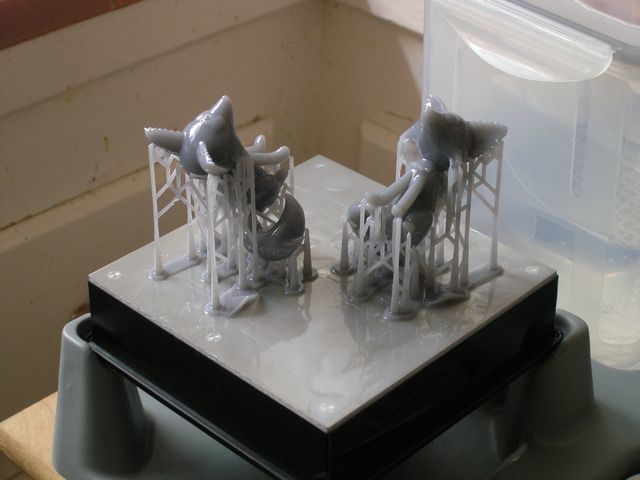 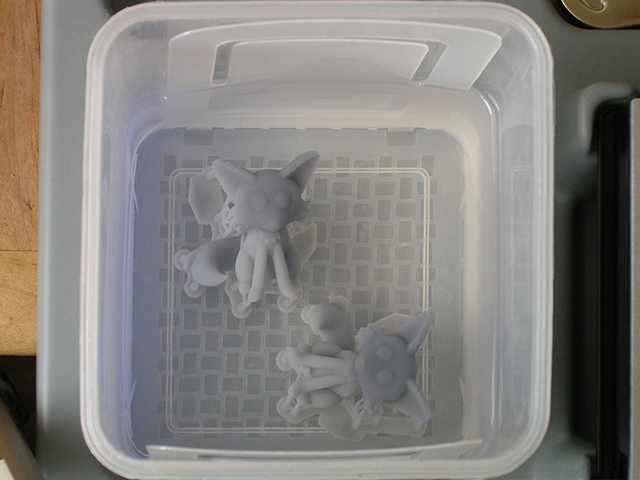 This time I set the print quality to 50 microns. Both foxes together took less than 6 hours to print. I haven’t compared the first fox’s quality (100 microns) to this latest fox yet. Will look more closely at them tonight.

When I checked on this print at around 3 am, it was about half completed. I was afraid it had failed and wondered if I should stop it. A few minutes later, I took another look with a flashlight and thought “Hmm…maybe it’s supposed to look like that.” It might sound weird but I actually had a little nightmare about the printer failing. Glad I decided to let it finish because in the morning the result looked perfectly fine.

Sienna is eager to paint it but we’ve had other projects going on these past weeks. For example, I was asked to participate in Gothober again. Gothober is a month long online Halloween art festival and it’s where we usually premiere a Brudders short or art project. I didn’t feel I had the time for it so on a whim I asked Sienna if she wanted to take over this year. An hour later, she came back with a fully illustrated 15-page book. She said this was her ‘storyboard’ for the animation. I told here we didn’t have time to animate a film. 10 minutes later, she came back with an animation test to prove me wrong. I told her it looked great but, seriously, we really, REALLY didn’t have time to animate your movie…but we can tack this test at the end as an extra. She seemed satisfied with that. Sienna also did the narration and performed the piano score. I think it’s super cute but of course I’m biased.

If you’re curious, go to Gothtober.com and click on the 10th. Enjoy!

This weekend, we’re working on an articulated bat costume for Halloween. I’ll post a pic later. Naturally, we hope to get some more 3D printing done too.

I was doing a little house-cleaning in my computer today and found some pics I completely forgot about. Here’s Sienna painting the original Cheetah ‘petshop’ she made two years ago. 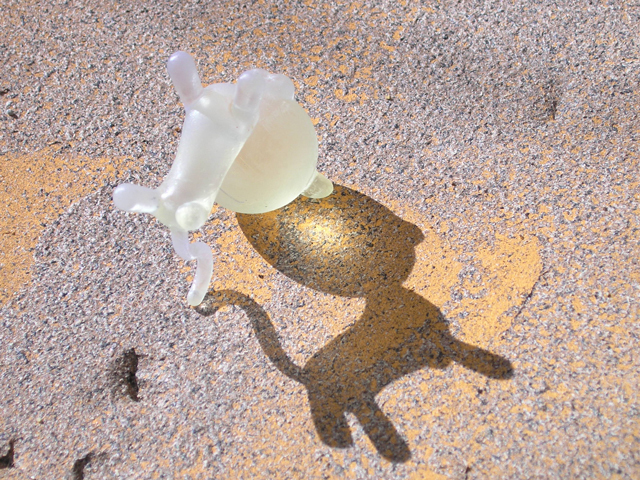 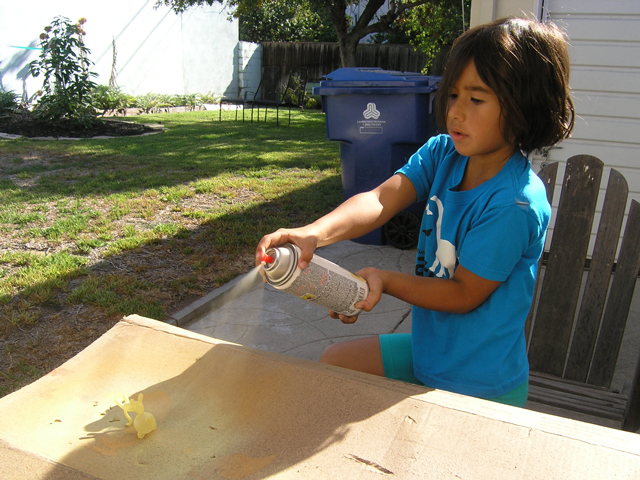 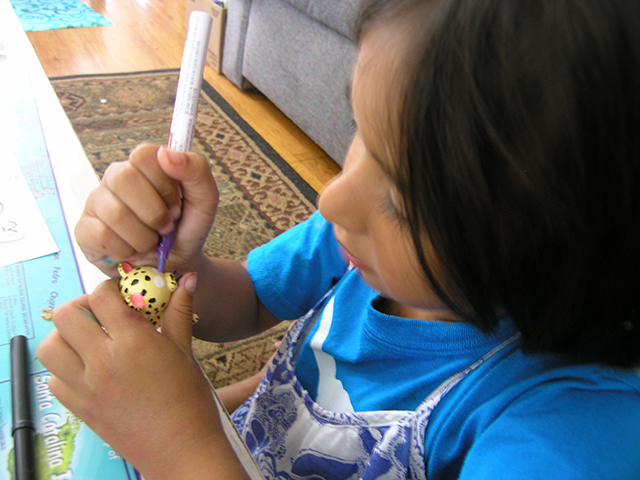 She hasn’t gotten around to painting her fox yet. Maybe next weekend.

This pic is unrelated but it’s another fun project we started this weekend. Sienna wants to make a bat costume for Halloween and we’re re-purposing wooden slats from a Venetian blind for the wings structure. 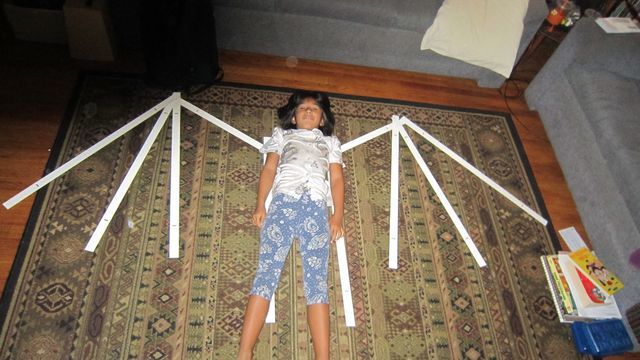 Dennis, I want a bat costume too

Thanks for keep us updated on your projects…looks like Sienna is having a great time!