Some of you may recall my six year old daughter’s excitement over our 3D printer. If you don’t, here’s the video again: Unboxing the Form 1 with Greenlaw and Sienna. (https://vimeo.com/channels/littlegreendog/69380058)

Yesterday, Sienna designed a cheetah toy and told me that our collaboration would begin today. Here are some pics from the project so far:

In LightWave Modeler, I helped her block out the figure using mainly primitives. Sienna did some of the modeling but mainly she art directed me to build what she wanted to exacting specifications. That’s okay…as a parent, I’m used to being her tool.

We opened the LightWave object (.lwo) as a voxel base in 3D Coat and, using a smoothing brush, we blended the joints. Sienna then showed me a lion ‘pet shop’ from her collection and asked me to sculpt the mouth of her toy to look like the lion’s. We also added a few details like slightly raised eyeballs and definition around the nose. When she approved the sculpture, we ran it though 3DC Autopo to get a printable mesh. Autopo did a decent job retopologizing the voxel sculpture–the mesh flow for the muzzle and ears turned out surprisingly well. The only really rough bit was the area where the front legs joined the chest–to fix it, I deleted the polys in that region and manually remeshed it mainly using the Points / Faces tool, Split Rings, Quads and the Strokes tool. I have to say, 3DC’s retopology tools are pretty sweet–we were done with retopology in less than 30 minutes.

The mesh was saved as another .lwo and opened in LW Modeler. Here we did a little bit of clean up (a couple of 2-point polygons needed to be deleted,) and we prepped it for printing using the new Repair Mesh tool in version 11.6. The mesh was then exported as an .stl file for printing. Note: for Form 1 compatibility, we set the up-axis to Z and the Export Units to mm. This brings the object into Preform with the proper orientation and scale.

Here’s Sienna’s cheetah in the Preform software. Since the Form 1’s print time is relative to the height of the, we decided to clone the object and print two. Sienna pointed out that there was enough space on the build platform for four cheetahs but I insisted that two will be enough.

And here are the cheetah toys, printed and ready for finishing. Total print time was about 3 hours for the two two-inch tall toys.

Such a cute collaboration : )

You missed the spots from the design brief Graylaw!

Thanks for the nice comments guys!

Attached is an image from this morning. For some reason the surface of the head is a little bumpy and will need special attention when sanding. Just a guess but I think these might be from resin drips running under the curved shape. If that’s the case, we might get better results using a different orientation.

Naturally Sienna is eager to start painting. We got some yellow spray paint and paint markers last night so, as soon as we clean these up, she’ll be ready to go.

The reason the head is bumpy is because it’s the “lowest” point of your model, close to the base,  and the form 1 is not capable of printing smooth spheres. Or cubes. Or triangles. Or rectangles. Or flat surfaces.

Not sure why, but it all somehow has to do with the peel mechanism and the support system.

Did you try printing it standing up instead? Then at least the imperfections would be on the bottom of the legs and maybe on the belly.

It’s really not that bad. I took a few minutes to sand the part this morning and the surface is pretty smooth now. The head has a few pits that need to be filled but that will just take a few seconds to fix–no big deal.

When I’m up and running again, I’ll try a different orientation and see if that improves the print. My concern with printing the toy the way you described is that it may be more difficult to clean up the underside between the legs than it is to clean up the larger, more accessible surface of the head and shoulder. But we’ll see.

Thanks for the suggestion. Will let you know how it goes.

I just examined the raw part again, the one that still has the supports attached, and noticed that the rump and back of the cheetah is very smooth and has no pits or bumps, even thought the curvature is similar to the head. The only difference I can see is that that surface is almost twice the distance as the head is above the base. This makes me wonder if simply raising the height of the supports would solve the problem.

I’ll report what I find when I’m able to test this.

Yikes! Has it been two years already? I’m dusting off an old topic and picking up where we left off.

Shortly after our first print, my daughter Sienna (now eight) and I had to put aside our Form 1 toy making project. The printer’s laser had gone bad, which FormLabs promptly replaced (thanks guys!) and then a bunch of ‘life stuff’ happened (not Form 1 related) and the project was put on hold for a while

Well, we’re back now. We upgraded the Form 1 to a Form 1+ last spring, and a couple of weeks ago, Sienna got back to designing a new toy. (I’m working on my own toys too.)

First, some catchup: To be sure the Form +1 is working, we reprinted Sienna’s Cheetah. We also wanted to try out the new Gray resin. Here’s the result: 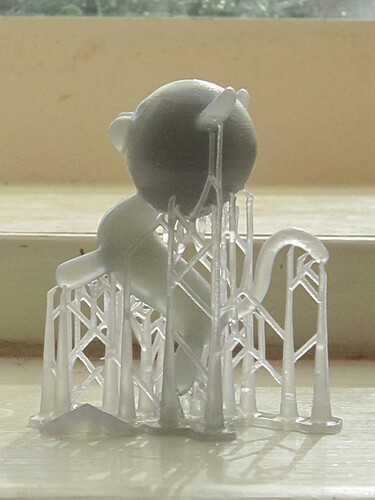 It looked beautiful! Here’s a comparison with the Clear printed two years ago: 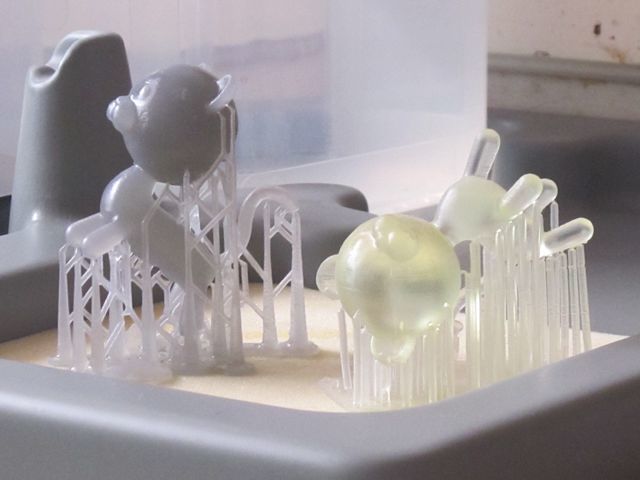 And here it is next to the original Cheetah painted by Sienna two years ago: 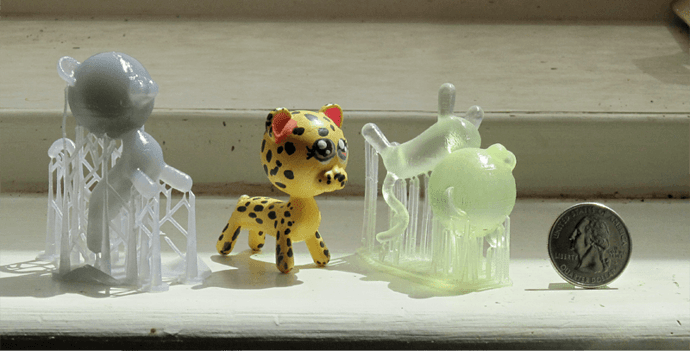 You might have noticed that the painted Cheetah’s tail go broken. I want to print a new tail so we can fix it.

To make sure our first successful print on the Form 1+ wasn’t a fluke, we tried printing two copies at once: 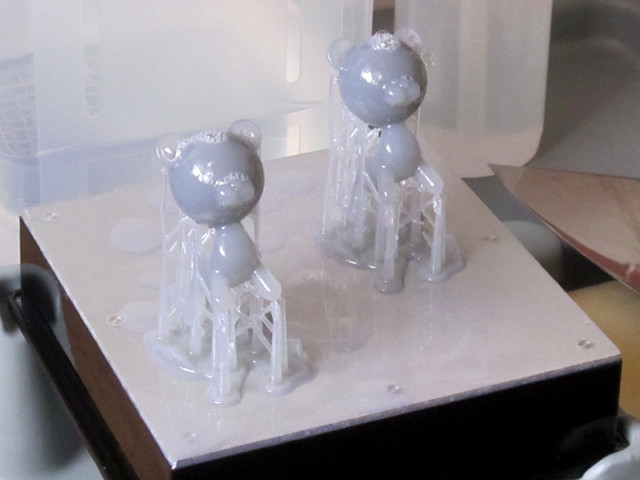 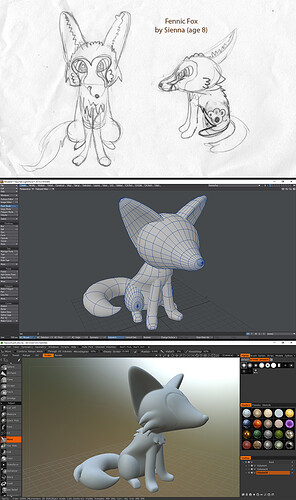 In the second panel, we blocked out the geometry in LightWave Modeler using primitive shapes, and then we brought the object into 3D-Coat for sculpting. (In my experience, 8 year olds don’t have a lot of patience so I chose the fastest prototyping methods I could think of.) Here’s a pic of the final sculpt: 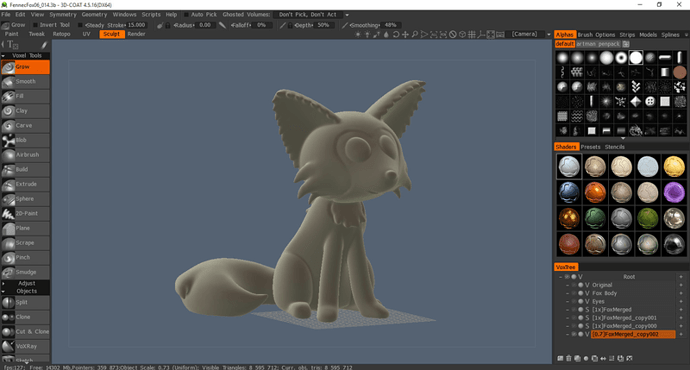 3D-Coat has a nice Autoretopology command. We drew ‘guide’ circles around the eyes and mouth and the program pretty much handled the rest. Here’s the single-mesh part back inside LightWave Modeler, where we checked it for errors and exported our .stl: 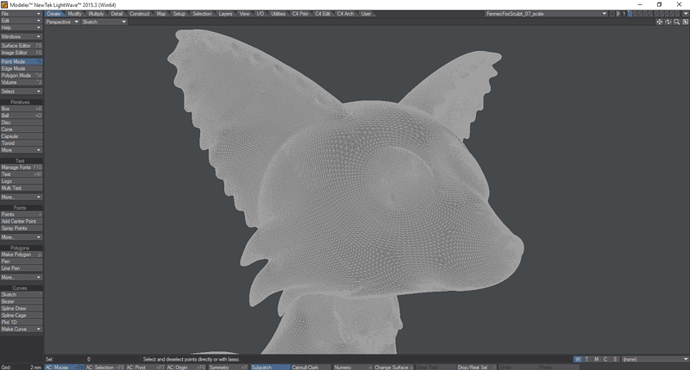 And here it is in PreForm, all ready to go. I merged the replacement Cheetah Tail in this job file too.: 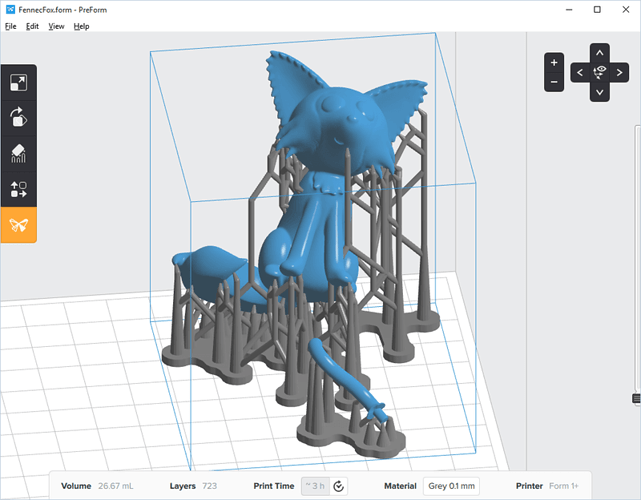 Sadly, the print failed. I’m not exactly sure what went wrong. The supports kinda printed but the Fox and Tail parts came out as goo. The mesh appears to be good visually and statistically but maybe I’m just not seeing where the problem is. I’ll take a closer look at these tonight.

I ran a second print of only the tail since it only takes about 20 - 30 minutes to print but that failed too. At least, I was able to see that the laser was still working. Oh, and the supports mostly printed again, which makes me think the issue is with the tail mesh.

Other possibilities: We had updated PreForm to version 1.9.1 just before printing. I don’t think that’s the problem but I’m thinking about regressing PreForm just to be sure. We had also upgraded the computer to Windows 10 but I think that happened a couple of weeks before our previous successful test. I don’t think that had anything to do with it though since the Form 1+ itself doesn’t depend on the computer’s operating system.

Tonight, I’m going to print a simple proven part so I can be sure the Form 1+ and PreForm 1.9.1 are working okay.

If anybody has other tips for what I should check, let me know.

I feel like I should know this already but does ‘red’ mean there is a problem with the mesh? Here’s what I found in the ‘Tail’ .stl: 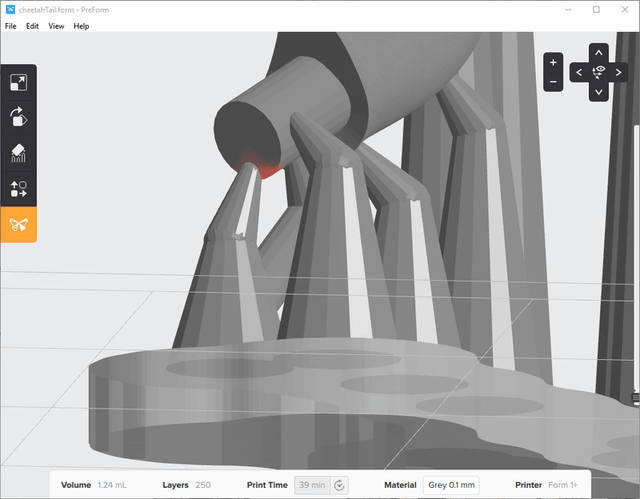 I don’t see any ‘red’ in the Fox .stl, so maybe it was just the tail that caused the failure?

I need to get ready for work now and will continue investigating this problem tonight. If anybody has suggestions for Sienna and me, please reply. Thanks!

Okay, I think I found the problem: The Fox file appears to be fine but the Cheetah Tail definitely had issues. I did a Merge Points command in Modeler and the software reported merging 39,053 vertices. Yeah, that could be a problem.

I had knocked out the tail mesh very quickly at 3 or 4 a.m. and merged it with the Fox form file assuming the mesh would be good. That’ll teach me to get some sleep first before trying to rush through a brand new part

EDIT: I re-familiarized myself with the PreForm docs this afternoon and I see that the ‘red’ region in the Tail part may indeed have something to do with the problem (unsupported overhang) but it probably wasn’t the main issue (un-welded points in the mesh). I think PreForm did try to catch and fix this but maybe it didn’t work as expected. More tonight.

Rats! I fixed the issues with the tail part and checked it over carefully in MeshLab but it still failed. So then I tried a proven part, the Form 1 Butterfly, but it failed too. In both cases, only the base and a small portion of the supports printed before it degenerated into a small stringy mess of goo.

The laser appeared to be working when I started each print, so I don’t think that’s the issue.

The gray resin that’s in the tray had been sitting inside the printer for a few weeks but I don’t think it was exposed during that time. As a matter of fact, I had made a lightproof dust cover for the printer using blackout material before pouring resin in the tray and I think it’s doing its job.

At this stage, the only thing I can think of is that maybe the resin didn’t get stirred up well enough before printing. Tonight I’ll pour the resin into a plastic cup and give it a really good stir and pour it back. If the Butterfly fails after that, I’ll try replacing the resin with a fresh batch. And if that doesn’t work, I’m going to have to assume something has gone wrong with the upgraded printer already.

I haven’t actually regressed PreForm to the earlier version yet. Maybe I’ll try that too but I really don’t think that’s the problem.

To recap: This is a recently upgraded Form 1+ and it was used for the first time about three weeks ago. The printer worked perfectly then and it successfully printed three parts (Sienna’s Cheetah in gray.) Since this past weekend, the printer seems to be failing every print., even parts that had previously printed successfully. The resin tank was combed for residue from failed prints and stirred before each printing attempt but perhaps not stirred well enough. Will try again tonight.

If anybody has an idea or suggestions for what’s going on, please reply. Thanks!

Hopefully, I won’t have to submit a ticket tomorrow.

Oh, btw, I’m using the ‘old’ Gray v1 resin. Is there any special treatment for it that I should be aware of?

I have a spare second tray so I may fill it with the original Clear tonight and give that a try.