I just received my Form2 and I can’t seem to get my resin tank in. No matter how I align the legs they wont drop in so I can push the tank forward. Are they really this difficult to get in? Should the legs not go into the holes in the rear or just the back ones? Even if I let the back legs drop in first and then get the front ones in, it still doesn’t align. Any help would be appreciated.

I also have issues with the way mine was shipped as it seems the box was already opened as there were a few times it seems the tape was reapplied. Also the guides were strewn all over the place and not even in a bag or anything? I know there is the guide online but for such an expensive machine you can’t have those quickstart/safety guides in a bag?

Got it. There really needs to be something on the online guide that says “Move the wiper mount to the left if its blocking the resin tank.” where you have the resin tank insertion instructions. I was trying not to disturb anything other than what I had to do.

I have kids, so this is why I am still only at the resin cartridge part. Anyways, you need to make your directions clearer. It says not to remove the orange tab, then it has a WARNING to not remove the rubber piece, but then it shows a picture of a ‘white’ tab (not orange), and no picture of the elusive rubber part you are not supposed to remove. Moving some text around here and more pictures would help. Things like this made me second guess myself a few times instead of having the directions be clearer. 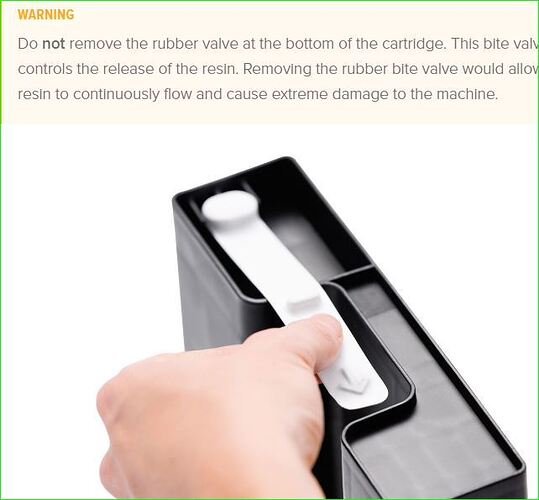 Thanks for the suggestions. Let us know if there’s anything you’re still having trouble with and our support team will be happy to help out. I’ve forwarded along your suggestions and can’t say I’ve ever seen the elusive white tabs myself.

No problem. Being a new user I just think that the online docs just need a once-over by someone who has no experience with your printers as someone experienced will ‘assume’ the little things and probably gloss over them. Thanks!