I use this printer to make cases for a product i sell so i REALLY need to get this figured out ASAP as i am falling behind on orders with every minute that passes.

All of a sudden my prints are failing with huge areas failing to print, and thin flakes of material in the tray. I am also noticing some ghosting on the tray bottom now. Mirrors look pretty clean from what i can tell, no big offending dust particles and its weird that it would print the first part fine but then get jacked up towards the end. The first batch this started happening to the defects were much smaller and at the bottom of the print where it started.

Only thing that has changed is the clear resin is version 3 now, not 2… Is this a symptom of ghosting on the tray or a more serious issue? Also any idea why i am suddenly getting thin flakes of gel in the liquid now?

The cured ones have the minor defect towards the bottom, the ones still wet on the tray have the massive defects where one entire wall failed to print along the top of the case.

On the outer most case, it looks like it tried to print the wall it but it did not fully cure, which makes me now think the globs in the bed are the other walls that failed on the print. Maybe the peel action broke the thinner wall since the tray is starting to get cloudy?

I have a new tray to try another print with, but i dont want to waste more resin until i figure out exactly what the problem is if its not the ghosting in the tray. 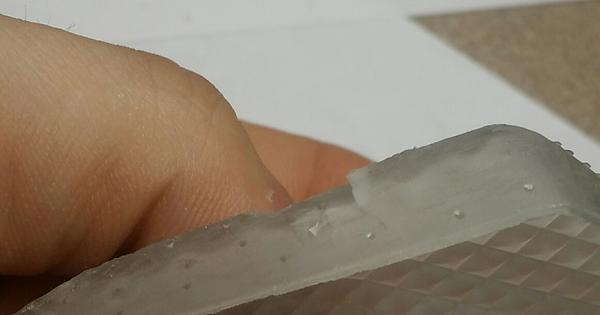 Most issues with the Form1/1+ are due to dust on the galvo mirrors, which you can only check by opening up the printer. Make sure to contact support before doing that though.

I just put a brand new tank in and fresh resin with 1 part to test, if i still get the random failures then looks like i will have to open a ticket.

Remove the tank and check the mirror (not the tank).
With the new tank is the error still happening? If yes, it could be lack of support. Try other orientation and leave the deafult settings for automatic support creation.

I know the form file is fine because i have printed it a ton of times (1 entire bottle). I just put a new tray in and i am seeing the same problem occur… ARG!!! Time to open a support ticket/…

Alright upon further inspection of the 2nd test piece using a brand new tank and resin, it appears the issues is a thin film of resin getting cured and hanging off the part. Not sure why this started happening out of the blue, but its distorting and destorying certain points of the model. Luckily with the new tank it did not destroy the model and just had some extra stuff hanging off.

That sounds like the galvo mirrors have dust on them. Dust can basically spit the laser which can cause resin to cure in separate pieces with lines on the print.

something a can of air can take care of or more a deep dive?

No. The printer needs to be taken apart. It’s not a difficult task, but you’ll need to ask FL for the instructions.

Note I had a similar problem with my Form1+, which went from working perfectly to not working at all, basically from one print to the next. Cleaning the Galvo mirrors fixed the problem completely. But I was really surprised how the printer could go from working to not working almost instantaneously. 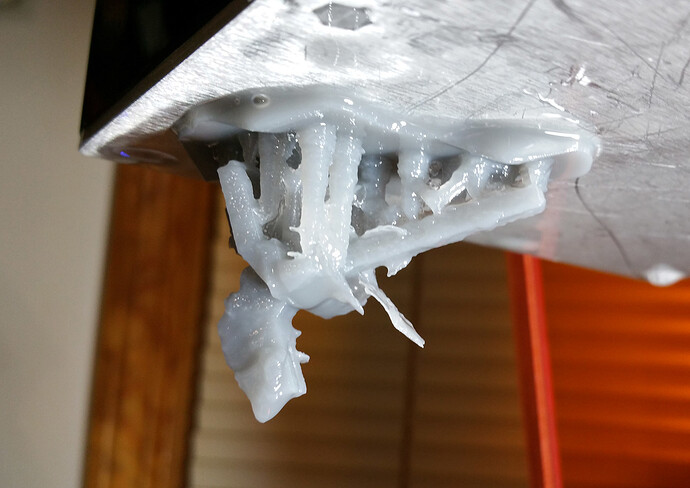 Cleaning the galvos… is that something compressed air can take care of or do you have to wipe the lenses with pec pads?

Disassembly is required to get to the Galvo block, which is on the back of the printer in the pedestal box. It’s not at all difficult, but yes, you need to take it apart so you can get in there with Pec pads on a cue-tip (how I did it).

The problem isn’t dust. Very little dust can get in to the printer unless you’re in a really dirty environment. But the printer’s optical deck isn’t sealed. And the mirrors inevitably get a build up of haze from volatile elements in the ambient air, some of which I suspect cook off the resin itself, some of which probably comes from lubricant used for the Z axis ball screw and shaft, and the rest from whatever is in the environment around the printer. Does the room where you keep your printer have a distinct smell? That’ll be made by stuff that’s slowly but surely building up on your mirrors.

I bought a Form2 in large part because the optical deck is sealed, which addresses this fundamental “weakness” (IMO) in the Form1’s design. Stuff that uses mirrors and lasers needs to be kept clean and the Form1 just isn’t designed to make that happen… thus the Form1 requires preventative/periodic maintenance to keep the glass clean.

I know you’re anxious to get back to printing – the best way forward is opening a support ticket if you haven’t already done so. The optical system is delicate, and Formlabs can give you instructions on how to clean it without risking accidental damage to your printer.

understood, i have a ticket open but when i click the link it brings me to a blank page in the ticket system and wont let me login. They instructed me to clean the main mirror and send pics. I did that and its MUCH cleaner than before, but i have a feeling the galvos may have dust on them as well. I would run another test print but i’d like to get the go ahead and instructions to check the galvos out before hand so i dont waste more materials, i have seen the teardown online there’s only a handful of screws i need to remove to get at the back panel.

For what its worth, when i clean the mirror i use a bright LED flashlight and check the mirror from all possible angle with and without light to ensure its clean. I also have never had to use a wet wipe, just a very gentle pass of a dry one was enough to pickup any light dust and left zero scratches behind.

I don’t recommend using air to try to clean the mirrors, since it can blow dust further into the printer, plus some canned air will leave a residue on the mirrors. Get the OK to go ahead to clean the galvo mirrors and that’ll probably fix the issue.

Your problem sounds like dirty mirrors to me. The same thing has happened to me and cleaning the mirrors fixed it.