PreForm 2.18.0 is a recommended update, which includes several new features and several changes that focus on improving the efficiency and versatility of support structures. Lots of amazing additions ! I just tried the “on build platform” feature and it’s a godsend ! Very happy about the Replace model feature too, this will save so much time when iterating with small designe changes.

Global supports. PreForm calculates each part’s stiffness and stability and adjusts support structures to reduce a part’s risk of flexing during printing.

Is that is a “new” functionality added to the “existing” support algorithm, or did the feature exist already and you enhanced it ?

Aren’t you afraid that this will increase part deformation ? During long Tough prints my printer often gets as hot as 37°C (room temp is 22-24°C), and we know that the fully reticulated resin already gets kinda soft at 45°C. Tough is already hard to deal with when printing parts with “low” (2-3mm) wall thickness relative to the size of the part.

The global support change is an additional factor that gets computed when automatic support generation is determining where to place supports. It generally does a better job of reducing layer shifting on long, narrow objects, but doesn’t really change anything on more compact objects.

Replace model. When a source STL or OBJ file is updated, right-click the model in PreForm, then select “Replace” to load the revised file. PreForm preserves the model size, orientation, and support configurations for minor changes to the source file.

NOOOOO WAAAAYYY !!! For me the best new feature! : ] Many Thanks

man, I really could have used that last night.

Hey guys, the new smaller rafts for rings aren’t working for me yet. Any ideas?

Apparently, the only to use these new features on a F1+ is to launch PF with F2 printer, use the features, save, close PF and reopen using F1+ and open saved file, send to printer.

Yes, I would love this feature as well!

Same here… Anyone could help?

I just updated the software and the firmware on the Form2 and now my printer hangs when it tries to print. Any ideas?

How do you get the new ring rafts to appear?

I know I do Bitch a Fair amount but I also have to give Kudos when they are due… This changes in 2.18 are very nice… I LOVE the replace function… This is already saving me bunches of time as add support Raft/sprues to my parts so this lets me update the part without having to apply all new supports… THANK YOU…

Now just get us a Mirror part function and you will be real HEROS (This would be a great option !!)

Hey how about that Adaptive layer thickness that has been MIA !!! 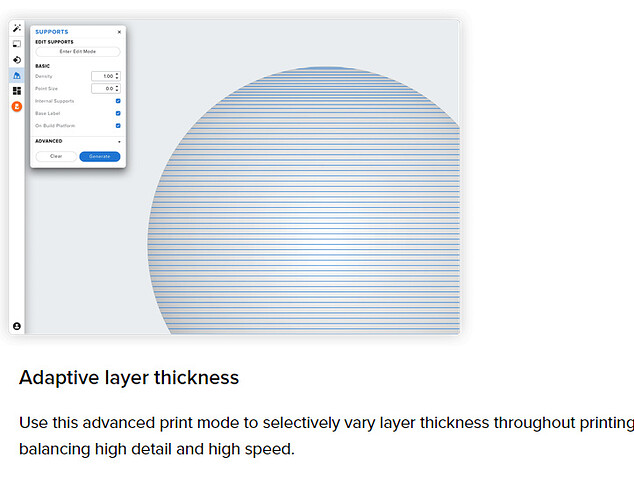 That’s the one I’m waiting for.