This was posted earlier and closed (hopefully because it is being implemented).

It would be great to get to manually trigger the resin tank preheating. Setting up prints in preform takes about 2 minutes and then you have to wait up to an hour for the tank to preheat before seeing any action. On-board or via preform (or even dashboard?) would be useful for me

It does not make you look very cool when you are showing the printer off to people who paid for it.

My tank takes about 5-10 minutes to heat up, not an hour. Does yours really take an hour?

I agree that this would be a great feature. My printer does take 30-45 minutes to preheat then auto start.
I would like to see this in a firmware release

30-45 mins seems very long. Are your printers in an extremely cold basement or garage or something? Mine just took 7 minutes to heat up.

I was going to suggest the preheat or preheat and fill options as it is sorely needed! Kind of disappointed that it’s already been suggested 3 months ago and not implemented.

Formlabs, please add some way to prefill and preheat before starting a print, either remotely through Preform, or directly on the printer itself.

agree, an extremely easy thing to implement in the preform software.

Usually it takes less than 5 minutes for me. Having this future would still be useful for me though.

I don’t think a pre-heater switch in Preform would be particularly useful, if like mine, the machine takes 30-45 minutes to warm up. I’ve also noticed that builds can take an hour or more than the estimate in Preform. This, I guess, is because the machine is pausing to warm the resin during the build. The machine is in an unheated room.

It takes me around 30 minutes for a 16 degree Celsius room to heat the resin to 31 degree. The pre-heat would be extremely helpful!

I’d be perfectly fine with a few dollars/day of electricity to keep the resin tank “warm” when the printer is powered but not printing. Wouldn’t need to keep it at 31ºC, something less than that but at least “near” would speed up the preheat time for you guys in a cold environment. Also, thermal cycles can be murder on mechanical and electrical components. It sometimes proves to be more reliable to keep something warm even though it’s idle, than to let it cool to a low ambient and then have to heat up again to begin operation…

I’d like to add a vote in favor of this. Something as simple as a button in Preform that says “start warming resin tank” would be great. I generally spend a few minutes orienting objects and building supports for them, and there’s no reason not to have the tank warming during this time.

Posted a new feature request, found out the was a 4 month old tread about it.

@Formlabs, this is a very serious problem. Having to wait eternities before finally hearing the machine working is killing many of us. Please implement the “Maintain temperature to 29C” option" before the winter Solstice. 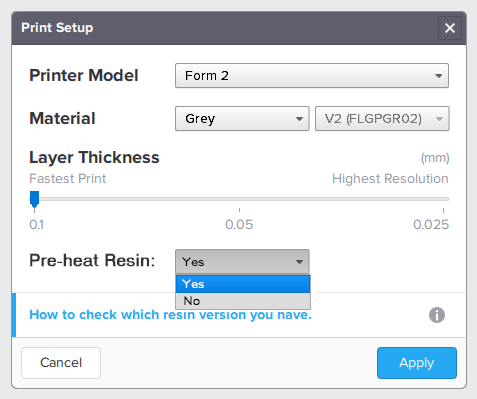 Another implementation option could be that when you turn on printer, ask inmediately if you want to start pre-heat.
Having a switch in the settings of the machine like Pre-Heat-Turn-ON = true/false
If you don’t click any button in x seconds, it will automatically start it or pass depends on that switch.

My printer is only two weeks old and i also have a 20 to 40min warn up time. Office area is 68 to 70 degree F. I would be for a preheat feature so when i come in the office I can turn it on and the printer would be ready to print when i send the file over.

I use my printer in a 14 degrees C (57F) room and it takes no more than 20 mins. It takes longer, about 35 mins, when I have a Tough resin in the tank. Anyway, the suggested option of preheating would be quite helpful.

The Form 2 already starts pre-heating resin when you’re performing certain actions, although opening PreForm isn’t one of them. See here :

IMHO it’s a good thing, even though some times I would like the pre-heat to start when I open Preform, oftentimes I only open preform to prepare files or to plan orientation/supports on an in-development file and I’m sure the printer would pre-heat in vain more often than not.

Now, a button in the “printers” screen in Preform that could start the pre-heating in a specific printer.

Just wondering why Automatic Printing Temp. for Tough resin is 30C in the link you sent. My printer heats to 35C before it starts printing. Has this changed recently?

Has this changed recently?