I’m now having another problem, which I don’t remember seeing before.
On the vertical, or near vertical surfaces facing the right side (peel motor side ) of the tank have pitting on them. Sometimes the pitting is minor, at other times, it can be pretty heavy. The opposite side is clean

It really doesn’t matter where on the platform the objects are, Here is what it looks like. On the left the surface facing the peel motor, on the right, the opposite side.

BTW, I usually don’t see this issue, probably because I generally orient my models at an angle, but in this particular case, I printed everything directly on the print surface, and there are a lot of vertical surfaces. Here is the platform layout 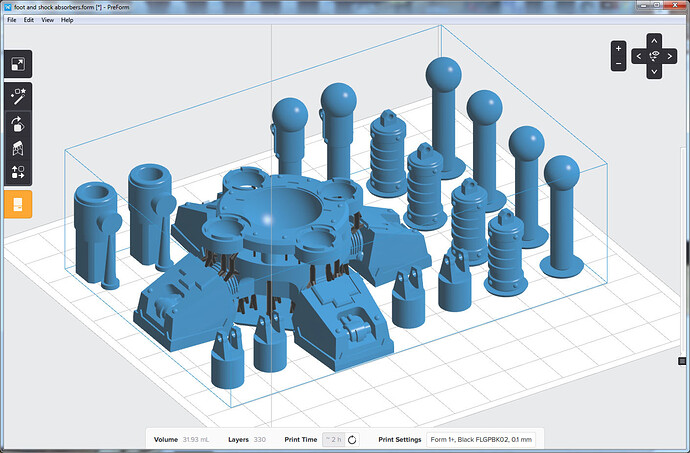 I have seen surfaces like that before but never really figured out why it happened. Could you spin it 30 or 45 degrees (Z) to get the peel to start at the edges of the feet? It may help.

There’s something wrong, and I’m not sure what.

I tried printing some of the small parts on another ares of the platform, closer to the left side (hinge side), and here is what the surface looks like. Again, this is the side that faces the peel motor (right). 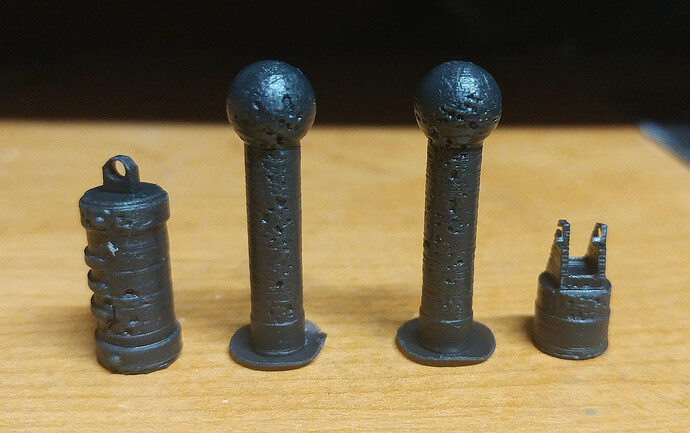 But look how nice the first 5mm or so look. This is very similar to what’s happening when I print @ 0.05mm. The difference is the print completes, but the surface quality is bad.

I’ve never had these problems before I got this black resin. Thank god I’m done with it. I should be receiving my bottle of grey Tuesday, and hopefully all this will be behind me.

That is odd. I wonder if you print the famous butterflies it the supports will look like they did before you replaced the power supply. I think the first 5mm looks good because of the over exposure.

I wonder what your laser spot looks like. I doubt it has anything to do with it but it could.

I would also add these pics to your ticket. Hopefully FL has an answer.

It looks like you’ve been in touch with Nicole from our support team. This looks like it might be an optical issue and support will be best suited to troubleshoot with you. I’ve forwarded this to her and we’ll be in touch.

Ive been in contact with FormLabs support for the better part of December and January. The problem I’m having is not only pitting, although this seems to have cropped up since I bought the bottle of black resin, which basically got me started down this slippery slope, but I’m also having problem printing at finer layer layer resolution.

Originally the problem came up the first time I tried to print something at 0.05mm, and it failed, At the request of Support I opened up a support ticket, and did as requested, printing the butterfly tests, cleaning the mirrors, cleaning the tank, more mirror cleaning, etc. A week or so ago, I ran out of the black resin, and bought a brand new bottle of Grey V3 resin, hoping that my problems would go away. Armed with the new resin and a new tank, I tried printing the butterfly tests as request by FormLabs Support. The 2 back butterflys (Near the hinge) came out OK (more or less), but the 2 up front, failed. I also tried printing a “normal” print at .1mm but that had a section that failed as well.

I sent all my findings to Support, only to get an email today, that basically states that ll possible troubleshooting has been exhausted and the next step is to sent the machine in for repairs. Since it’s out of warranty, the repair costs are $800.

I mean it could be something as simple as an adjustment, and for that they’re going to charge me a flat fee of $800. The Mercedes dealership service doesn’t charge me flat fees like that.

Suffice it to say, putting up that kind of money is out of the question. I’ll see if there’s anything else I can do myself, if not, I’ll just chuck it and go back to my FDM printer. At least I know how to fix that, and if need be I can rebuild it from the ground up for less than $400.