Models built in ZBrush and exported as STL. All polys combined are under 1 million.

Import into PreForm as typical, auto repair promted but went quick. Orientation was difficult but eliminated all minima errors (<15) and cupping (auto-orient would place models with cupping warnings, manual reorientation and adding supports manually got rid of the errors.

Portions of the prints look fine but others have a “furry” or “flecking” appearance. 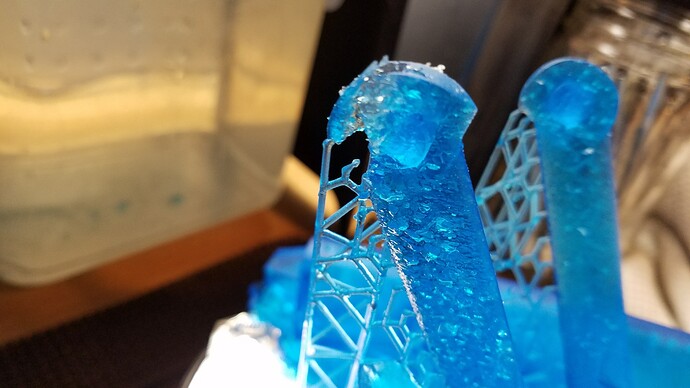 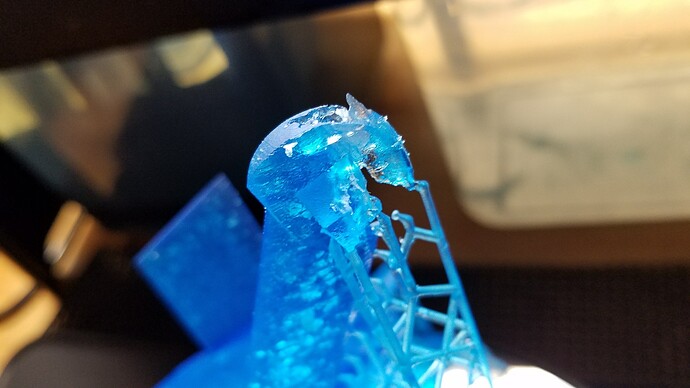 Others are missing chunks. 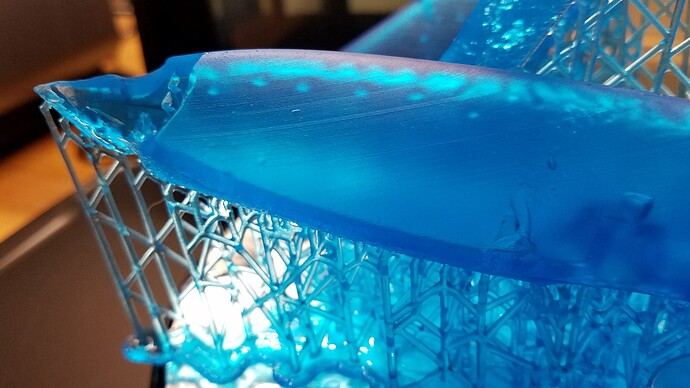 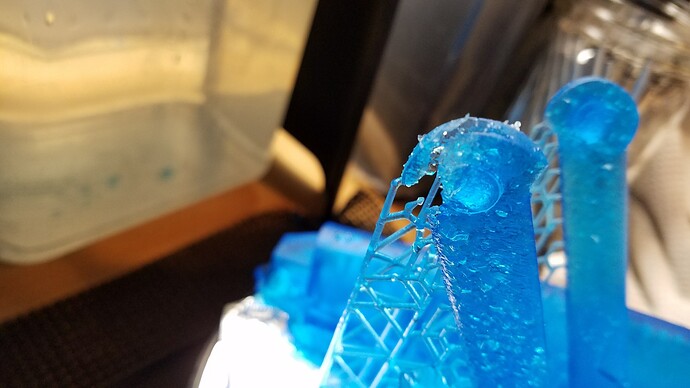 Removal of parts from plate was VERY difficult…rafts were sticking like glue. Drain holes are on both ends of the hollowed item. The rest are solid. I did not screen the resin after this print, I did visually inspect the tank/resin and there were no chunks or other particles in it.

I had a previous issue with air bubbles between inner/outer walls and it turned out to be dirty glass and modeling the walls too thin - not an issue with this one. The chunks missing on this latest print is a scary first.

Tank was used previously though 80% of a cartridge of TR04. Swapped out the previous bottle for a new bottle of TR04 since I needed more resin volume for this bigger print.

Printing another model with the same tank, resin, plate to see if it prints as good as the print before this fail. Want to see if its the model (I am not perfect) or the printer.

The build plate (z-axis movement?) makes a random binding sound (sorta like stomping on brakes in a car) when It is lowering and raising between layers but it is random, not when the laser is printing to the plate. It has not affected previous prints and has not gotten louder or more often.

If I had one request it would be an option to disable auto detection of the minima and cupping errors. Importing multiple pieces means lots of CPU being ate up to tell me I have unsupported areas when I haven’t even added supports yet. I am trying to auto orient the models and I am getting error warnings. Also, auto-orient positions models with cupping and warnings, manually flipping the end up IAW FormLabs support page and the cupping warning goes away.

Any help is GREATLY appreciated.

Also, one other item. The room did have a few hours of cool air (~55-60F) due to being an old fart and forgetting I left an exhaust flue open after I used my airbrush booth.

Also, the resin tank of TR04 sat in a sealed box for about two weeks before I pulled it out of the box and successfully printed a set of parts. After that good print I uploaded this bigger model, switched to an “new” bottle of TR04, and let her print.

Again, your patience is appreciated.

Did another print. Room was at normal temp (70F). Similar issues: poor finish, especially on the side facing the build plate (grainy texture, air bubbles/blistering between walls). Some prints are missing small areas about half way up the print then the rest of the print looks fine. Some parts are covered in grainy surface others are clean. The tank has some ghosted areas but they aren’t very opaque. I filtered the resin out of the tank but because of the TR04’s viscosity I couldn’t totally empty the tank and am now paranoid that the issues will reoccur unless I go to a new tank. That sucks because the tank I was using has less than a liter of resin use. I am at a standstill. Shop/store is shutdown since I can’t get a good print. Arrgghh.

Have you tried filtering your resin ? From my experience, with Tough when there are flakes / bits of delaminated layers in the tank you will likely not see them because the light just passes right through the parts and isn’t perturbed by the solid bits in the middle of the liquid resin.

Yes I filtered thr resin I could get out of the tank. There is still some in the tank. Is it ok to reuse the tank or am I going to have to trash it and use a new one?

Unless the surface of the tank is damaged, it can be reused. Just be sure any debris is removed.

Understood. How do i “make sure that the debris is removed?” What are the steps i can do without damaging the tank? I followed the steps in the F2 support area (scraper and filtering resin) however I couldn’t get all the tough resin out of the tank. It is pretty thick. If the pieces causing the failures are so small and clear, how does one get ALL the resin out of the tank without “washing” out the tank?

My process is usually to filtering as much resin through a filter as I can and then lay the tank flat and gently remove the rest with the scraper tool. From there, I usually use a paper towel to remove any resin from the orange acrylic making sure not to contact the clear PDMS.

This doesn’t look like a firmware issue and could be caused by a few different things. Let us know how your print goes after filtering the tank. Are you running the latest PreForm version? That will help to detect local minima and unsupported areas which could also cause this.

I am using current firmware and preform versions. My titling was based on other posts that looked the same results and the users attributed it to the latest fw. Appreciate everyone’s help.

Whelp…just when I thought it couldn’t get any worse.

Did a small test print after all the helpful pointers. The test seemed to work so I pressed with a full job. I reoriented som of the parts more vertical since some of the parts in prior prints had surfaces parallel with the tank and were thin and not printing.

30 hours later I pull the build plate to these… 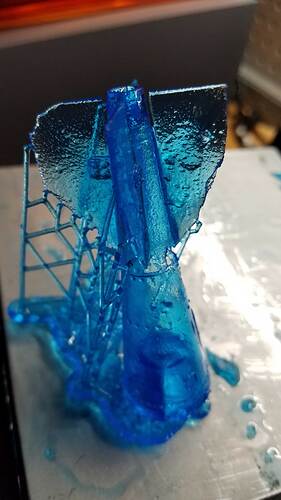 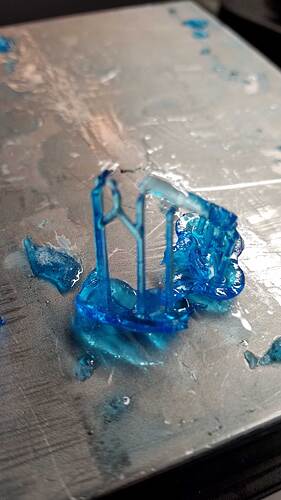 While chiseling a dozen failed parts off the build plate - all of my failed prints are a $@%# to get off the plate, if they are semi-good prints they pop right off - I rediscovered… 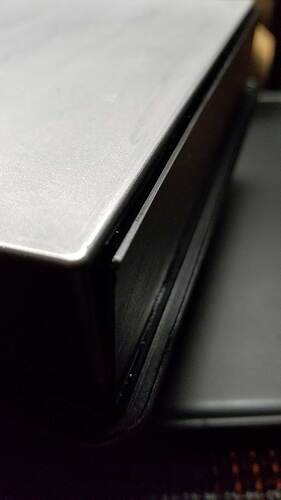 I saw this gap when I received the plate but didn’t think anything of it…until the last print when resin was weeping out of the space when I flipped it over.

Could this have ANY effect on my prints? Seriously. I know that sounds like a stupid question but I have to believe that I haven’t burned two tanks, multiple prints and a hundred hours because of badly built plate.

The prints I am doing were done dozens of times in previous verions of PreForm (2.11, 2.12, 2.13.1, etc.) and older firmware versions (those prior to the sped up printing “improvement”).

I reverted back to PF2.13.1 and FW 1.14.21 and swapped out my build tank for a brand new one and recleaned the glass over the mirror IAW FL’s instructions. I cleaned off the plate, sanded it with 600 grit and cleaned it fully with IPA.

I am retesting this one last time. I am out of build plates, tanks and using my last cartridge of TR.

I am out of ideas.

I just had this problem recently too, actually. Tough V4. Tried the same fixes with no effect–each time the resin would solidify in coin-sized spots on the bottom of the tank, “melting” my models. I had to watch it close for several builds.

My build platform was well and scratched, and I thought the nicks and scratches might be affecting surface adhesion of the various layers. So I bought a new platform, new tank, and new cartridge of Tough V5. It fixed the problem for me. Expensive fix, but the printer works like new again. I actually think the build platform was the issue, combined with a bit of particles in the resin that I couldn’t see.

This was a brand new plate, I think less than a dozen jobs!

All my problems began after the recent firmware and PreForm upgrades. I have semi-good parts in with the bad parts where support tips are free of the parts by millimeters. The edges separated from the tips look like they were designed for Batman. My tip sizes have been .8 to the 1.0 default.

If the part prints good it pops off the plate. If the part has any defects it is stuck to the plate like glue, regardless of it position on the plate. The base of a bad part are brittle and shatter when I try to pop them off the plate. My recent job is 11 pieces ranging from moderately big to tiny. They have all been printed before. Within the 11 pieces 7 pieces print fine and pop off the plate with no effort. The other parts with defects are glued to the plate and have brittle bases. ;/

I am going to get told to try reorienting. I have autooriented these and manually oriented. I have 0 minima, zero cups and the parts were oriented with the peel direction.

Prior to this recent events this very design has been printed 20-30 times, two sets at a time, 11 pieces per set. When I went to the faster printing firmware and the versions of PreForm with collision detection then things seriously began going south.

I have wasted almost two full cartridges of TR, two build plates, and three tanks. I have filtered resin three times. I have cleaned my glass three times. I’d say this is already expensive without having to replace everything but the printer.

I think I understand how to print with this printer. I have had it for 17 months and printed thousands of parts.

There is something else wrong.

Try using old Preform and see if it fixes it