Marks on bottom of resin tray

I’m noticing some scuffing on the underside of one of my resin trays. It is most pronounced at the sides but some in across the tray as well.

This tray has had resin in it for 17 days (standard black) and has been used for 200 hours of printing. 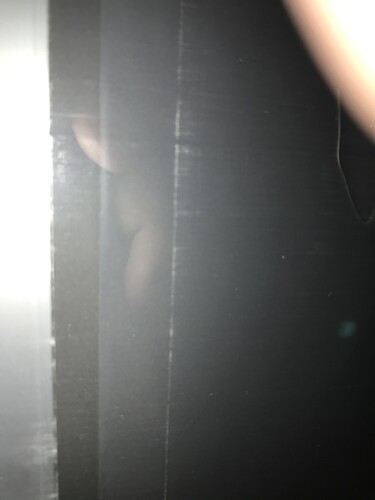 The tank only shows that 30% of its lifetime has been used, is this a defect?

I have the same marks on mine, and have about 130 hours of printing.

I just gave it a clean with a pec pad and some IPA. I wonder if the rails that touch the film (on the LPU) need to be cleaned as well, but I gave that a wipe as well, and there was a thin layer of dirt (or something) on it.

If the environment is dusty you need to put the printer in a cabinet - otherwise small particle can fall into the resin and cause excessive wear out of the film. Also cabinet will protect the printer from direct daylight and prolong the resin life - even if under protective cover, some UV penetrates and semi-cures (sensibilises) the resin.

Yeah I cleaned off the bottom of the tank with a pec pad as well and clean ipa.

I did also look at the LPU, and the same white material was on the rollers. It came clean very easily with a dry pec pad.

I’m not sure where it is coming from though, but I’ll keep an eye on it and post if I find out anything more.

In my experience there are a few things it could be:

(1) Resin on the underside of the tank, getting cured and turning to powder.

I have noticed some problems on the rollers of our machines.

First I noticed that some supports failed to build and compromised the part integrity. Prints continued to degrade, and then I was forced to clean the tank using a printing mesh.

Then we noticed the bottom of the tanks had marks / scratches where the rollers would run. Had a look at the rollers, they needed cleaning. Did this on the first Form 3 by entering Replace LPU mode under settings => maintenance.

Second Form 3 continued to print, but with increasing noise and vibrations (sorry, but it sounds like a bad stomach growling). This one is still printing right now, but I will have to do more cleaning of the rollers, which seem to have built up loads of friction due to resin being around them.

On the third, Form 3B, we had black Flex V2 resin residue on the bottom of the tank, which was very hard to remove. It also followed the same pattern as the first tank with horizontal lines. Once I tried to clean the LPU rollers, I discovered that some of them were stuck! Turns out the Flex V2 resin was blocking the rollers from moving, and that it is able to get underneath the roller itself. This cleaning is a longer process if you choose not to disassemble the LPU. I had to use several several IPA wipes to clear, then rotate, then clean, rotate, clean, repeat combinations… Seems clean now.

I do not have any leaky tanks, but the resin has found ways to get to the LPU rollers… Now I have a batch of Rigid 4K parts running on all 3 machines.

Will share if the marks, residue, and / or vibrations start up again.

You can take the roller-holder off the LPU. Once it’s off, you can dissassemble it and take the individual rollers out to clean them. Much easier than the clean-rotate cycle.

The only downside to this is when you put it back on you have to be pretty sensitive to the required torques.

I’ve also had dust on the underside of the roller-holder. Taking it off makes it easy to clean.