Losing detail in one section of the model

The lower left section of my model is losing resolution. All other quadrants of the model are perfectly good. I’ve printed this model two times now. First time I thought the low resolution was do to the supports crossing over and muddying up section of the model. But after the second print I can see that it’s not the case. The drop in detail extends to the whole quadrant including areas where there were no supports.

It’s hard to get a good picture because the detail is very fine. But here’s a screen shot form Preform to show the area. Overall dimension is slightly thinner in the low resolution area. 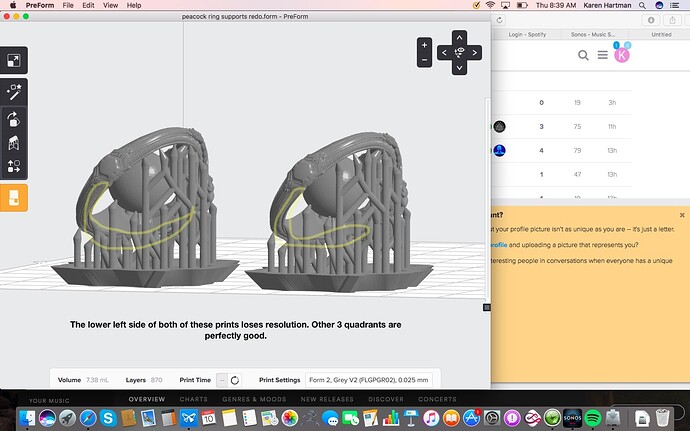 I have checked the tank and mirrors but I don’t think that’s the problem because it is happening in the same area on both models.

Do I need to change the orientation of the model?

Post a photo of the two areas on an actual print. This is likely an issue that will be fixed with orientation.

First the bad side 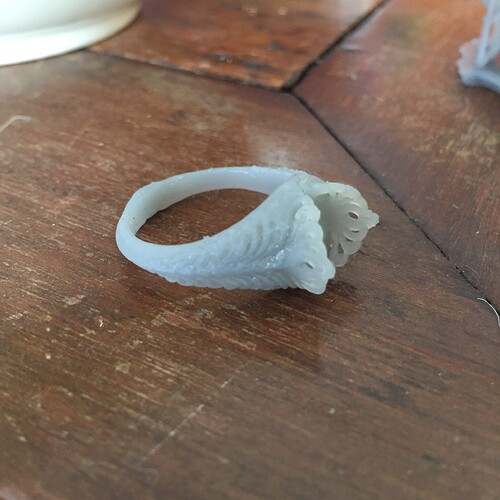 This is the good side 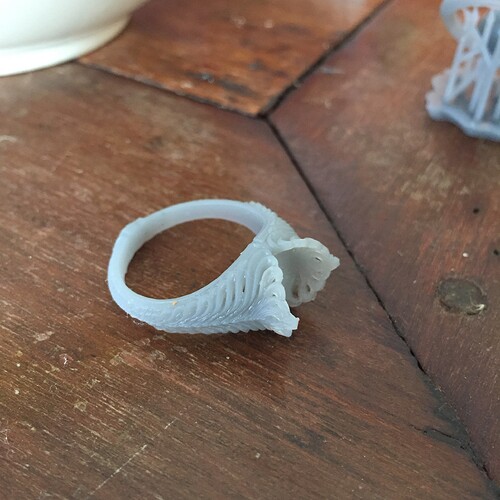 I’m about to check the printer with the Form 2 test file.

Any downward facing surfaces will not be as sharp, this is due to the laser projecting from the other side and curing resin that is stuck on the underside of the print. This is the biggest problem with SLA printers due to how the print is submerged in the resin.
There’s some potential ways that the effect can be reduced but nothing that can be done with the Form2 other than avoid having downward facing details.
For your case, I would have the edge opposite where the jewel goes as the bottom point.

Would it be possible to split the model and print it in 2 pieces? Then just use resin to cure them together. It is obviously not the desired method but it may be necessary with all the detail in the model.

Yes that may ultimately be the solution. But I’m going to first try Randy’s suggestion and rotate the print. I just recently got my printer so this is all part of learning how to maximize it’s potential. Thanks guys.

Position it so the setting side of the ring is towards the build platform. That’ll make the “bottom” of the print the underside of the ring where I assume you do not need a lot of detail… And try completely vertical, no angle.

You will need to make the support point size smaller probably.

Steeper angles will help on resolution but then you may have to print at a finer resolution. When I print medallions and coins I do the fronts and backs separately with the dead side having the supports. Small and thin parts are really easy to mend together using raw resin and a 405nm laser pointer.

I don’t see any area you could split it without having an issue trying to put them back together, since there’s so much detail if you split where there’s detail then it will be extremely difficult to fill and sand the seam.

By ‘downward facing’ do you mean facing the resin tray or facing the build platform? Sorry, just want to be sure I understand.

Yes. “Downward” is towards the bottom of the resin tank.

No, downward towards the build platform. The laser goes through the currently printing layer and out the underside of the print where the supports are and cures extra resin there. The effect will be the worst with Clear resin since it can’t stop the laser much.

Thanks for all of the suggestions. Ultimately with this amount of fine detail, I will either go to a solidscape or adjust the design a little so it can be printed in halves.

That being said, this was a really good thing for me to look at because it allowed me to see the limits of the printer and understand how it works. I was printing at 25 but even so due to the steep inclusions of detail, no matter which way you turn the design you end up with details that become “islands” when they are sliced. If the islands do not have supports they fall off. So while the whole print doesn’t fail, the unsupported island do not get fused with the rest of the print. This is what was creating the area of low detail.

Just for sake of learning, I used the level slice tool to the right side of the Preform window and tried to manually add supports to these islands. I tried various orientations. I used the smallest support size. I printed the “best” version and it came out rock solid. But because there were so many supports, I obliterated the detail of my print. I kinda expected this but I just wanted to see for myself.

For the sake of the other newbies on this forum, I’m pasting in the Formlab’s Support response. It was quite helpful.

I appreciate the Dropbox link; I grabbed your .form file and took a look. The ring is very intricate and beautiful, and you’ll be happy to hear I think I’ve discovered the source of the roughness on the underside.

I hadn’t quite realized the scale from your photo. The details and textures of the surface are very small—so small that many of the tinier features are around the minimum size the Form 2 can effectively print. As the upper side of your model shows, the printer can still create those features beautifully. However, it’s very difficult to attach supports effectively to such an intricate surface. On the underside, many of the finer features of the part are unsupported—as they print, the outside tips and ridgelines print in layers before the main body of the ring starts, and on many parts of the underside there’s nothing holding those details up. I attached some images showing what I mean.

It’s not easy to remedy this situation. You’ve already noticed that placing supports on features like this, which are smaller than the support point, obliterates them—but if they’re hanging below the body of the part and not supported, then they won’t be able to print in the first place. Unsupported sections will be created in the tank, but without anything to peel them off they’ll just stay stuck there and get brushed away by the wiper. (You may still have some cured particles in your resin tank; I’d consider filtering the resin so that these don’t disrupt a future print.)

I think your best bet is to re-orient the ring so that the setting is at the highest point. I’m afraid the underside of the part will still tend to lose any of these very very small raised features, but you can point the least-crucial section of your part towards the underside. 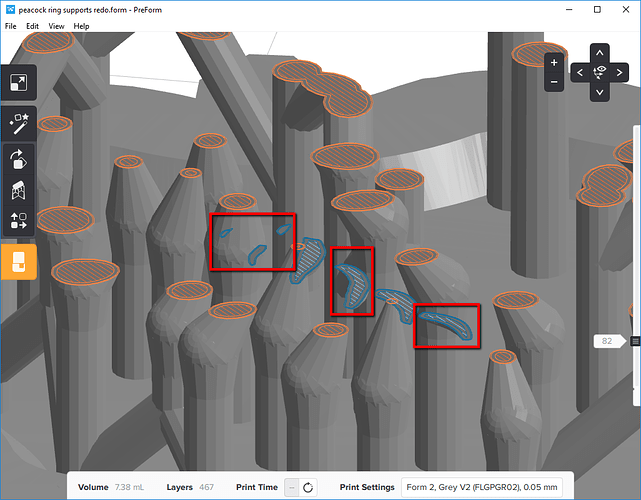 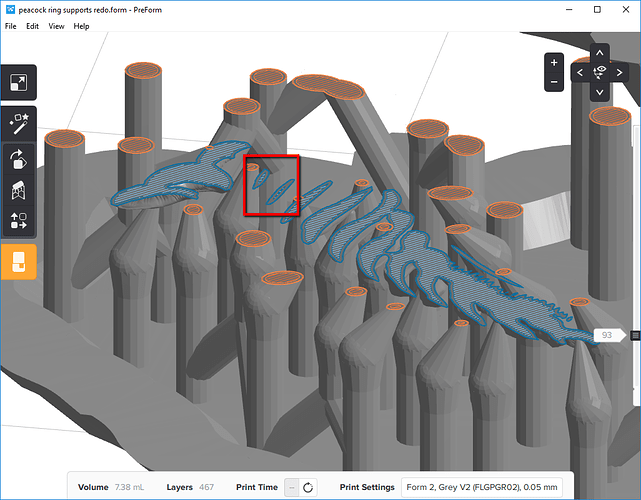 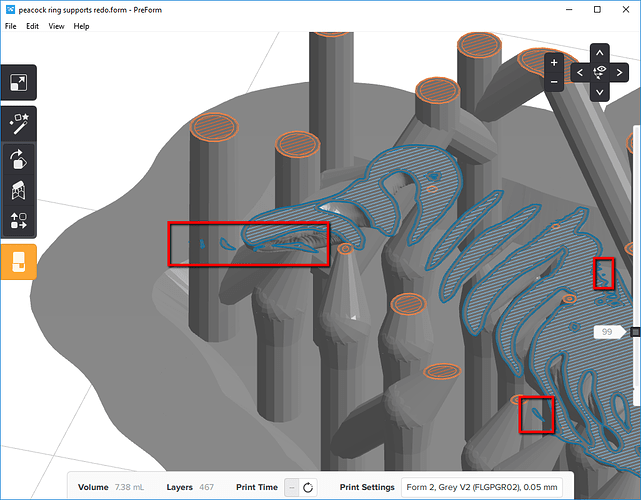 Yeah, that’s one of the types of objects that’s very difficult to print well with this type of printer–stuff like animals with sculpted fur are difficult to print for the same reason–small details that stick out all over the object require too many supports which destroys the detail.
Even splitting the object is a problem because while that means you could avoid putting supports on detailed areas you would have problems trying to put the pieces back together without there being a visible seam afterwards. I can’t tell entirely but if there’s two edges that you could split it from that would be easy to clean then that would be a solution.
A lot of my parts are split up simply so that I can orient details in better ways to get good quality results.