Poor Quality on the Supports Side

The surface detail on the side with the supports is very poor compared to the non-support side. I realize there is always a little drop in quality on the support side in SLA printing but this is bad. It looks like all the details on the supported side are “melted.” I have read the previous posts on similar topics without much resolution. The test print they sent me before I bought the Form 3 did not have this problem. Is it a cleaning issue? 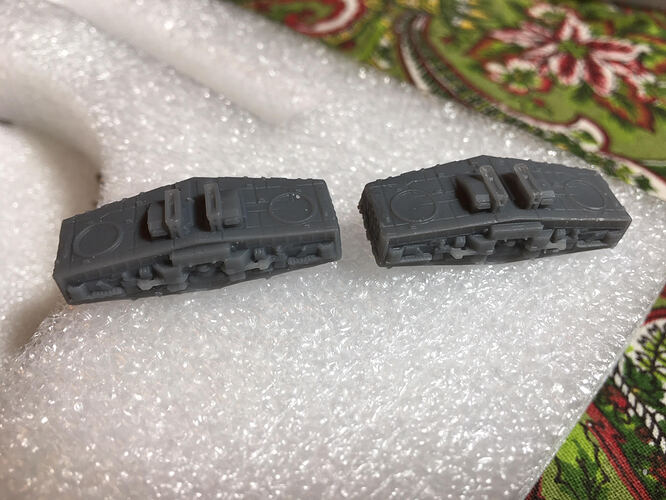 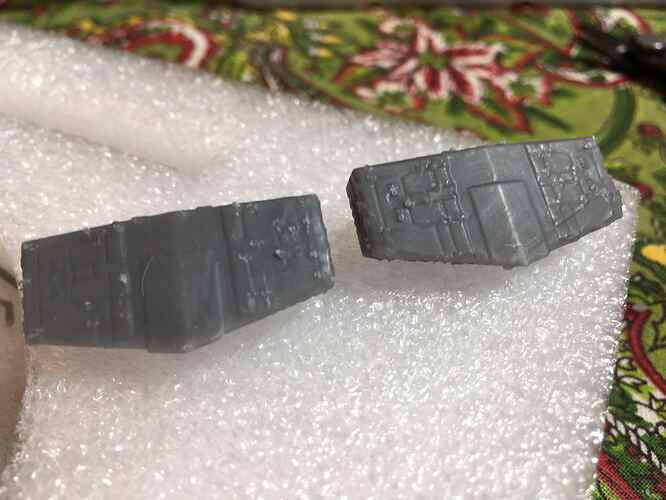 That’s always going to happen with SLA printing to some degree. There are ways to get better results by having a good orientation so that important details are angled upwards more. Careful support placement is also important so that you can use the least number of supports and that if you need to do some sanding they are in areas that are easier to sand.

Thanks for the feedback. I have tried multiple orientations, models, and support structures. I have experience with SLA printers. If this is the best the form 3 can do on the support side it is very disappointing. I have gotten better on cheaper printers. I cleaned the optical window and resin tank per the maintenance instructions. All the details on the support side seem as though they are “covered” up by excess cured resin. I will see if I can get better pictures.

Has anyone had good luck printing small, detailed parts which require good details on all sides?

the details look very soft on those parts.What resoultion are your printing at.What size touchpoints are you using and what orientation are you using to print.if you can post a pic of your part in preform that would help

In order to make it a little more clear I ran a new set of prints and captured the settings, etc. I printed two copies of the exact same part with small details on all sides. I rotated one copy 180 degrees so you can get a clear view of how different the same details look depending on whether they are on the support (platform side) or not.

These are printed in Grey v4, 0,05 layer thickness with the orientation and supports as shown: 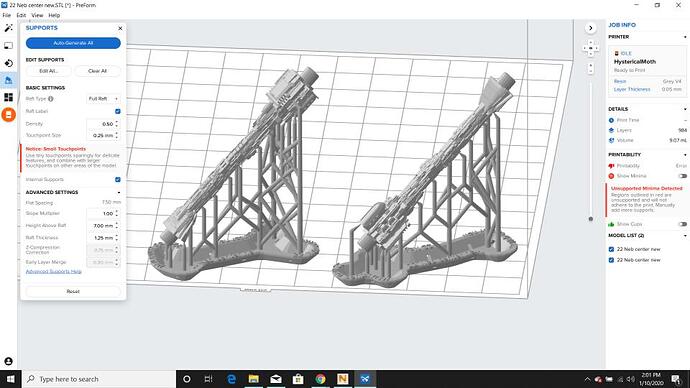 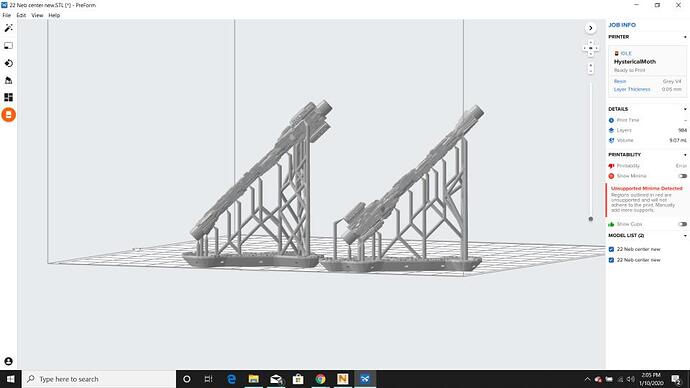 As you can see the supports are fairly minimal.

Here are the results. As mentioned the two models are exactly the same just rotated along the long axis 180 so you can see the difference in the printed details between the support and non-support side: 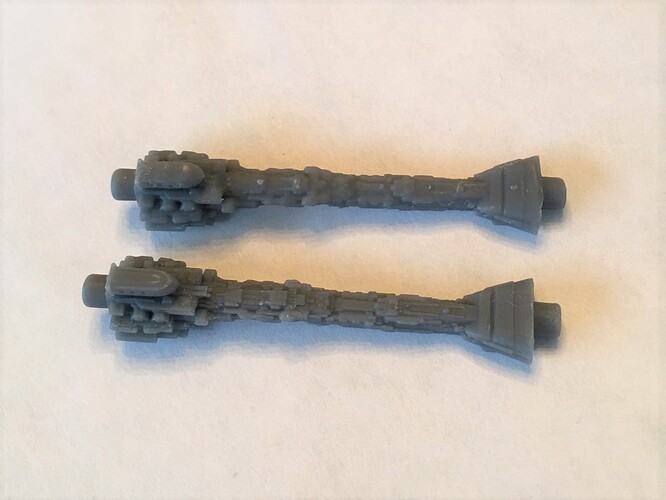 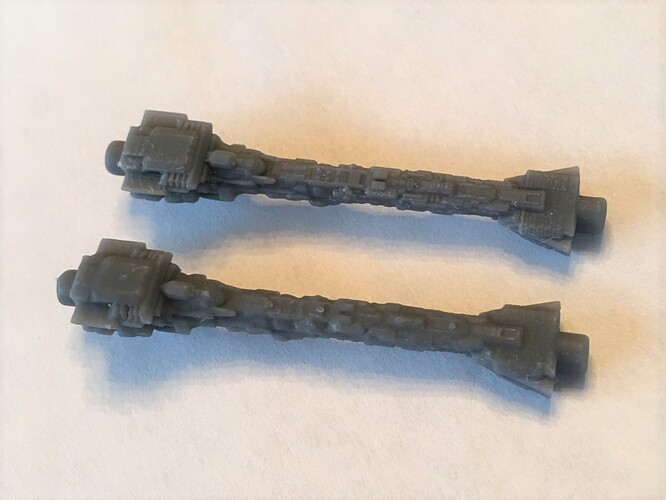 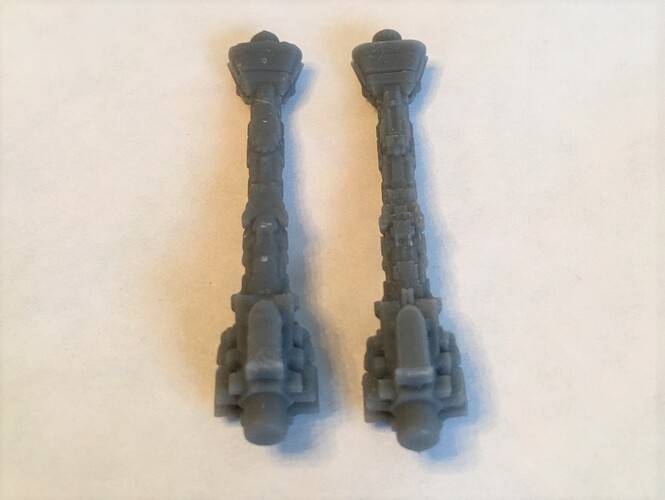 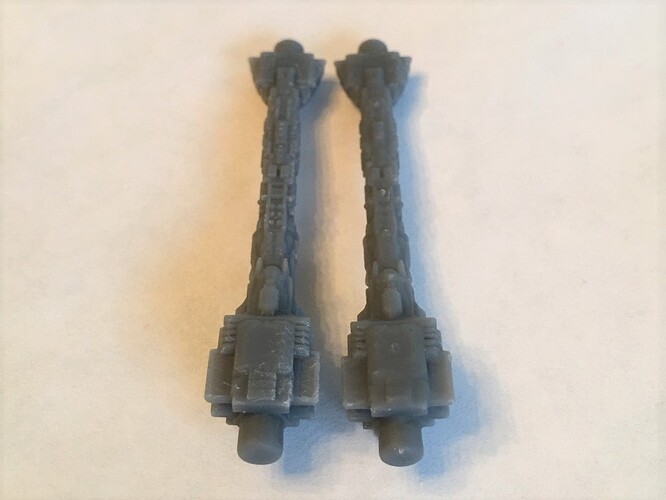 As described the details on the support side have excess resin cured over the surface of the model washing out all the details. This is what the support (platform side) of the same model looked like when I printed in on a Peopoly Moai SLA printer: 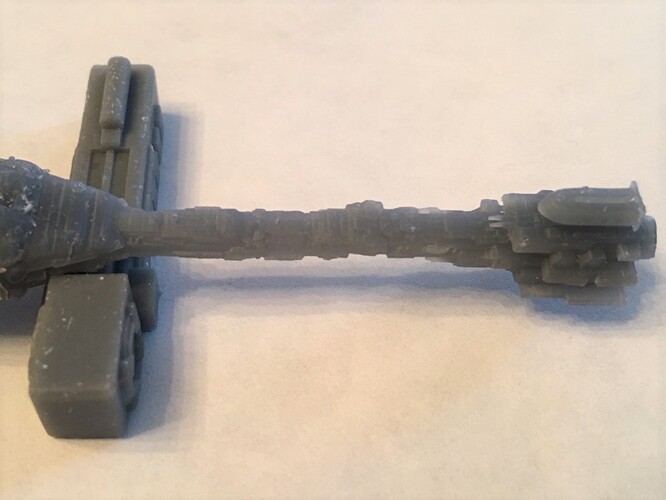 There is some damage from the supports but the details are obviously clearer than the Form 3.

I should also note that I was mistaken when I said in my initial post that the custom test print I got from Formlabs did not have this issue. Upon looking more closely at the part they sent, it does have the some areas with the same over-curing of resin on details on the support side of the model. This leads me to believe it is a Form 3 issue not my specific printer.

It’s an SLA issue, you can’t stop the light source from going beyond your layer thickness, that means that when it’s printing downward facing surfaces that the light is extending into the resin again and it will cure extra material onto the bottom of the print. All SLA printers have this issue.

Are you using Preform 3.3.0 and is your firmware up to date?

I suggest you print these vertically, with the heavy end down. Do a range of tests, in Preform, to get the right density. Start at 50% and gradually increase the density until Preform tells you that it is fully supported.

I get similar issues although they aren’t usually that bad. But often my prints do not have so many crevices where resin can pool. Definitely I notice the edges on the support side have little defects. The more edges, the more defects.

Maybe something you could try is, in your modelling software, slice your print right down the middle. i.e. cut it in half with a plane. Then you could print the two halves with the flat side getting the supports. Once it’s printed, sand the flat side smooth, and glue them together – just use some more of the same resin and cure.

I suppose if you were to be really smart about it, you would print it with some “lock/alignment” mechanism, so that fitting the two pieces back together with the appropriate alignment would be easy.

Hi,
I’m printing flat shells and I noticed the same effect. The effect is very well visible for horizontal areas which are facing to the raft and have supports. My understanding (proved by different experiments) is that when you dip the detail into the resin and then you take it out the resin can’t flow away quickly from areas near horizontal and stays there much longer. Rafts make things worse as the cappliliar effects caused by thin supports hold the resin.

When there is trapped resin which can’t flow out quickly and when the detail printing takes long time the parasitic resin curing can solidify the resin. During the exposure there is inevitable parasitic light which diffuses through the object and sensibilizes or semi-cures any residual resin. All print details in this area will me “smeared” and covered by semi-cured resin and this is what looks like bad quality print.

I tried different ways to clean the semi-cured resin but in vain - it’s obviously softer than the other resin but it’s cured enough to be dissolvable.

If the detail orientation/structure create small areas and “vanes” where liquid resin can be trapped the quality in this places will be compromised, supports in these areas make things much worse.

Maybe the real solution is the software to detect “vane” conditions just like now it detects “cup” condition where area is sealed. Once the user is aware for this condition he can do some things:

In short - changing the orientation to avoid horizontal areas, decreasing number of supports in the area and adding some drainage holes can completely remove the effect.

You can’t completely remove the effect, but you can do some things to reduce it.

I’ve had similar issues printing with Clear resin. The sample in Grey that Formlabs sent me was nearly flawless. It’s hard for me to believe that the sample they sent was printed on a random Form3 pulled off the production line. It seems like it would’ve had to been on an optimally tuned printer… not one the goes out to a customer. I’ve got some Grey resin, so I need to do a print with that to do a comparison. So far, I’m very disappointed with the print quality.

It’s an SLA issue, you can’t stop the light source from going beyond your layer thickness, that means that when it’s printing downward facing surfaces that the light is extending into the resin again and it will cure extra material onto the bottom of the print. All SLA printers have this issue

Thanks for all the suggestions on how to minimize this effect. I will definitely give them a try. Hopefully they can make improvements with firmware.

Luben111, when you say “horizontal areas” you mean features that are parallel to the build plate?

I suppose if you were to be really smart about it, you would print it with some “lock/alignment” mechanism, so that fitting the two pieces back together with the appropriate alignment would be easy.

Good suggestion. I’ve actually tried this. The challenge is the non-detailed side of the parts where the “lock/alignment” (lego connector type) part is gets the overcured resin, so the parts don’t fit together without a ton of cutting/sanding. Disappointing when it takes more work to get the same results as last generation SLA printers.

Yes, I’m talking about areas parallel to the build plate and also notice - facing to parallel plate (areas facing in opposite direction to build plate are not affected).
Something more - the effect increases if the affected side has some features that can hold the resin (some borders and “lips” to prevent the resin from flowing out). I would call the effect “vane effect” or “tub effect” when the resin can not flow out from the area because of the surrounding structures. Supporting structures make things worse because of the capillary effects, At the moment PreForm software is detecting caps (trapped air) but there is no detection for areas that can hold the resin and eventually compromise the quality because of the parasitic UV light curing,

One example of the same effect which probably everybody noticed is that small holes (for example 1mm) are coming out with smaller diameter and shallower - personally after printing I’m drilling these holes to ensure the diameter and depth is the correct one.

I was printing flat details (shells) and noticed that the quality changes dramatically depend on the angle of the shells relative to the build plate, using automatic settings is not always yielding the best results (PreForm software is not fully optimised for printing flat objects). 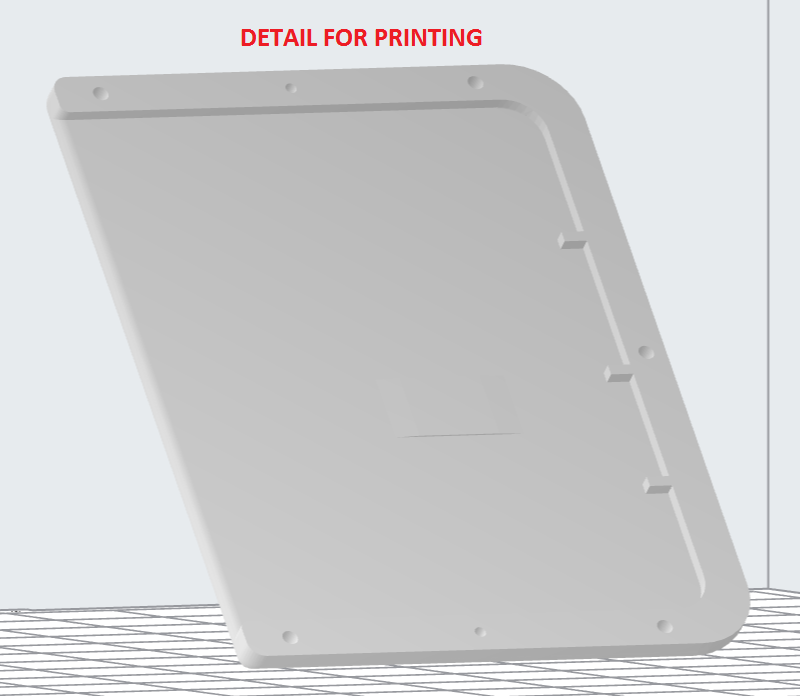 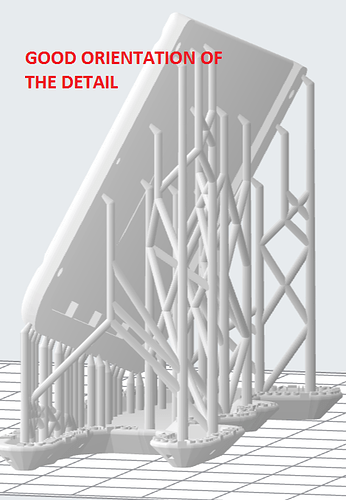 good471×679 73.6 KB
If you orient the detail to be more horizontal - the quality of the surface facing the build plate is bad 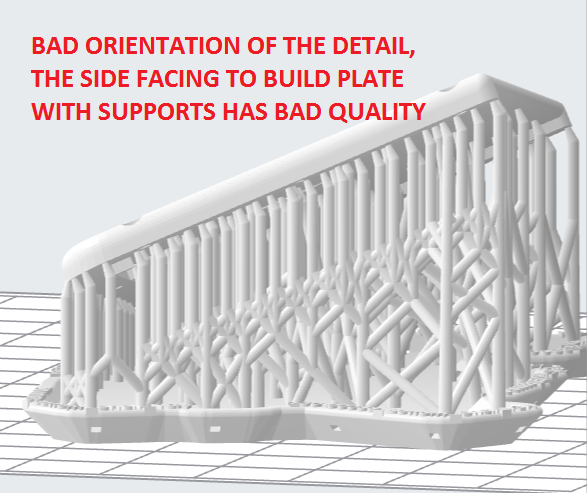 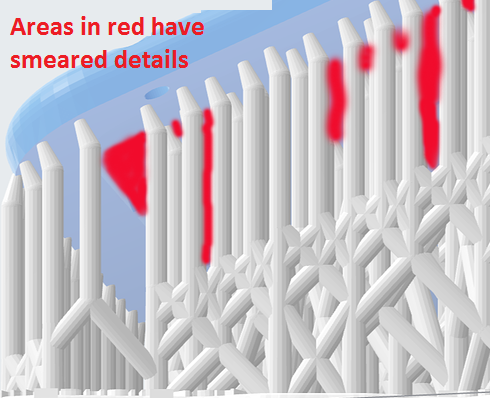 It’s an inherent SLA issue, but there’s a lot of things that can change how bad the effect is. The settings for the printer itself will change it, but it also heavily depends on how your part is oriented and the placement of the supports.
You’re comparing to a test print on the same model of printer, so unless the printer firmware on yours is different/worse than what Formlabs used when they did your test print then it’s going to come down to how you’re orienting the part and placing supports.