I have a newer recording of both machines side by side…hopefully you can hear the clicking of the newer vs older form2 versions. https://drive.google.com/file/d/1bCodf9P9HUuShDMRiNnIY-WWGDzbhCKn/view?usp=sharing

Was the age od the vats the same on old vs. new, and did you run a print (or prints) on both prior to the print in the video?

Older vats, and vats that have been under resin long (and are mostly oxygen depleted) tend to cause more adhesion to parts, so offer more resistance to the peel.

Additionally, are both the old and the new unit running the same firmware? The peel changed dramatically about a year (?) ago and, i think, again, recently, to make it faster. Every iteration seems more and more violent to me (Formlabs keep claiming they’ve reduced the peel forces, though).

Yes, they were as close to being the same as I much as I know it to be possible. We usually order 2-4 resin tanks at the same time, same with resin cartridges. I use my vats until there is little to no ‘visible’ spaces showing on the tank printing surface, which is shown on 'my dashboard>materials. The noise that I here has little to do with the actual printing, but rather the step motor that moves the wiper arm. The noise begins when I start a new print job and the tank moves to start the warming process. I took the a few of the earlier videos at the start of a print job, and also during the print job.
Yes, all of the printers we have run the same firmware [rc1.16.7-12(14, Dec 2017)], except for the newest printer that we just received[rc1.13.5-101 (24 Apr 2017)]…I have yet to connect and update it.
The only issues that I have had with peel is when I use Dental Model resin, but I was advised to tweak how I position the models to reduce the force of the peel process between layers…and now I have no issues with unfinished print jobs. Of course I adjusted the settings that they recommended to reduce the amount of print time to a more acceptable time-frame.https://drive.google.com/open?id=1epk59S9FRhL1GD0J6YqkJiZfwJi6Kh9-

Strange. Got no other ideas then.

@Formlabs - did the stepper drivers change between the old Form2 and the new Form2?

according to the Frew, they made no mechanical changes…only changed the outer housing, but purely cosmetic…?

Still, it occurred to me that maybe they’ve switched from Trinamic TMC2100 to TMC2130 and enabled StallGuard and that’s what’s causing the knocking sound somehow.

I have done a few prints on my Form2 and today is the first time I have had this clicking / banging noise.

Only thing new is the machine did a Firmware update this morning to match the new Preform SW.

I will change the resin and tank after this print and try something else to see if it is still happening.

Could it be FW related?

I’m having the same issue, and I also believe it appears since the last update.
But the sound has nothing to do with a big surface aera of the parts, I clearly see a metal bar jumping out of its track when the tank reach its maximum to the right.
the metal bar is here: 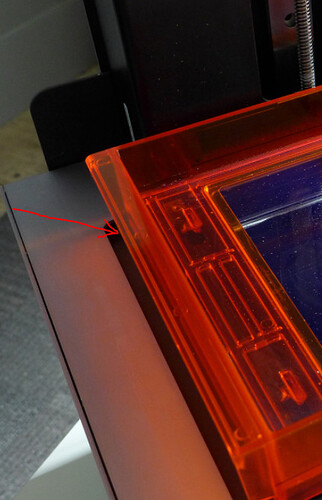