I have a problem similar to the one in the vidoe (not my video though). The problem is that the printer makes this knocking sound during printing when the layer is just finished and the tray moves to the right. The buildplate also makes a little jump simultaneously with the sound. I have taken the tray off and looked around but I can’t really see anything that would cause this noise. Has anyone had this problem and know the solution or someone knows the fix?

This is the video that shows the same problem:

This can be normal in certain situations. If you could provide at least a screenshot of the part you are printing in preform I’m sure the reason will be found. 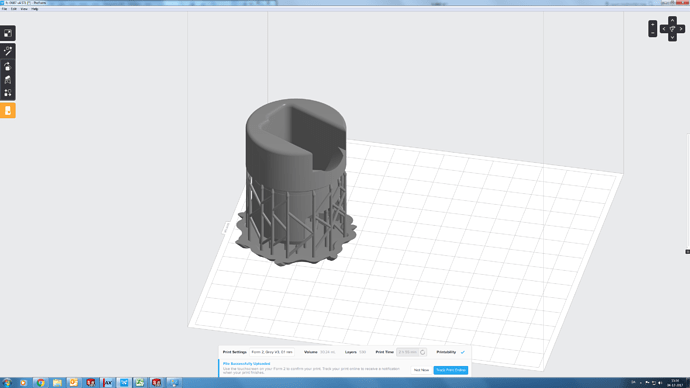 This is the part that I am printing

It doesn’t look like there would be an enclosed hollow area which would cause the part to strongly adhere to the tank due to suction forces (see this thread for more info).

When you go through your part with the layer slider in preform, my bet is that there are some quite big cross-section areas which will also make it more difficult for the printer to detach the print from the PDMS after each layer.

I wouldn’t be worried about the printer making noise like that with a model like the one you are showing, it’s just due to the force required to peel the part off the tank.

Sounds to me like the part sticks to the tank… I had a similar sound with a part that had a wide flat area against the tank and was popping up at each peel.

I have it on my machine and it’s a broken catch on a resin tray. The front left catch that engages the lock in the bed is broken off. I notice the knock and also that the corner was lifting every time the build plate lifted. This was more noticable during the making of the support base and lessened as the parts were being made. Hate to throw it out as it’s still very usable.

I have just looked at my resin tray and nothing is broken so I don’t think it can be that causing it?

How small should the cross-section area be before you would expect no noise?

I have just checked my model and without supports the biggest cross-section area is 758.63mm^2 should this be a problem?

I don’t from which surface area the peeling process starts to produce noticeable noise but I guess it would also depend on the shape of the area as well as the material and even maybe the wear of the tank.

My gut feeling is that 750mm^2 may very well be enough for the peeling process to start producing noise.

Did you part printed successfully ?

In all cases this is not an issue, formlabs tested the peeling process by printing a 145x145x175 part, there is a photo of this somewhere in the forums.

My part printed kind of succesfully but I think the surface quality is worse than before the noise. I am using the standard gray material but my tray might be a little worn could this be the problem?

I am using the standard gray material but my tray might be a little worn could this be the problem?

Can’t say for sure but half of the prints we do in grey generate noise during the peel operation and we have no issue with print quality after more than 8 liters and several trays used.

How often do you change tray?

The sound in that video is suction being released. The part you posted has a giant void in the center which if not vented will create a vacuum (and suction force) inside it every time the printer tries to pull it off the bottom of the tank. Play with a empty glass and a sink full of water and check out what happens when you dunk it in the water and pull it out in different orientations. To fix this you could add a vent hole or orient the part differently. This is also likely what is causing surface finish problems because when the part goes back down in the resin you are now pressurizing this void and the resin is squirting out around the interface of the object and the bottom of the tank while the laser is trying to cure it.

(Based on my experience and some educated guessing)

Ahh yea you can’t really see it but i actually have a hole going through the part so that it can’t create the suction you are talking about: 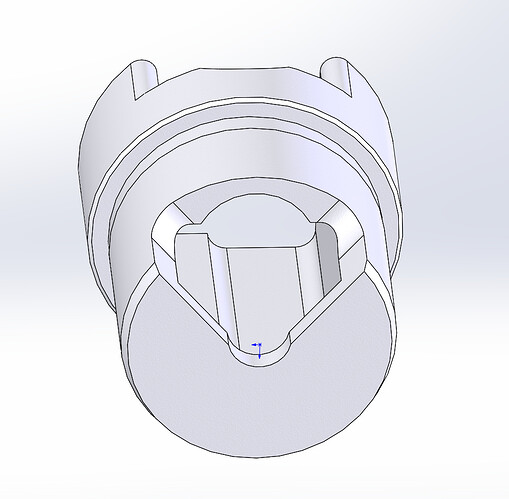 That should work. Another thing, if possible, set the part at a slight angle of up to 10 degrees. Any more and Preform will want supports on the sides. This way there is no chance of suction getting into the act. I use this method from time to time on large pieces.

I also have encountered this sound since the newer printers have been introduced. The original two printers I received were dark grey, and the last two printers have a gold-ish/platinum hue to them, and these are the printers making the sound when the tank or the wiper arm moves. I believe that this is the reason why I had an error occur when the arm stuck during a ‘clean sweep’ between layers, under the build plate. I just received a new printer last week and it makes the same noise. The original printers do not make that noise.
Here is the photo of both.
https://drive.google.com/open?id=12oA7da5MJzf25-tTyKpyQ__gQ8_dUfTO

The new shell color was a cosmetic change and there aren’t any significant hardware differences between the two machines. There can be a few different causes for this knocking sound and over-compression or ‘cupping’ are some of the more common. If you’re able to upload your .form file, that would help to rule out a few causes.

I assumed it was a cosmetic change, but the sound did indeed start with the purchase of these newer machines with the ‘cosmetic’ changes. I have included 3 short videos showing the difference between our older form2 and the newest form 2. The 1st video has no sound when the wiper arm moves, only the build plate raising and lowering. The clicking sounds appears on the 2nd and 3rd video. The sound is faint on the 2nd video vs the 3rd.

I’m having a bit of trouble distinguishing the difference between the 1st video and the other two. I can hear a clicking sound in each of the videos but it’s tricky to gauge whether that’s background noise or coming from the printers. Are these each running the same Firmware and PreForm versions?