How to support this part? Preform doesnt work

i need to print this part and its too small for preform to support it automatically. It has to be very precise so I don’t want to print it flat on the printing bed.
I tried to create supports with Meshmixer but it generates 3000 of them for the tiny part :))

What do you think?

First off orientate at angle to print bed, angle gives better wear on resin tray, you could print on one edge, but I reckon this would leave excessive wear on the resin tray. Anyway, add supports manually to the part.
I’ll download and do it for you later today. Sometimes preform doesn’t get it right with supports, I am printing a horse with rider, and using preform, not enough supports, now doing it successfully with manual supports.

At 1/2mm thick, this part is too thin to be supported without warping. I understand that you don’t want to print it flat on the print bed, but unfortunately, it might be your only choice.

Since there is compression during the first few layers, I would make the part 1mm thick, and print it flat on the print bed, without support. Once printed, pop it off gently with a razor blade, and measure the thickness. depending on the thickness you get, you can adjust your model to either subtract or add to the thickness and print again.

I would also print it near the corner at the platform hinge. This way, there are less stresses during the peel, and it’s easier to get to it since it will be at the edge of the print bed.

Joe90 what software do you use? I have seen tutorials for Meshmixer for a horse+rider.

Dudemeister I dont get it according to warping - if you print the first 10 Layers of any big part, or 10 Layers of this tiny one - whats the difference? I thought about extruding it and sand the material partly away, like you suggest but it would be much more accurate printed just flat but supported… i guess

If you print this piece flat, the cross section is going to be rather large, and the peel forces will pull on the support contacts warping the area around the supports. It’s not going to be a flat surface with a few dimples on it, it will be pretty warped.

You could orient it at an angle, which will present a much smaller cross section, but I’m not sure how well it will come out.

You said PreForm wouldn’t create supports for it automatically, and indeed the error you get says the model is to thin for the algorithm to work, but if you orient the piece at an angle, it works.

I attached the STL. Try it and see how it works

Something like this. You need to try it and see what happens, Yes it is thin, yes it may warp. 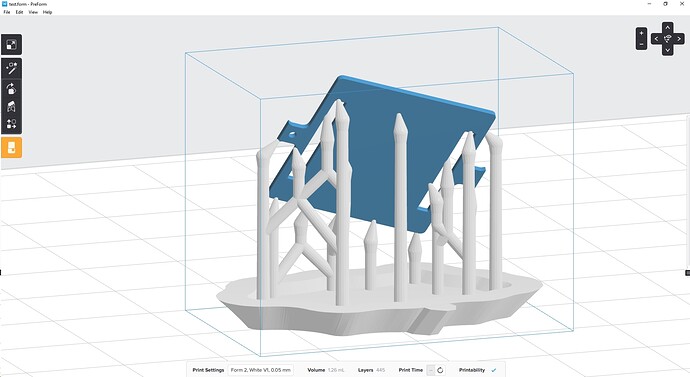 That part is too thin–what I would do is make it thicker so that you can print it and then sand it down to the thickness you desire. I’ve had some success that way.

Yes, Ill give it a try both ways

Dropbox is a free service that lets you bring your photos, docs, and videos anywhere and share them easily. Never email yourself a file again!

I tried both, a 1mm plate flat on the build plattform wasnt ok - there was merely a shape of it, 0,2mm thick.
The normal orientation with an 45 Degree angle was a full success at 100microns.
Thanks a lot folks!

If you want to combat warping, orient at 45 degrees in both the X and Y axis. That should prove a pretty effective printing orientation and evenly distributes forces such that it warps evenly and the end result is flat. Post-curing on supports should also help to keep your part flat.

And for flat thin parts make sure to not heat it because heat will warp it.

a 1mm plate flat on the build plattform wasnt ok - there was merely a shape of it, 0,2mm thick.

That means your printer over compresses the first few layers. Next time you print a part with supports, take not of the base thickness you set in Preform, then once the print is done, measure the thickness of the base Not where the raised edges are, but in the middle (it’s easy to break the base so you can use a pair of calipers on the inside). How thick is it compared to what it should be?