Has anyone encountered rashing in Form 2?

Was wondering if anyone here has encountered rashing on Form2 prints and how often? 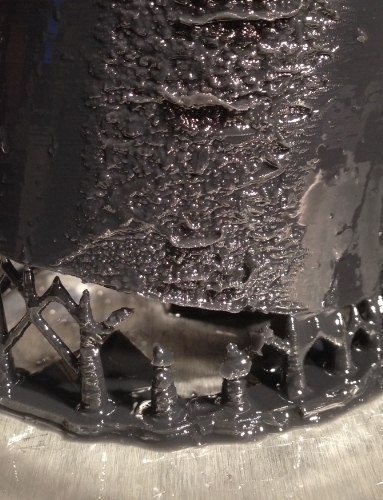 The most common problem I encountered with the Form1+ machines was rashing over vertical surfaces of the prints, as seen in the picture above. Printing in different orientations, mirror cleaning (all four of them) or mirror replacement never seemed to help much. Would be grateful to know if any of you encountered Form 2 prints with rashing.

That is an excellent question.

It seems my printers problems are not so unique to myself. Did support ever sort your printers rashing problem?

Did support ever sort your printers rashing problem?

Never without sending printers for repair. Even after repair, certain machines would go back into “rashing mode” after not so many prints.

When they “repaired” the printer, what did they actually do? How long did the repair last?

Whenever rashing was the reason for sending the Form1+ for repair they had to replace parts and to re-calibrate. Repair time was 1-2 weeks not including shipping time,

Do you own a Form 2 and have you encountered rashing on its prints?

I have a Form1+ and Form2. I did see the same problem on the Form1+, but usually resolved the problem by thoroughly cleaning (CAREFULLY!) the big mirror and the two small galvo mirrors. I would also be very careful to scrape the bottom of the resin tank to get the pigment off the bottom (again, CAREFULLY). You have to be surprisingly aggresive with the pigment, as it seems to want to stick to the bottom. I used a plastic flat putty knife and would have to push instead of pull to get the pigment to move. You will see the difference as it starts to come up. Also, filtering the used resin seemed to help quite a bit - I would filter after every print.

The Form2 doesn’t show this problem yet, but I have only done a few prints. I will report back if I start to see it.

Haven’t had that issue with the Form2 at all, only had the issue with dusty mirrors on the Form1+
On the Form2 it prints equally well on all sides of the print

Thank you. I believe the rashing in my machines was not caused by dirty mirrors or tank since it was gone only after other parts where replaced and the machines re-calibrated. So if Form 2 prints do not exhibit rashing I guess it is, at least partially, due to some additional change besides protecting the optics.

Even when there are always some close-to-vertical sides no matter what orientation is chosen? For example, when printing a sphere.

I have to disagree with John_c. Whilst the form2 is much better than the form1/1+, it is a limitation of the process that the side of the print facing the tank can suffer from poor surface quality compared to the rest of the print, not always - it’s variable.

I printed a vertical cylinder and all sides are perfect. The only issue I’ve had so far was that there was some dust or something on the glass between the tray and the printer which ended up causing holes in the print because they blocked the laser. It was a very weird issue until I checked the glass and saw some stuff there–make sure to check when you get your printers!

Make sure to check when you get your printers!

Will do. Thank you!