Printed several items from a new Grey V4 tank. Have one part left that is 62ml with supports. I know the cartridge is empty but the tray is very close to full and I expected the printer would figure this out, tell me so and offer to continue with the print.

Nope - after watching the mixer just go back and forth for 45 minutes I called support. They said a bug is preventing that message from appearing so tough luck getting that last 62ml part out of the roughly 300ml of resin that is sitting in the tank.

Use a long stick and lift the fill float into the full position and hold it until it says filling done or similar. Hope this helps.

Thanks I will try that.

Is it that you don’t have another Grey cartridge on hand or you don’t anticipate using Grey anymore and want to just use it up? I think the solution winds up being the same thing xxblindxx said - fooling the printer into thinking the tank is full, but I just wonder why you wouldn’t just stick a new Grey cartridge in and keep going.

Just didn’t have another cartridge on-hand. I have resolved that and printed the part.

This is a known issue with the resin level sensor and the fixture of the problem is simple:

I had the same issue with the resin - cartridge was empty but tank was overflowing, initially tilted the printer during the start to fool the sensor but after the latest firmware updates and calibration of the sensor everything works as expected

Level calibration is not working for me with latest firmware- its stuck on stage 4 and not performing the calibration.
have to boot the machine every time I try
are you experiencing the same issue?
Thanks

Wait for about 20 mins.I have the same issue like you.It tooks longer than you thought.

I have the same problem.

The trick here is to replace the empty cartridge with a full one.

I just had this problem today. Though it wasn’t filling for 45 minutes.

I just replaced an empty cartridge and installed the latest firmware. When I went to print the filling sequence seemed to be stuck. When the resin level in the tank seemed to surpass previous fill levels and was obviously full enough (the resin level bouy was being raised to max hight when tank was mixing) I aborted the job. I didn’t want to leave for the day with the printer overflowing.

It stayed at 4/5 for over and hour. So I aborted that. It never completed.

After the printer restarted I re-leveled the printer. It was still in the blue circle but not dead center.

I started the job again and it just started printing.

I am unsure if it was the calibration that helped, or the printer leveling was it, or simply just restarting the printer that did the trick.

I’ve had some resin cartridges where the rubber valve has not been slit fully so resin can not dispense. A scalpel does the trick.

Had the same experience. The little flap was not fully slit open. Worked flawless thereafter.

I have a brand new printer with the resin cartridge being the issue. The rubber stopper had no slit in it and there is no flow sensor to tell if resin is coming out. Solution: Stanley Knife a SLIT - CAREFULLY so that the resin can come out.! By the way - make sure your cap is closed before you do this… I learned the hard way… 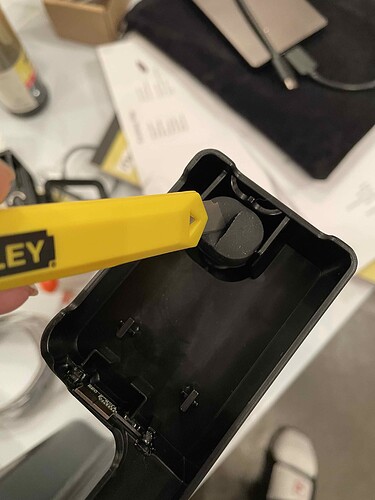