Form 3 print looks like it has cake icing on it

We have had our Form 3 for about a month now, and are generally happy with it. I pulled a print this morning that was basically an elongated cube. It came out with a texture on one side that looked kind of like it was cake icing! Does anyone know what would cause this to happen on a print?
[Image Here]( 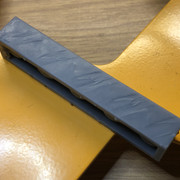 How big is that model? Have you printed it before, without the unwanted artifacts? Are they present only on that side of the print?

You could try increasing the size and density of supports, play with the orientation, make sure the optical path is clean, and that the resin is fresh and mixed.

Or it could potentially be a case of the known “ripple” effect suffered by the Form 3 (perusing the Form 3 section will pull up other examples, like here and here). Either way, I’d open a ticket with Formlabs Support.

I find this type of thing happens most frequently because of one or more of these things:

that defect looks very similar to what some of us have seen with the Form3.What resolution were you printing at.have you had successful prints of this model on the form3 before?

I have the same issues. I am brand new to resin printing so I could be making a lot of mistakes. Up to this point I used the “autoprint” feature on the software since I don’t really know what I am doing yet.

BUT, all my parts printed with the white resin (FLGPWH04) have ~ 0.25 mm extra layer…just like icing. I am following the suggestions for both the wash settings as well as the curing settings.

Is this just something I have to live with and design around?

This was printed at 50um. I didn’t reprint it because that particular face was not important. I was just wondering why it would happen so I could maybe prevent it in the future.

You mentioned old resin. This was printed after replacing the resin cartridge for the first time. Should I be dumping out the resin from the tank and cleaning it periodically?

Hi rkagerer,
The part was about 76mm in length. I did not reprint it, but it does look like a similar artifact that appears in parts that have the “ripple” effect. Thanks for the links!

I think it had to do with the age of the resin that was in the cartridge as it was expired and had not been used in a long time.

As long as I keep the tank covered then I do not worry about the age of the resin in it. And even when I change to a new tank because an old tank is worn out then I pour the resin from the old tank into the new one.

Thank you Matt!
How often do you replace the tank on the Form 3? We have only had ours for just over a month.

I am not sure exactly how often but not too many times.

Hi,
I’m printing mainly thin flat shells on my Form3 and I have seen many times exactly the same effect. I can tell you that it’s not old resin, not bubbles and not low temperature. What I found is a process I call “parasitic curing of residual resin” - it occurs when I do printing of flat surfaces oriented close to horizontal, which are facing to the build plate (the side not facing to the build plate is not affected by this effect). It’s parasitic resin curing - when the resin stays for longer on detail surface and when printing is in progress, the diffused UV light from the laser spot cures partially the residual resin in vicinity. Having supports in the area worsen the effect as supports have capilar effects and slow down the resin flowing out (resin is trapped for longer).

Fortunately there is a simple solution for the effect - changing the detail orientation and trying to minimise the supports in the area can completely remove it. For example if you print the same detail and the affected surface has 60-70 deg angle to the build plate (detail is closer to vertical position) you may not see any problems on the surface. Well, as Form3 print time depends significantly on the height of the detail, changing the detail orientation will make the printing much longer (maybe 2 - 3x longer).

It would be good if the software can detect these “vane” conditions just like “caps” and unsupported areas and warn the user. Users are tempted to speed up the printing and they try to orient big flat areas parallel to build plate to decrease the total time, unfortunately this is affecting dramatically the print quality in some places because of the described effect.

Would this be less of a problem with resins with a higher pigment content like black or white?