Form 2 print tolerances - What can I expect... Too much?

I grew 2 of these parts in order to asses the different top and bottom limits that I will eventually get when we have these parts printed GFPA6 SLS for production.

The SLS process has a quoted quite frankly horrific print tolerance of ±0.3%

I figured that the SLA print accuracy from the Formlabs 2 would be much better than that, and by scaling up and down my nominal CAD model and printing 2 parts at top and bottom limits, I’d get 2 parts somewhere ‘quite close’ to what I need to test the feel of the assembly. For reference, the 2 parts I embossed one with “+0.3%” and the other with “-0.3%”

Honestly, IMO if you want to achieve that accurate dimensions / small tolerances in your case it will be better to make a first sample, measure the design elements that you need to be “super” precise and provide the offsets already in your 3D model. That’s what I do when I hit similar problems on certain parts.
Of course you’ll have to go the design loop twice but for sure this way for better result is worth it.
I for myself just make sure on my second attempt that the orientation / support is similar to the first one. But maybe that’s just something for my head…

It’s a thought,…
Suppose I could just scale everything 0.9945 in preform
Long term, don’t much fancy building everything twice or producing separate cad data sets in order to print at the right size and to go into production.

There’s some things that can affect the accuracy–if the model is not supported enough it can flex as it prints which can change the dimensions. And at the very least, the underside and the places where supports attach to the object will accumulate extra cured resin due to the laser bleeding through the current print layer.

Ah, so it will be totally geometry & support dependant &cant just say, "my printer is X factor out of scale.
the supports added may then account for the increased length

there are around 55 supports along that long face, so 55 x whateverincrease in length you are describing… 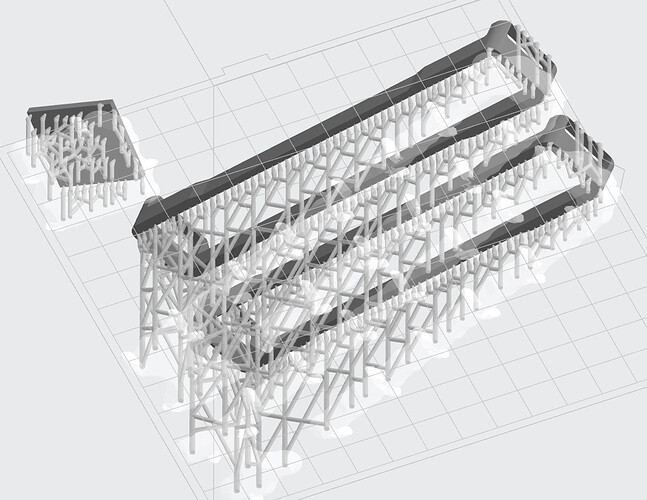 There’s a possibility that the parts may generally be a little bit off, whether the material itself might shrink or expand due to curing, and that is something that you should be able to account for my adjusting the scale.

For the parts there, you will definitely end up with a height that is a bit more than intended due to the amount of support on the bottom. You can improve it a bit if you angle the parts more vertically–it looks like they are at a pretty shallow angle. That would also allow you to use fewer supports.

Also, I think you can adjust scaling in Fine Tuning… so if your prints are all coming out just a little bit off you may be able to tune the printer as a whole to fix it so you wouldn’t need to scale anything in your CAD file.

I built them completely vertical last night (figure it would be ok as the CSA is relatively small), and although I haven’t taken them off the supports yet, they do seem to be closer to where they need to be, so an interesting experiment if nothing else. 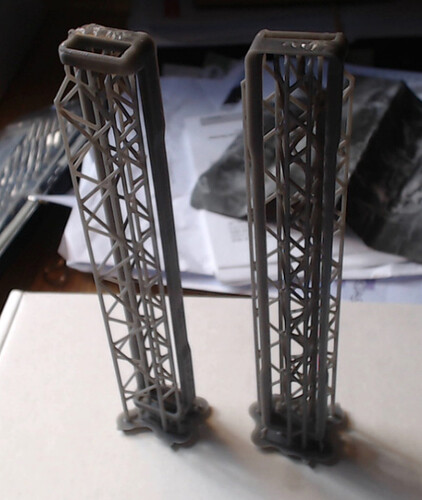 image.jpg517×612 92.3 KB
I have the scummy blistered cured resin where the resin has hung on whilst draining though again,… Yuk

These parts, once i’d removed the weirdness (the blisters kind of scrape of with hard material behind them)

Happy with that,
Cheers

An optimal orientation for these might be closer to 45 degrees in the X axis and a 30 degree or so tilt in the Y axis. That should cut down on the number of supports you need and maximize the dimensional accuracy of your parts in all axis.

Yeah, you don’t want it completely vertical, if you get it closer to 45 degrees it will also be more stable and reduce the print time. Not sure about why there’s resin accumulated on the top, unless you exposed the print to light before soaking it in IPA.