I can’t find the sleeve bearing you specified.

What are the exact dimensions? The inside is 12.0 mm right?

I found the bearing with the part number given on mcmaster.com website. I bought the laser with the G-8 lens and after focusing locked the adjustment in place with fingernail polish. The clearance into the bushing is very close, it took some patience to get the laser in place but be gentle and patient, it should go in. There are no forces to cause it to move once installed so I did not attempt to lock it in place, only lock the bushing with the original clamping screw. My galvos had been removed so getting them adjusted for even a starting attempt was a challenge. I am sure the factory has a procedure to get them mechanically close with some sort of file that puts the laser near the center of the build area, then suspect they use pots on the board to fine tune the current to the galvos for fine tuning. Good work!

Ok thank you. How does your printer print now, after laser replacement and galvos adjusted?

It prints well. I have little experience with this tech but printed a lower plate of a set of dentures with some generic clear resin and sent it to my nephew for assessment. His is a dentist and sent the printer to me to play with after it failed and proved more practical to replace than attempt to repair with his knowledge. You are obviously well versed in the tech, I less so. I am a retired electrical/mechanical engineer and long time Ham radio operator and electronics experimenter who picked up FMD some years ago to play with. I suspect that at the Form factory they have some sort of mechanical setup procedure that puts the galvos in the general neighborhood and then a program or routine that allows fine tuning of the galvo currents for final setup?

Yes, sure. They obviously have a coarse mechanical routine to position the centre and then another fine routine to calibrate x and y span electronically.

The replacement laser continues to work well. I do note that the four columns uniformly increase in size as the optics test prints. Odd as I would presume that the area the laser traverses remains the same as the print progresses, just above the resin tray and at the bottom of the previous exposed area. The object in the center doesn’t appear to have any of the non linearity and is sharp and crisp, The columns are sharp and crisp but for the increasing cross section. Optics is not my forte and while it doesn’t make sense that the Z tuning would do this I am going to tweak that to learn what it does. A blind hog finds an acorn once in a while.

On closer inspection I noted that the columns do not linearly taper up in size as the build progresses but make a step increase at the start of each number printing on a side, five distinct size cross sections. With no correction the number 1 at the base of each column touches the build plate and the number is a bit squashed. With a Z correction of +.5 the change in size is the same but the number 1 is less squashed. With a correction of 1.0 the center object fails to build, leaving only what may be the first layer in the bottom of the resin tray. The change in size is the same but there is a slight space under the number 1 and it is no longer squashed.

The reason the columns get wider towards the top is The test file is attempting to print that part of the tower multiple times. Sequentially increasing the exposure of the resin for each layer. If you take apart the test file in CAD you notice that the second layer is exposed twice. The third layer three times, the fourth layer four times and so on. If the laser has any bloom or the optics are blurry this is where it’ll show, since that stray light has more and more chances to harden resin.

Thanks! In my situation I believe that translates to running some prints of my own devise to see if the indicated optic issues are significant enough to cause me issues. Print quality is very good and complete. Again, thanks for the response!

Received my laser module and lenses today. Gave it a run with G2 lens first, wow. Though the beam seems to be a little too thick, the optics test came out excellent! Moving on to testing G3 and G8.

Man, thank you so much. With G8 lens and having the galvanometers mirrors cleaned, I got a perfect Optics Test today. I have not seen such crisp printouts in years.

That is a pretty impressive optics test considering the circumstances! It does look like there is a bit of overcompression (we can tell by the number 1 being cut off) but this can be adjusted to ensure that your parts are the proper height. Here are the steps to try to account for that Z-height offset.

Thank you ! Hey, maybe you could help me out with my “factory” laser unit. The problem with it is this: it used to be perfect, but now it produces eliptical beam instead of circular, so all circular rods would come out eliptical. Now that I’m familiar with laser unit focusing etc, I’m thinking: maybe the factory laser unit somehow went out of focus… So, my question is: is there a way to focus the FL laser unit? Are those two groves around the laser’s “neck” for focus adjustment? 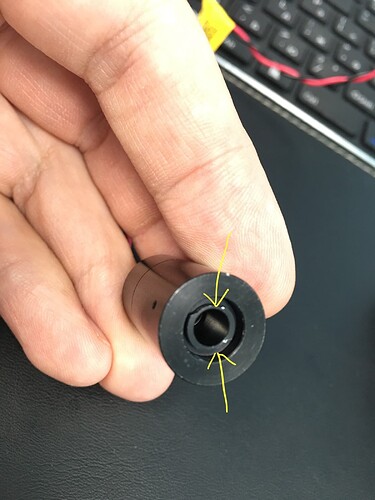 I will be totally transparent here, but I am not too sure about the inner workings of the laser modules themselves. We typically rely on our manufacturing process to properly calibrate the lasers before they make it to the field, and then are recalibrated when a printer is RMA’d and goes through a refurbishment process. We don’t have any official documentation on how to adjust the laser itself in the field, and don’t believe that is information that Formlabs would share in any official capacity.

You would have to measure the distance between the laser and the surface of the tank.
Then hold a sheet of paper at that distance from the laser and check how the beam looks like, and adjust to create the smallest spot.

Yep, that’s my plan. Now that I have the DTRs laser module running, I will try to adjust the FL module maybe later.