Firmware Updated to rc-1.8.9-27 and Clear Resin Print Not Sticking to the Platform

Today the firmware of my Form 2 got updated to rc-1.8.9-27. A model was printed with Clear Resin at 0.025 mm layer height before the update and it came out well. After the firmware had been updated, the 8-hour long Clear Resin print (0.025 mm layer height as well) had a curling problem at the base where it was supposed to stick to the platform. Half of the base is in the air, but the final print did not fail - so lucky.

Anyone know if this has something to do with the firmware update? This is my 1st time having the base curling problem. 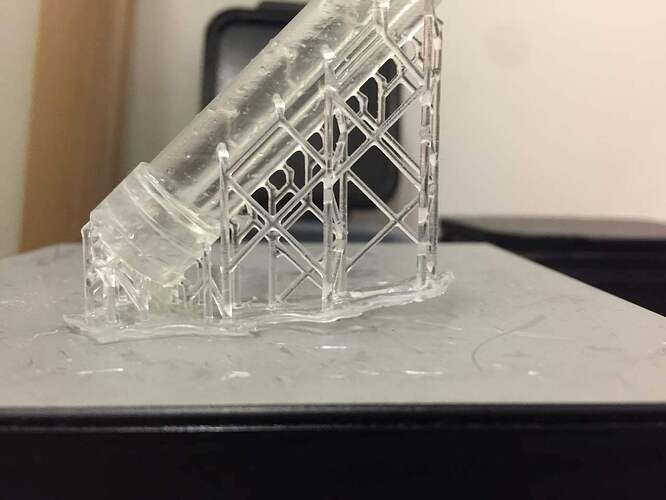 Sorry, forgot to say that the Clear Resin is Version 2 (FLGPCL02).

Same thing (after Firmwareupdate) happens to me with black resin, but my parts fall off build platform

It looks like the base is too thin, it looks almost half what I would think it normally would be.

The print after this print was successful. The reason may be one of the two or both:

Now I have to turn the printer on, wait for the resin tank to heat to 30°C, and start the print. Hope the support team put this function back in the next firmware update!

There is a very similar thread going on here.

Another version for preheating: :-))) before the first print of the day I begin with preform 2.6, preheating up to 28-29 degrees and cancle this print at this temperature. Then start with Preform 2.7.1 and start the first print, no prblems with sticking to the platform. Kalle