Cannot seem to get this print to work right... any suggestions?

Okay I have printed this in a couple different resins and a lot of different orientations and it seems that I keep being hit and miss. I have one of these that is 95% open the rest seem to have all the pockets fill with resin. Any suggestions? i have not tried printing directly to the build platform yet but not sure how it would turn out either…

Best success was with white resin at 0.025 resolution and oriented with the x at 45* … just cant seem to replicate it… 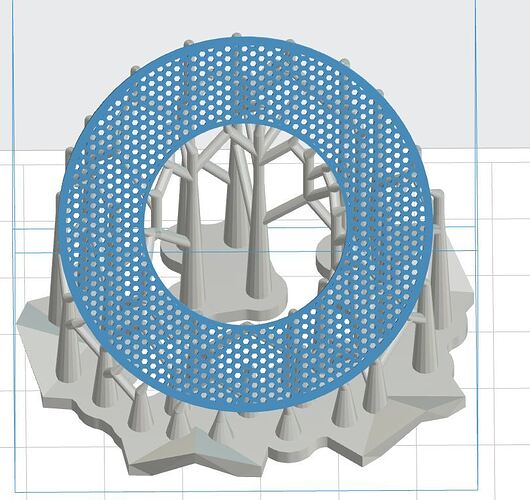 My guess is that your opeings are ~1mm or so.

First, I would eliminate all of the incomplete holes for starters, as it’s likely those that are failing consistently.
Next I would print it exactly vertical, not leaning as you have shown, oriented such as to have the hole flats vertical - not horizontal as you have in your image.
I would allow the supports to only contact the horizontal edges of the outside and the inside circles
Then, I would layout the part so from the top view, the thin length ran from hinge to peel.
Print @ .25um.

edit: hmm - looking at the file, it’s way thicker than your image lets on. It looks like a thin disk in the pic. I think I would rotate the layout 180d, leaning it away from the hinge side. I’m playing with it a bit now…

yeah sorry hard to show the size of the hex holes (they are 0.5mm) small I know but it is what I need to manufacture for a prototype that I am working on. I have not tried completely vertical that was going to be my next test as well. I currently have one running right now but plan on running the vertical when it completes. Hopefully it gives me something other than a half filled honnycomb lol

Hi @Thomas_Judy - wow… THAT is ambitious. No way I can be sure I can help, but my observations when trying to print something round: you HAVE to print as flat as possible, completely flat if at all possible (it is possible sometimes - had another success with that today printing a flexible sealing flat to avoid any trapezoidal deformation due to model tilt and the accompanying x/y shrinkage with increasing z distance from the build platform).

Your part may work direct on the platform, but with a part that size I would suspect you’ll have 2 problems: a) uneven thickness due to build platform/silicon tank base non-alignment, as well as b) the part will stick like a SOB and you’ll damage it getting it off.

So, I know it kinda flies in the face of standard FormLabs advice… but try printing it completely flat with LOTS of support points (like about AT LEAST 25x as many as you have) but a relatively thin base (say 1.6-1.8, which will work if the platform is pretty much level to the the tank base) so that you can peel it off afterwards. If a model is flat, and you probably know this already, the adhesion of the current layer to the silicon base has to be less than the stress of this adhesion spread across the number of support points. In such a case I ALWAYS go for tons of 0.4mm dots around the perimeter to avoid the ‘suspension bridge’ effect you otherwise get on an edge. The same will go for here all over due to a flat orientation and LOOOOTS of ‘edges’… like I said, ambitions

Also, particularly lots of supports around the outer edge will help to force the base to have a large surface area which will reduce the risk of the model being pulled off the platform.

I would also set the height above base to 7-10mm… since the model is flat it’ll still print quicker than at the moment, so you’ll know pretty soon, and this will help to ease reflow of resin during peel; white is probably most likely to work due to the combination of low viscosity and shorter laser exposure time (so less effect from flare).

I would also think you can print at 100µ without any worries at all since you are printing flat and therefore don’t need to worry about the layer resolution… another time (and most likely quality) win… a test print should be done in about 50-55 mins, I think.

One last hint: reduce the thickness of the walls by about 0.1-0.15mm… my experience is that all external dimensions are about +0.1mm or more too big, due to the size of the laser ‘dot’ (you can see in PreForm that the perimeter will be traced, and since the ‘dot’ has a finite diameter, the result is an oversize perimeter) and as a result all internal dimensions at least 0.1mm too small, i.e. if you need a wall thickness of, say, 0.5mm, set it in your CAD to 0.4mm, perhaps even slightly less… that will help with both a) keeping the holes open, as well as b) reducing the layer-tank base adhesion forces.

If you upload a .STL file (even better SolidWorks?) I might (underline might… I’m printing almost 24/7 at the moment for a research project) have time to have a go myself at the weekend, if you like - the part is not so big; you could also try printing a thinner version as a test, which will also be no problem with a flat orientation.

P.S. I can’t use anything newer than 1.8.2 since the laptop driving the printer is an XP machine… I can install 1.9.0, it fires up, but there is something somewhere I can’t see due to graphics problems and I just can’t get to the point of using it. So, stuck with 1.8.2 for the moment…