Base layers filled in

I’ve had my Form 2 for nearly 2 years now and it’s been a great workhorse. But for a few weeks now, my print load has increased due to high demand and sometimes I let the base rafts intersect so I can get everything printed in time. And often when I do that, the rafts become filled to the height of the raft edges, which makes it particularly difficult to separate parts because the areas between the rafts sometimes get filled in as well. The parts themselves still turn out perfect, but the thick rafts are concerning. If I print with nothing overlapping, then it prints normally for the most part, though I once in awhile get small very thin flakes of slightly cured resin around parts of the rafts, but nothing excessive. You can see in the attached image, the filled in rafts and the areas between the rafts filled in with fully cured resin at about the same thickness as the thin inner areas of the rafts. Not really sure if this is a glitch or not. If it happened also when the rafts weren’t overlapping, then I’d think it was more mechanical, but as soon as I overlap them, this issue pops up. 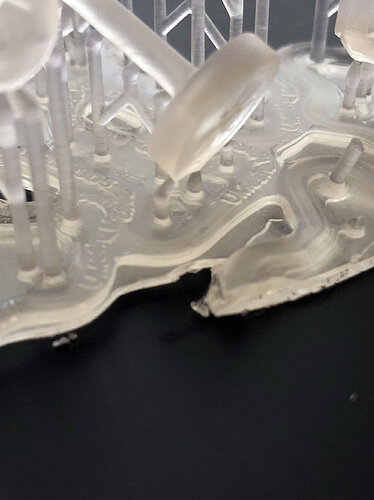 Had a similar issue recently, turns out the galvo mirrors were dirty. Most of the parts I was printing turned out fine, but I had issues with small details and this “filling” of the gaps in between rafts. Ended up thoroughly cleaning the whole path of the laser (galvo, big mirror under the tank, optical window, tank’s underside) which solved the problem.

Since Formlabs seems to have issues with their support website this week-end, you might wanna print this by yourself :

If the number on the columns aren’t all clearly visible (it’s normal for the column to be a bit deformed, it’s part of the test), or if the features of the centerpiece are not well resolved then you might wanna first look into cleaning the tank and the optical window, then contact formlabs if nothing has changed.