Why does Form 2 keep Sensing Resin after it knows the cartridge is empty?

I did a small print today using an empty cartridge but with plenty of resin in the tank (way more than enough for this print).

As expected, Preform prompted me that my cartridge was almost empty before it began, and I told it to Ignore.

However toward the end of the print, I noticed after each layer, the printer paused for a while with the message “Sensing Resin”. Why would it bother trying to measure the resin level when it knows there’s no more left in the cartridge? It’s not like it can do anything about it. It just seems to needlessly delay the print.

Also, has anyone ever been prompted about low resin twice in the same job? I’m pretty sure that happened to me, as partway through the print (after the first layer had completed) the printer paused and wanted me to hit ignore again on a similar message. I think perhaps the first warning was along the lines of “I think this cartridge is almost empty” and the second one was “this cartridge is empty”.

They’re both really annoying. I wish Formlabs gave us a reliable way to ignore low resin warnings for the duration of the job, so you don’t wake up the next day only to find the printer sitting at the halfway mark waiting.

I have been mentioning this for years. Extremely annoying. I think they did make some improvements to it but it is still a pain. I have not used our Form 2 since the Form 3 was released though.

Yeah. Preform needs a checkbox that says “ignore resin level for this print”. How hard could it be?

It happened again and I gained some clarity on the “double prompting”.

A while after I started the print, while the printer prepared itself but before it began printing, I got this: 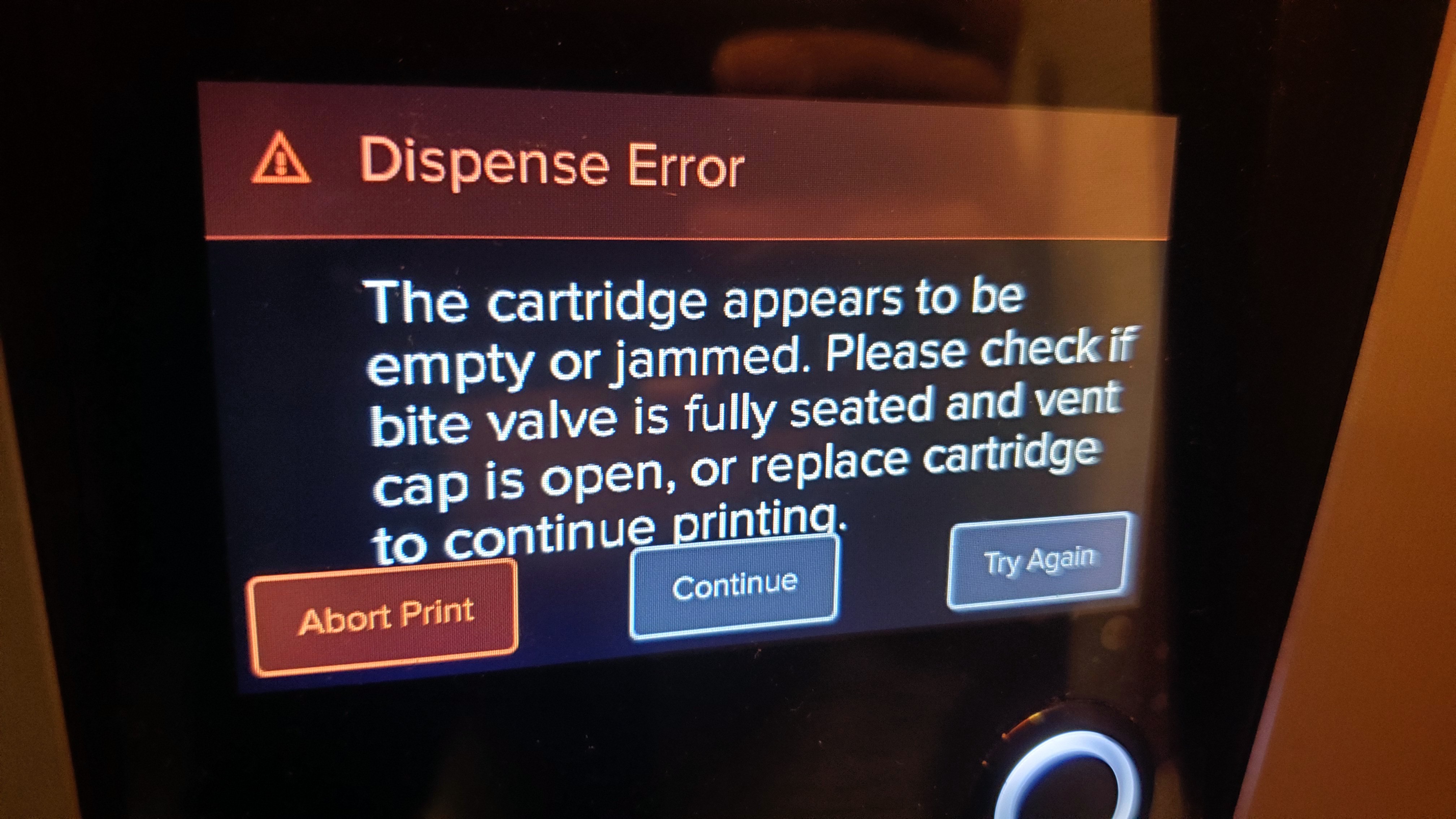 Then on hitting Continue: 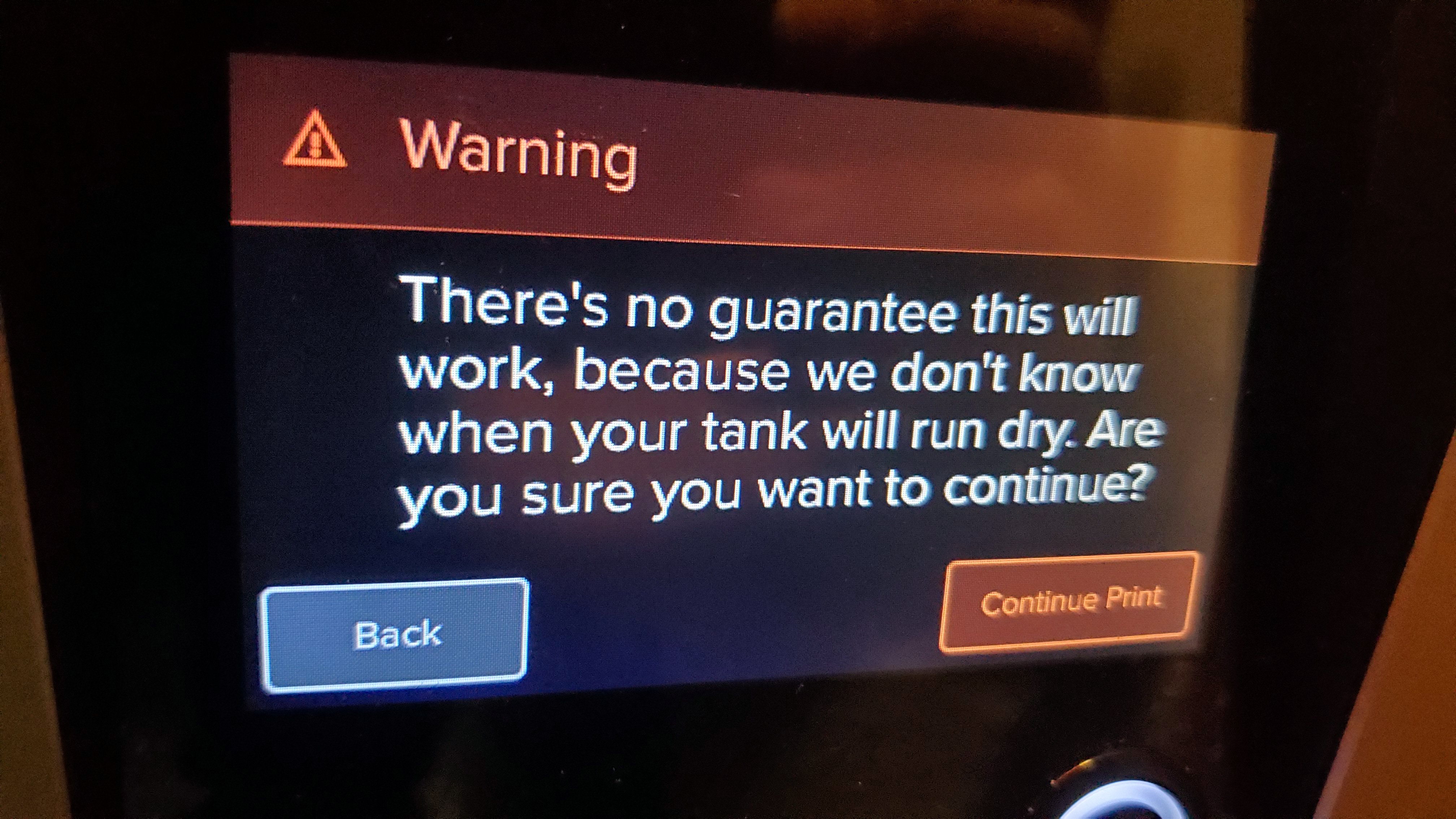 Some minutes later, just before it began the first layer, it showed this: 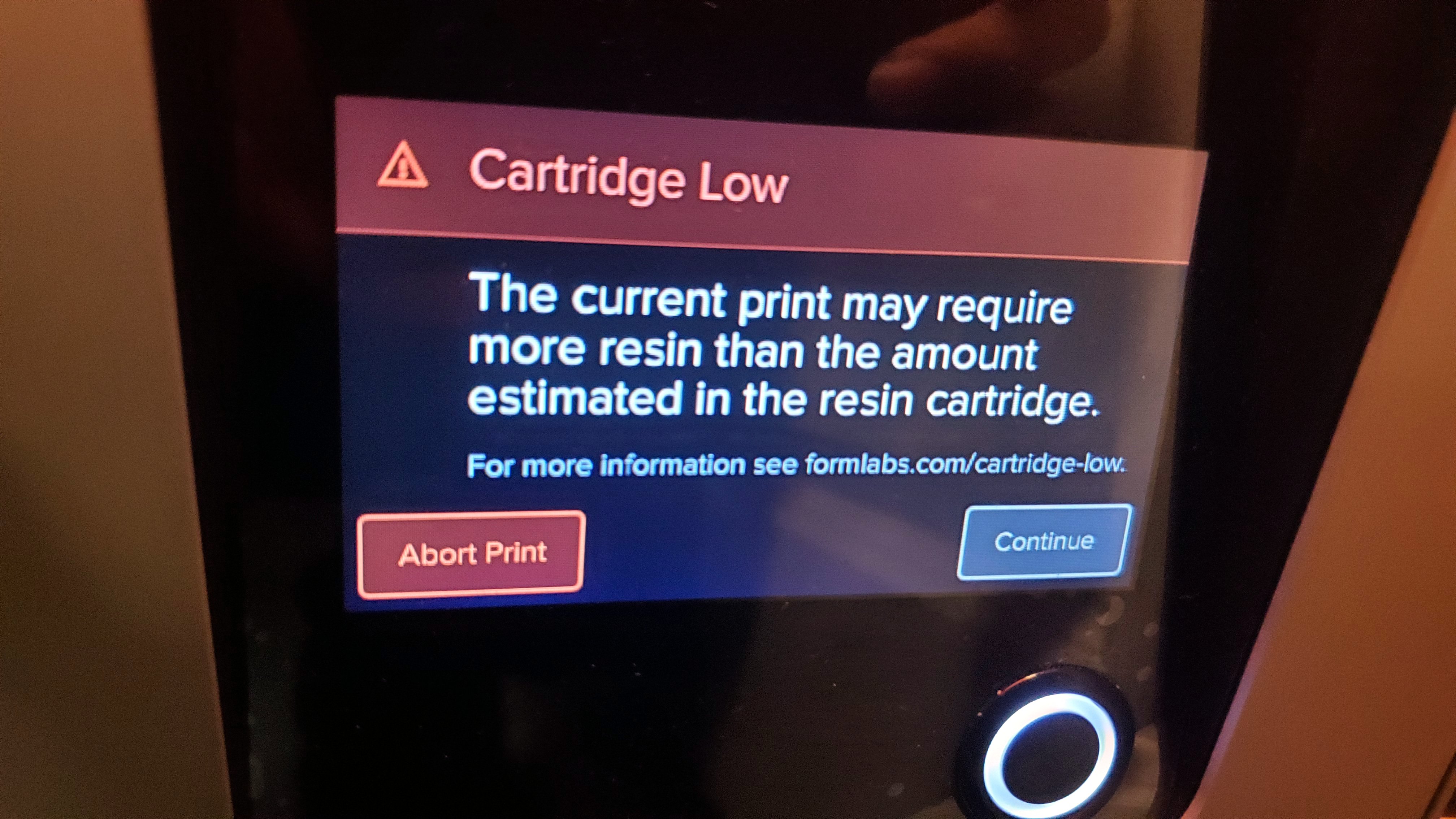 So the first messages says “Your cartridge isn’t providing resin” and I presume the last is something like “According to the dispense count on this cartridge it appears empty”. Not sure if the redundant prompting is by design.

Last night I did the override at the beginning to get it started printing. The cartridge was nearly empty.

This morning I woke up to find it paused at layer 1055 of 1704 with a “Dispense Error” message. Very frustrating.

An “Ignore Resin Level for this Print” toggle would be very welcome.

I’ve run into this as well. Sometimes you come back to a print that has stopped while printing, which can ruin the print job, or even worse a print that senses resin after each layer.

I think if they just added a toggle then you could use aftermarket resins without being in open mode—this will never happen. Maybe the toggle could also disable the bite valve?

I don’t think adding a toggle would yield any extra capability with regard to aftermarket resins than you already have when an empty cartridge is installed.

It would just get rid of this highly annoying (and quality-reducing, i.e. a big layer line at best) edge case that users keep bumping up against (no matter what resin is installed). I expect Formlabs’ print farms and offices don’t feel this pain as much as we do since they have unlimited cartridges to pop in.

I also have the same problem with the resin level.
I can no longer print in normal mode.
Can we disable this sensor?
Can we cover this sensor so that the tank is always full?
Why has Formlab never solved this problem that has existed for years?

Perhaps what is a problem from our perspective might just be a “solution” from theirs. See last photo in first post here.

They probably don’t want to find the solution to sell more resin. But this is not good behavior of a large company